San Francisco, CA (UroToday.com) Multiple clinical trials are investigating the efficacy of PARP inhibitors in men with metastatic castration-resistant prostate cancer (mCRPC) with somatic and/or germline (DNA damage repair) DDR alterations. Talazoparib is a PARP inhibitor that both inhibits and traps the PARP enzyme with in vitro studies demonstrating that talazoparib has greater PARP-trapping activity than other PARP inhibitors. Talazoparib is FDA approved for women with breast cancer with a germline BRCA1/2 mutation.

TALAPRO-1 is an international Phase II study (NCT03148795) evaluating talazoparib in men with mCRPC and DDR alterations. Eligible men have measurable soft tissue disease, and a mono-allelic or bi-allelic DDR alteration in one of the following genes: ATM, ATR, BRCA1, BRCA2, CHEK2, FANCA, MLH1, MRE11A, NBN, PALB2, RAD51C. In this study, the investigators reported results of a planned interim efficacy (primary endpoint: best overall soft tissue response rate by RECIST criteria) and safety analysis. At the time of analysis 81 men were treated with talazoparib 1 mg daily. Of these patients 58% had discontinued treatment; median duration of treatment was 16 weeks. 43 patients had received treatment for at least 16 weeks and were eligible for evaluation of the primary endpoint; all had received prior docetaxel and half had received prior cabazitaxel. The following DDR alterations were present in the primary endpoint cohort: 41.9% BRCA2, 32.6% ATM, 4.7% BRCA1, 4.7% PALB2, and 16.3% other.

Radiographic progression-free survival (rPFS) was 5.6 month in the overall cohort. Categorized by DDR alteration, median rPFS was longer in patients with BRCA1/2 alterations (8.2 months; 95% confidence interval 5.6 to not evaluable) compared with patients with other alterations (range 3.2 to 4.7 months). 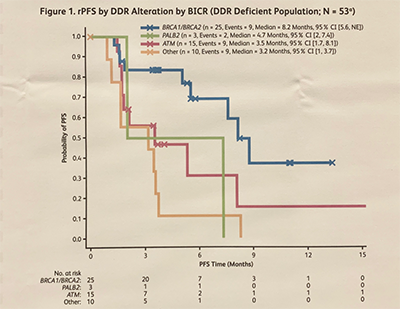 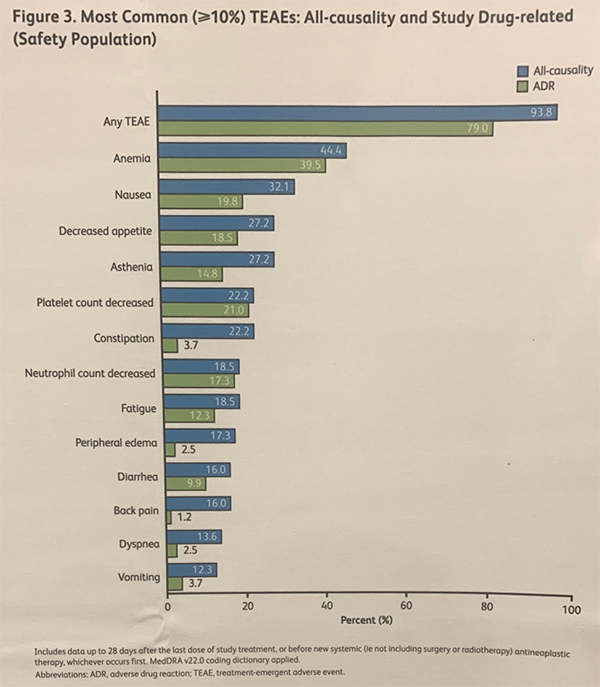 The authors concluded with the following take-home points: