San Francisco, California (UroToday.com) The phase 3 ALSYMPCA trial (NCT00699751) of the alpha emitter Radium-223 in patients with bone but not visceral metastatic disease showed an improvement in overall survival as well as Quality of Life. The impact of this radiation exposure on risk of second malignancy was found to be low after three years of follow-up, but longer-term real-world data has not yet been published to further assess safety as well as confirm the overall survival benefit.

The REASSURE study (NCT02141438) was established as a prospective, global, single-arm observation study of Radium-223 usage. The primary outcomes of this study were incidence of second primary malignancy, bone marrow suppression, and other short/long term safety measures. Secondary outcomes were overall survival, incidence of bone fractures and bone-associated events, and patient-reported pain. Here the authors report patient outcomes after 7 years of follow-up.

In total, 1465 patients were included in the analysis at the time of data cut-off. Patient characteristics are shown below: 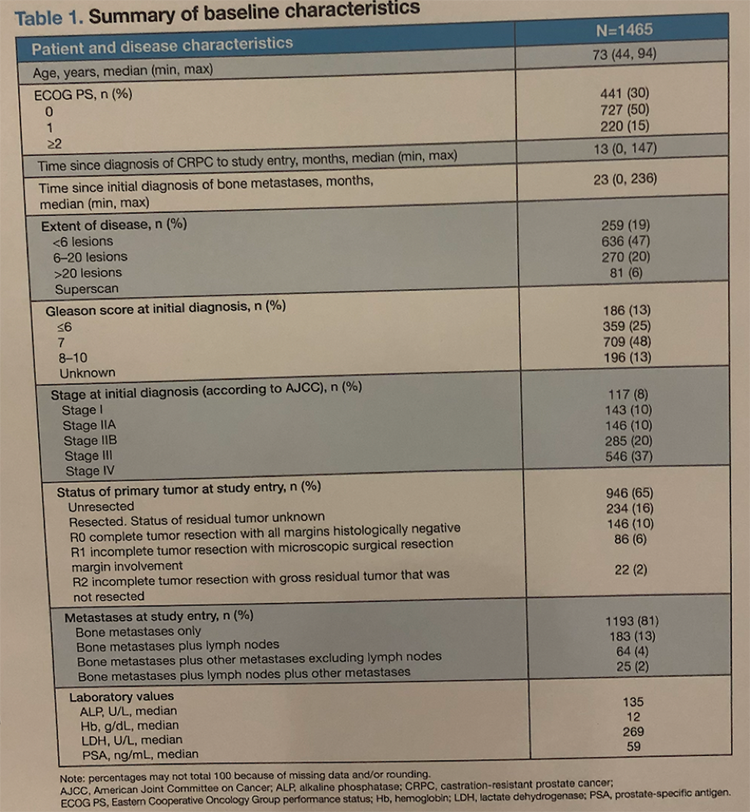 With regard to the outcomes, 15-second primary malignancies were observed in 14 patients. 10 of these patients had received prior radiotherapy in addition to Radium-223. Most commonly, patients received abiraterone prior to radium and received docetaxel after. 59% of patients received all six recommended infusions of Radium. The most common side effects were diarrhea (11% of cohort), nausea (9% of cohort), and anemia (8% of cohort).  A total of 12% of the cohort had bone marrow suppression due to therapy, with this occurring more commonly in patients who had chemotherapy prior or subsequent to Radium-223. The median overall survival was 15.6 months.

Overall, these data support the relatively low rate of second primary malignancies after Radium treatment as well as the overall tolerability and safety of this drug. When second malignancies occurred, they were more common in patients who had received some other form of radiation therapy. The overall survival in this cohort was similar to that of the treatment group of ALSYMPCA (14.9 months in ALSYMPCA versus 15.6 months here).