San Francisco, CA (UroToday.com) Radium-223 is a targeted alpha therapy that showed a survival advantage and favorable safety profile in the phase III ALSYMPCA trial in patients with mCRPC.1 Because Radium-223 therapy leads to radiation exposure, it is important to investigate the long-term risk of developing a second primary malignancy. A 3-year safety follow-up of the ALSYMPCA trial (NCT00699751) showed that the cumulative incidence of secondary primary malignancies was low,2 however, there are limited data on the long-term safety of Radium-223 in patients with mCRPC in the real-world setting.  The REASSURE study was designed to assess the short- and long-term safety of Radium-223 in patients with mCRPC in routine clinical practice over a 7-year follow-up. At the prostate cancer session at GU ASCO 2020, Dr. Celestia Higano and colleagues presented results from the second planned interim analysis of REASSURE.

REASSURE is a global, prospective, single-arm, observational study assessing the use of Radium-223 in patients with mCRPC and bone metastasis in routine clinical practice. The second prespecified interim analysis (data cut-off March 20, 2019) evaluated the safety and clinical outcomes of Radium-223 in patients with mCRPC. The primary outcome measures were the incidence of second primary malignancies, bone marrow suppression, and short- and long-term safety in patients who had ≥1 Radium-223 dose. Secondary outcomes included overall survival (OS), the incidence of bone fractures, number of bone-associated events, and patient-reported pain. The full study design is as follows:

The median number of Ra-223 doses received was 6, and 67% of patients had ≥5 doses. The secondary primary malignancy rate was only 1%, of which the most common were skin cancer and lung cancer (n=3 each). The most common treatment-emergent drug-related adverse event of any grade was diarrhea (11%). There were 10% of patients that had a bone-associated event, 5% had fractures, and 15% had a hematological adverse event. The median OS was 15.6 months (95% CI 14.6–16.5): 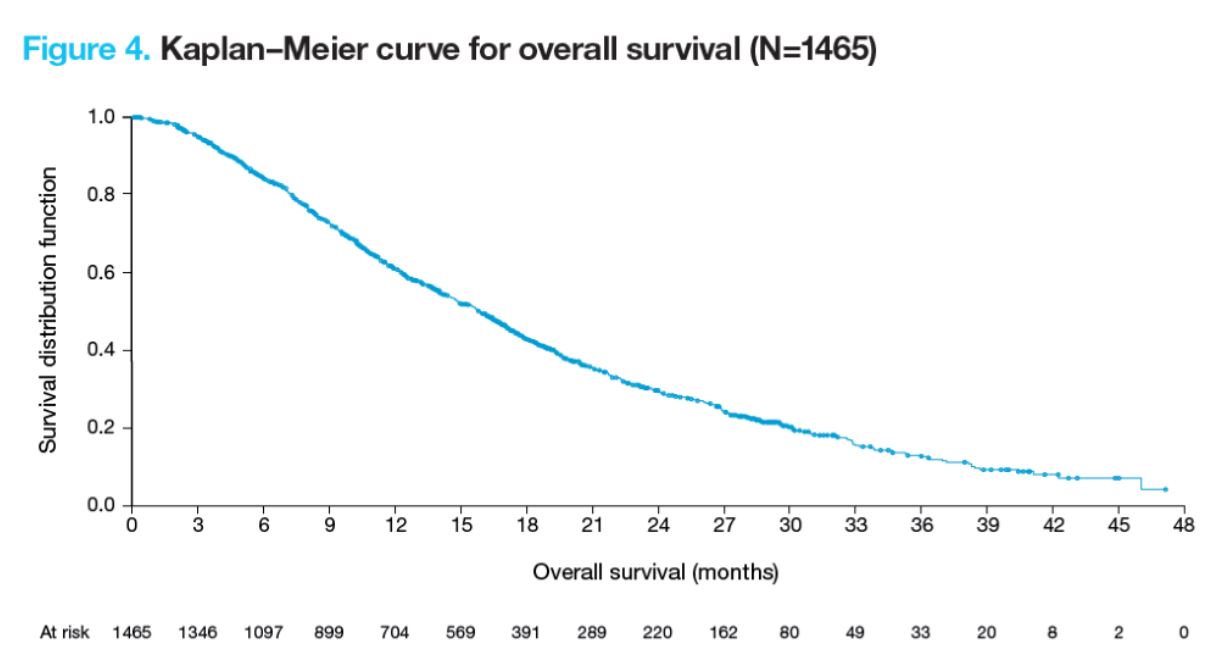