Study 1: Renal Cancer Surgery in Patients without Preexisting Chronic Kidney Disease – Is There a Survival Benefit for Partial Nephrectomy 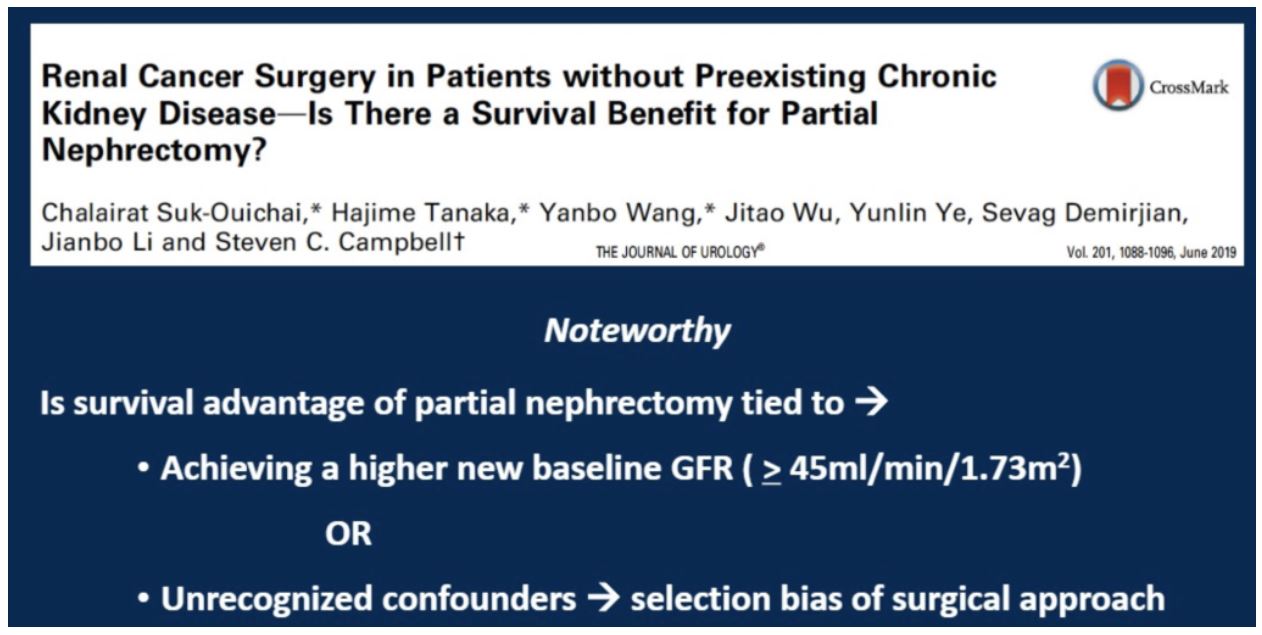 Prior retrospective studies have suggested an overall survival benefit for patients with localized RCC who undergo partial nephrectomy as compared to radical nephrectomy. The reasons for this finding are not fully characterized. In this retrospective study of 3,133 patients treated surgically for RCC between 1997 and 2008 at the Cleveland Clinic, the authors specifically explored if this mortality difference by approach could be related to the post-surgical GFR.

Within this patient cohort, 1732 patients had a partial nephrectomy and 1401 had a radical nephrectomy. The median follow-up was approximately 9 years in both groups. Based on prior literature, a threshold GFR of 45 was set for further analysis of the impact of GFR on non-renal cancer mortality.

When looking at all patients with post-surgery GFR over 45, again the 10-year non-renal cancer mortality was worse for patients who underwent radical nephrectomy. No differences in survival were seen in this cohort regardless of GFR level, so long as it was greater than 45. However, when a multivariate analysis incorporating post-surgical GFR, age, male gender and surgical approach was conducted, only surgical approach was significantly associated with non-renal cancer mortality.

Therefore, this study concluded that the difference in non-renal cancer mortality between surgical approaches is not due to post-surgical GFR, but rather a consequence of some other form of selection bias.

Together, Dr. Merrill concluded that these two studies further the argument for using partial nephrectomy to manage renal masses whenever feasible.

How can we facilitate more partial nephrectomies? One option is neoadjuvant therapy to shrink the localized tumor.

This study was a non-randomized phase 2 study that enrolled 18 patients with biopsy proven clear cell RCC whose characteristics were not felt to be suitable for partial nephrectomy. These patients were treated with 5-10 mg of axitinib BID for 2-6 months, with the duration and dose based upon side effects and radiographic changes. The primary endpoint of this study was the number of partial nephrectomies that could be performed for tumors downstaged to T1.

Tumor size ranged from median 76.5 mm (70-98), with median RENAL nephrectomy score of 11 (range 7-11). Three patients had to discontinue axitinib due to therapy-related adverse events. Of the 18 patients enrolled, 16 (89%) had tumor size reduction, with 12 patients (67%) achieving downstaging to T1 tumors that by definition were less than 70 mm. With regards to post-surgical complications, 3 patients suffered bleed or urine leak, and 1 patient had a myocardial infarction within 1 month of surgery.

Thus, within a small cohort, neoadjuvant axitinib appeared to facilitate partial nephrectomy in many patients, though more robust evidence (forthcoming in the PADRES – Prior Axitinib as a Determinant of Outcome of Renal Surgery) is required before making this a routine practice.

Dr. Merrill then briefly touched upon this study, summarized below. For conclusion #4, the patients in this cohort were compared to a group of those who underwent upfront surgical management without neoadjuvant TKI. 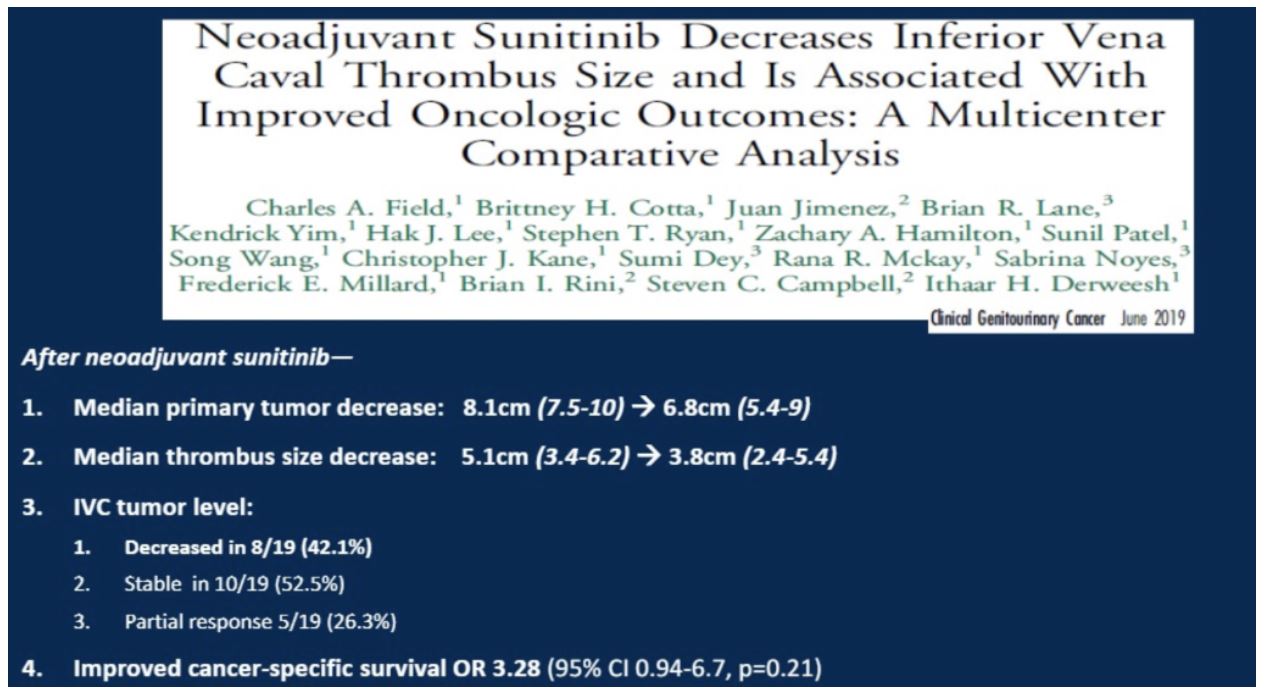 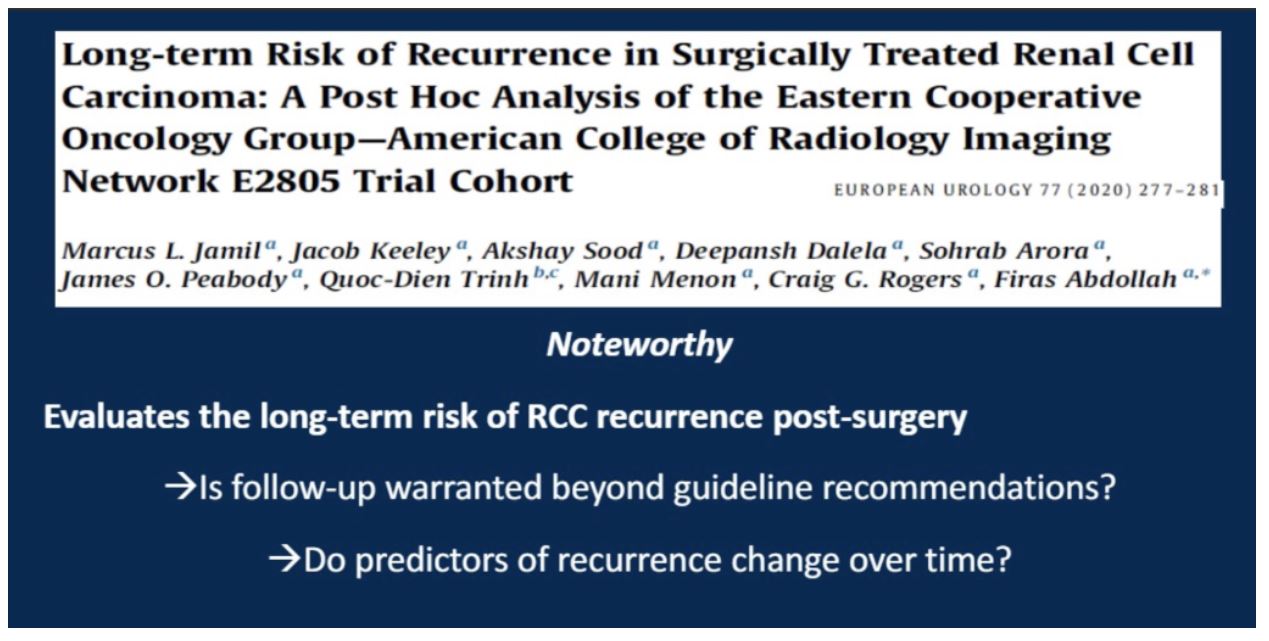 This study was a retrospective analysis of the ECOG-ACRIN E2805 ASSURE trial that looked at 1943 patients with intermediate or high risk RCC (pT1b or greater) treated with sunitinib, sorafenib or placebo post-surgery. The trial did not show differences in disease-free survival amongst the three groups. Using this cohort, for which all patients received similar follow-up and imaging schedules, the authors looked at the 730 patients that recurred to calculate recurrence rates at 12-month intervals and look at how predictable these recurrences were at each time point.

Dr. Merrill discussed that longer follow-up after five years may be necessary, though alternative predictors of recurrence are needed to accurately stratify patients after this time point. 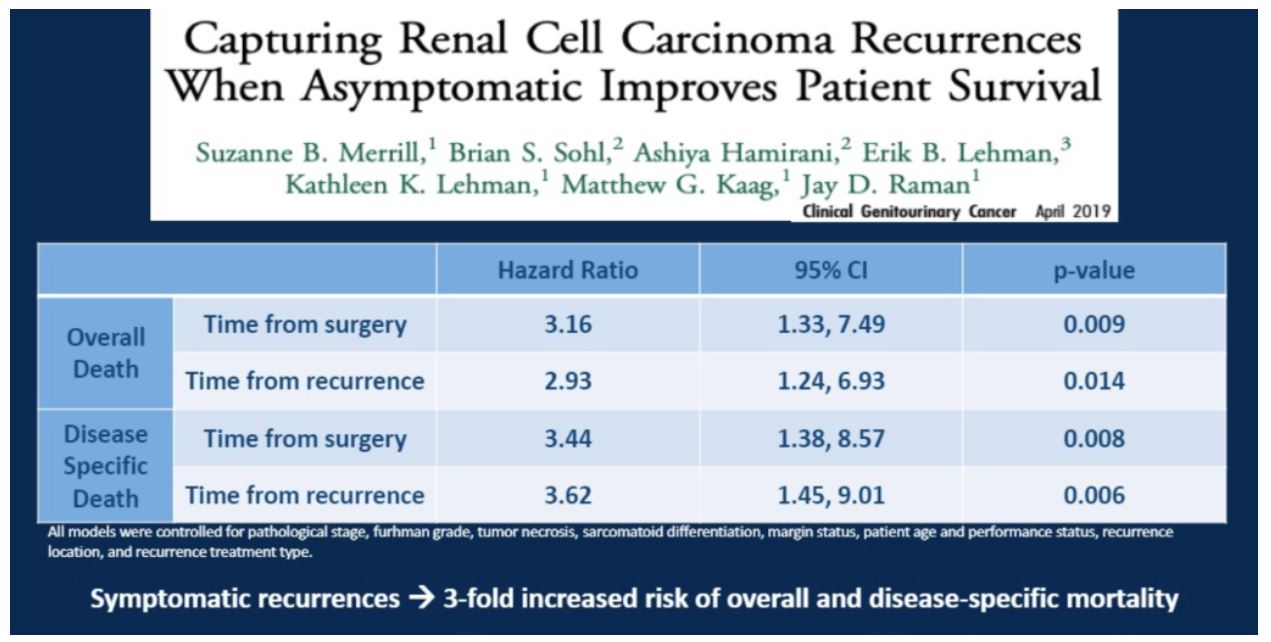 In this study from Dr. Merrill’s research group, the authors found that after controlling for pathological characteristics and lead time bias, identifying asymptomatic recurrences during routine follow-up was associated with a lower risk of overall and disease specific mortality.