San Francisco, California (UroToday.com) In this presentation, Dr.  Donna Hansel discussed the pathology papers that have come out in the last year or two. Her talk, in general, focused on refining diagnostic criteria for rare entities within renal cell carcinoma, especially those for which molecular and patient history information is emerging as critical to making accurate diagnoses.

This was a study looking at 100 cases to dissect the morphologic differences and identify immunohistochemical and genomic markers to accurately delineate between three rare RCC subtypes: renal medullary carcinoma, collecting duct carcinoma, and fumarate hydratase-deficient carcinoma. These three entities can be difficult to differentiate, as illustrated in the example provided by the presenter: 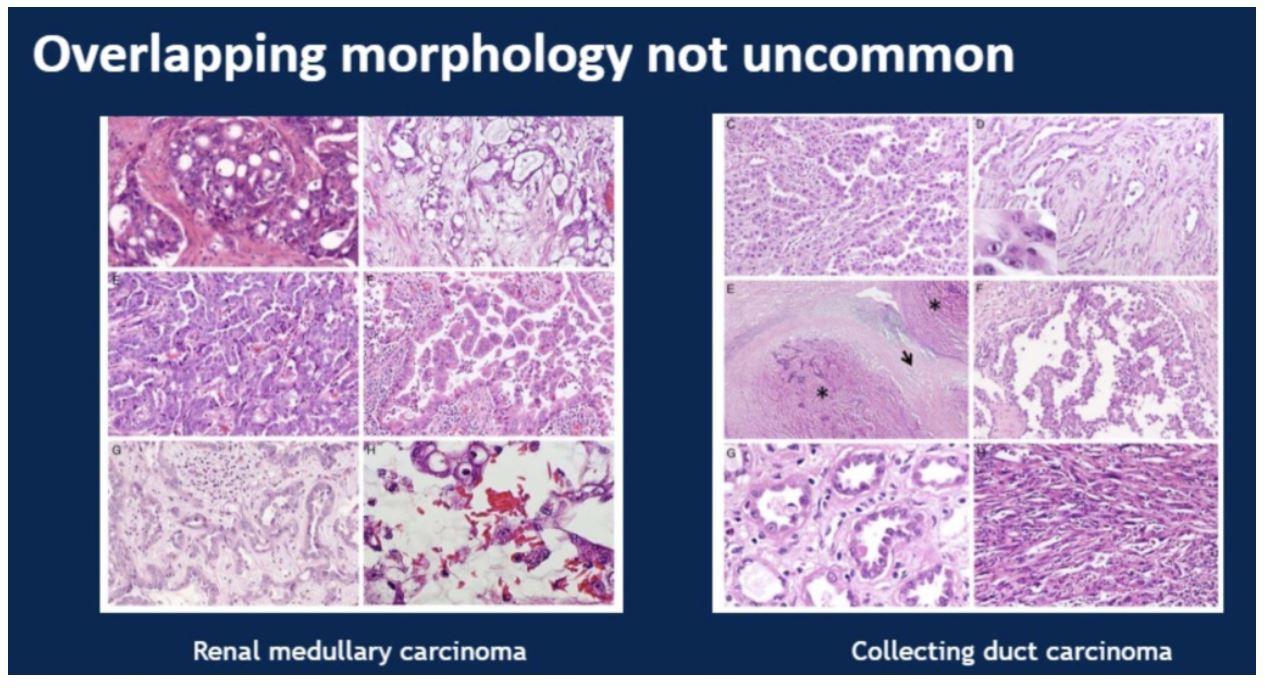 This study emphasized the role of patient history in stratifying between these three entities. Of particular importance is a history suggestive of sickle cell hemoglobinopathy in combination with INI1 expression. Also, any suggestion of an autosomal dominant pattern family history of uterine pathology or skin lesions (leiomyomatosis) or kidney cancer could be suggestive of FH-deficient RCC.

In this study, more specialized staining using antibodies not available in all labs for FH and 2SC, 25% of the cases initially classified as collecting duct carcinomas were reclassified as FH-deficient RCC.

To summarize this study, Dr. Hansel showed the following slide that identified unique and common morphologic features for each subtype as well as how IHC can help distinguish between the three entities. She especially highlighted the cases of where IHC for FH was not clearly positive or negative. These equivocal staining levels can be seen in all three subtypes, emphasizing the importance both of family history as well as 2SC staining for diagnosis.

In this study, the authors described the clinical characteristics of a cohort of 32 patients ultimately diagnosed with molecular testing as having FH deficient RCCs. The age at diagnosis varied greatly, with a median of 43 years and range 18 to 69. The disease was more common in males relative to females at a ratio of 2.2:1. The presence of leiomyomas was 40%, with a family history of this condition documented in 30% of the cohort. Reflective of disease aggressiveness, at 16 months post diagnosis, 50% of patients had died from their disease and 31% of patients were alive with active disease.

Pathologically, tumor size also varied greatly with a mean tumor size of 6.5 cm and range from 2.5 to 28 cm. Almost three quarters of cases were diagnosed as pT3a or greater, with 41% diagnosed with regional lymph node metastasis and 22% with distant metastasis.

Importantly, the authors broke down the original diagnosis in these cases. Although the cases often appeared similar grossly, they were often misclassified based on morphology. Of the original 32 diagnoses, only 12 tumors were correctly diagnosed. 7 tumors were initially unclassified, 6 were called as papillary RCC, 4 were diagnosed as collecting duct carcinoma, 1 as a tubulocystic RCC, 1 as a high-grade clear cell RCC, and 1 as a metastatic RCC NOS.

The findings of this paper echo those of study 1, highlighting the difficulty of accurately classifying FH-deficient RCC on the bases on gross and morphologic appearance, resulting in missed diagnoses in a significant proportion of cases. The routine incorporation of either fumarate hydratase IHC or mutation testing, especially in cases where the tumor either lacks expression of CK7, or the patient presents at a young age or has a family history of RCC or leiomyomas, is critical. The authors also note that FH IHC is not perfect, as it may miss up to 9% of cases that have a missense mutation in the protein that results in a deficient phenotype but does not change total protein expression. Finally, the authors point out that patients diagnosed with FH-deficient RCC should undergo genetic testing to modify their general health screening moving forward.

In total, 37 tumors were included, with the breakdown of number of amplified, rearranged, or both tumors shown in the table below. As illustrated in the table below, while there were differences in morphology by mechanism of alteration, there was considerable overlap. Only the presence of “biphasic features” was exclusive to TFEB rearrangement. TFEB amplification was statistically more commonly associated with an eosinophilic-predominant cytoplasm, whereas TFEB amplification was statistically more associated with a predominantly clear cytoplasm. The presence of WHO/ISUP grade >=3 was more common in TFEB amplification. 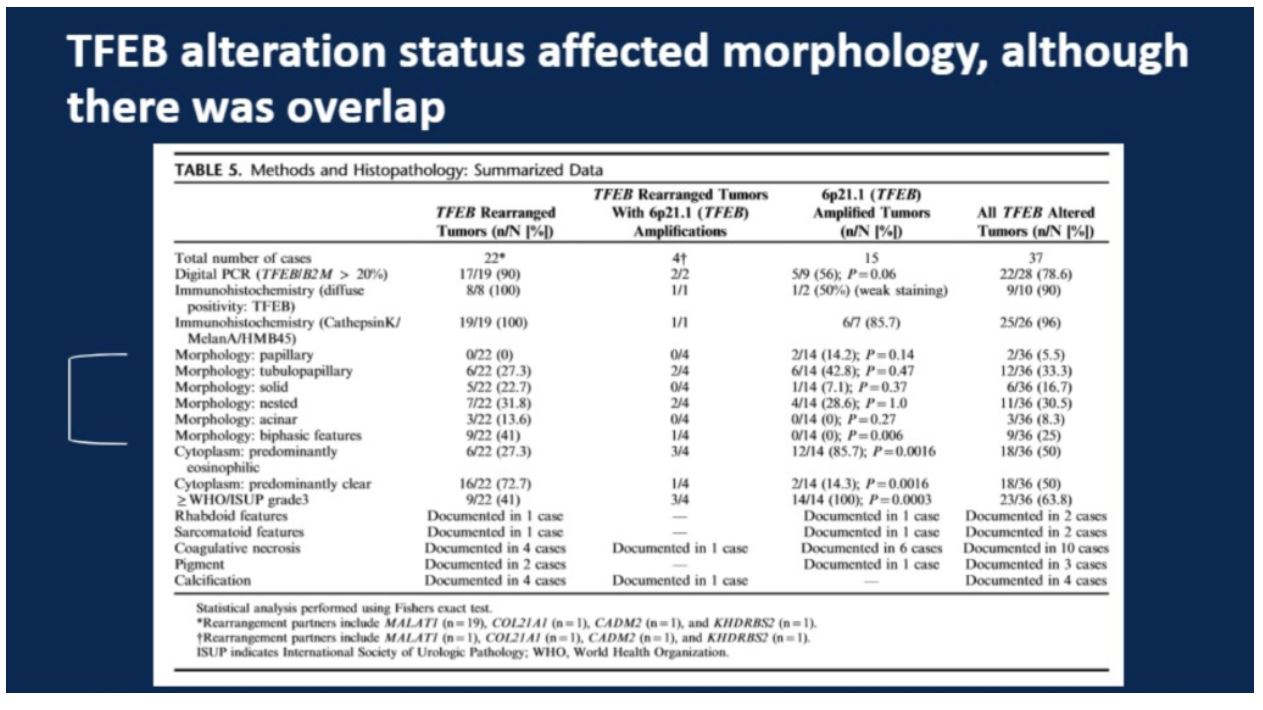 When looking at RNA expression amongst the two mechanisms of alteration, rearrangement cases had higher levels of TFEB expression. This is significant because IHC may more readily detect TFEB alteration in these cases and could be more likely to miss the more aggressively behaving TFEB amplified tumors.

The study then proposed the model illustrated below of the differential metastatic potential between the two different subtypes of TFEB alteration, essentially suggesting that the more aggressive behavior of amplified tumors could be related to the co-amplification of other genes that could drive proliferation and tumor survival such as VEGFA and CCND3.

Dr. Hansel chose to discuss this study that predominantly focused on melanoma, though there were some pre-immunotherapy RCC cases studied in this paper as well.

This study built on prior work suggesting that B-cell infiltration in tumors that receive immune checkpoint blockade may help select for therapy responders. To confirm that finding, this study used longitudinal samples from both high-risk resectable melanomas as well as some metastatic RCC cases. RNA sequencing was used to analyze expression of B cell markers, and the study authors also examined tertiary lymphoid structures and B-cell subtypes by single-cell analysis within the samples.

The key findings of this study are that patients whose tumors responded to immune checkpoint blockade in melanoma and RCC had higher density of CD20-expressing cells (B-cells), and more tertiary lymphoid structures within tumors. Furthermore, single-cell analysis of B-cell populations within tumors and peripheral blood showed a switch from a low proportion of memory B cells as compared to naïve B cells in the peripheral blood towards a higher ratio of memory B cells and less naïve B cells in the tumor.

This study suggests that additional analysis of the immune infiltrate in tumors that are to undergo immune checkpoint blockade may help understand which patients could respond. Beyond PD-1/PD-L1 status, analysis of either CD20 expressing cell density or amount of tertiary lymphoid structures may be informative.

Despite an increased understanding of the molecular basis of rare subtypes of RCC, approximately 5% of patient cases remain unclassified, in part because of limited abilities for diagnostic labs to perform cytogenetic studies (chromosomal structure studies) in addition to IHC. In this study, the authors looked at 40 challenging cases (18 unclassified, 5 hybrid oncocytic cases, and 11 metastatic clear cell tumors) to explore the added value of the OncoScan FFPE assay kit. The OncoScan assay used in this study was a microarray-based test for FFPE samples that contains probes that are designed to provide copy number aberrations and loss of heterozygosity information across known cancer genes.

Of the 18 unclassified and 5 hybrid cases, 19 were reclassified. Ten were reclassified as clear cell tumors, 2 were collecting duct, 2 were solid variants of papillary RCC, 1 was a TFEB-amplified (but no translocation), 3 were eosinophilic variant chromophobes, and 1 was an oncocytoma.

This study highlights the potential utility of cytogenetic analysis to identify unclassified renal cell carcinomas, especially those with mixed oncocytic features. However, the startup costs for this are not trivial. The cost of chromosomal genomic array testing in this study was $200K for the equipment and $600 per patient sample.