The hypothetical case was that of a 65-year-old man who presented with gross hematuria. CT scan of the abdomen and pelvis revealed a 15 x 12 centimeter right renal mass with level 1 tumor thrombus and a 2.5-centimeter retrocaval lymph node. CT scan of the chest and bone scan were negative. He underwent surgical resection of a pT3bN1R0 clear cell renal cell carcinoma (RCC). The patient was started on active surveillance and 12 months later CT chest demonstrated multiple asymptomatic 3-centimeter metastases in both lungs. Biopsy showed metastatic renal cell carcinoma. He was seen by medical oncology who started him on axitinib plus pembrolizumab. After three months on therapy, the patient underwent a CT scan of the chest, which showed 25% growth in the existing pulmonary lesions and no new lesions, consistent with a progressive disease by RECIST criteria. Other than Grade 1 fatigue and hand-foot syndrome, the patient remained asymptomatic.

At this time the audience was asked to weigh in on their choice for the next steps in management. Audience responses are listed in red in the slide below. 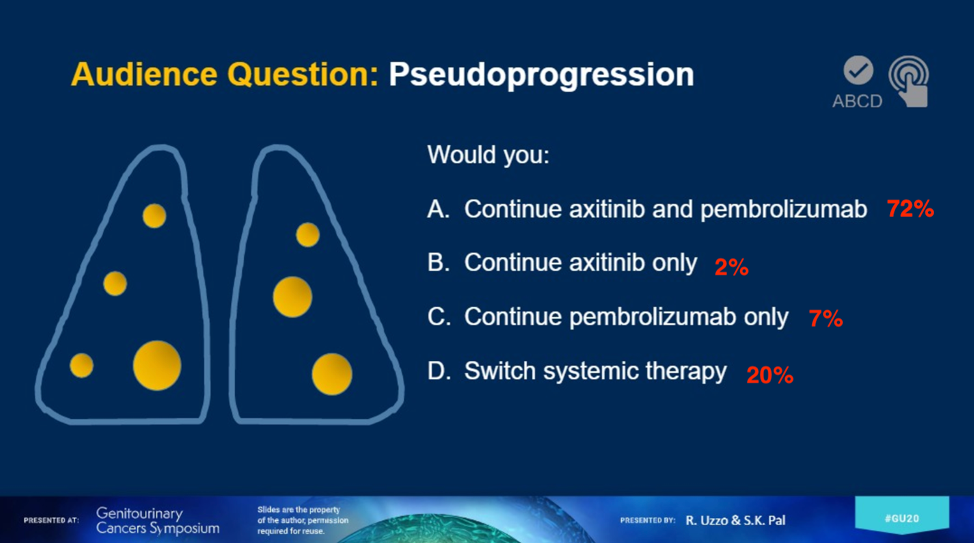 The use of various systemic therapeutic approaches in metastatic RCC – including VEGF inhibitors, mTOR inhibitors, and immune checkpoint inhibitors – warrants awareness of novel response patterns beyond traditional size-based response criteria (RECIST). Atypical patterns of response can include delayed response to treatment (compared to cytotoxic chemotherapy), long-term stability of tumor size, or transient enlargement of tumors or new tumors appearing followed by shrinkage of tumors (pseudoprogression). Pseudoprogression is caused by immune cell infiltration of the tumor with or without edema. Radiographically, this results in a continued increase in the size of the tumor during the development of the host anti-tumor response followed by long-term stable disease, partial response, or complete response. New lesions can also appear, as a result of an increase in the size of micrometastatic disease, initially too small to be visualized with imaging, that become larger from tumor immune cell infiltration and detectable on post-treatment imaging. Hyperprogression is a distinct phenomenon that can occur in RCC and other solid tumors treated with immune checkpoint inhibitors defined as a rapid increase in tumor growth rate (minimum twofold). Representative radiographic findings for pseudoprogression are shown in the slide below with emergence, then the resolution of an axillary lymph node noted with the white arrow. 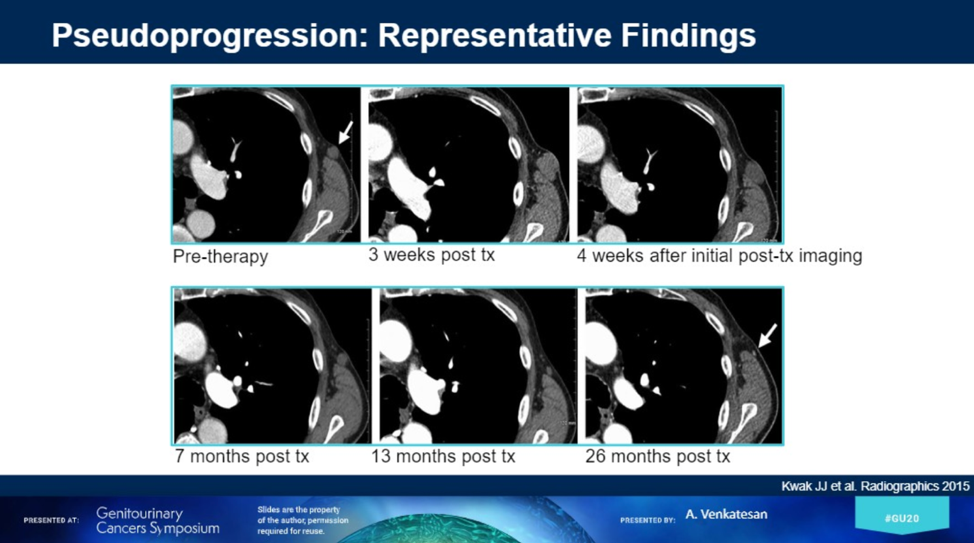 Dr. Venkatesan reviewed practical imaging considerations for patients with RCC treated with immune checkpoint inhibitors. Because of a potentially delayed response to immunotherapy, imaging assessment of response or progression should be made with two consecutive follow-up imaging studies performed at least four weeks apart. Unlike with previous solid tumor response criteria, new or enlarging lesions do not necessarily represent progression. Hence, follow-up imaging should be performed at least four weeks later to assess for further changes in tumor burden. This approach for determining progressive disease, used in the iRECIST criteria differs from RECIST 1.1 criteria. 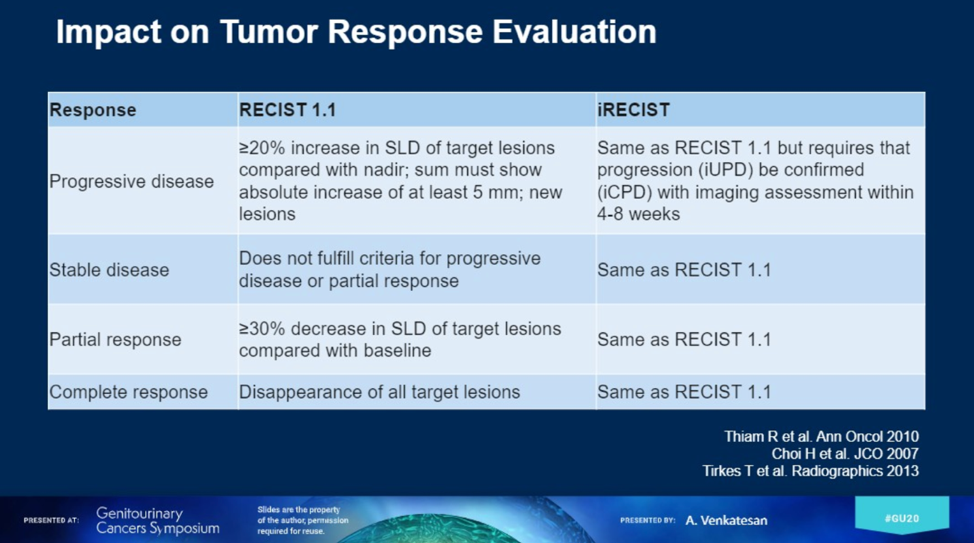