San Francisco, CA (UroToday.com) The role for cytoreductive nephrectomy (CN) in metastatic renal cell carcinoma (RCC) was established in the cytokine era. In the current era, with more effective therapies (VEGF tyrosine kinase inhibitors [TKI] and immune checkpoint inhibitors [ICI]), the role of CN in metastatic RCC must be reconsidered. A number of studies re-evaluated CN in the VEGF TKI era, all finding it to be associated with improved overall survival. Notably, all of these studies were retrospective and therefore limited by the inherent selection bias of which patients were referred for CN. 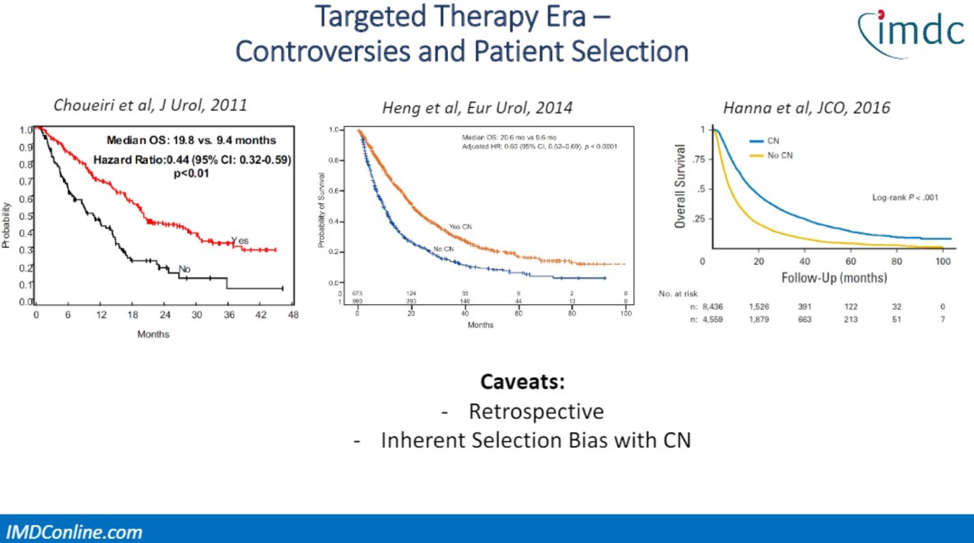 Limitations of these retrospective analyses highlight the importance of the CARMENA Trial, which randomized patients with intermediate and poor risk metastatic RCC to sunitinib with or without CN. With over 5 years of median follow-up, there was no difference in overall survival between the two treatment arms. Caveats to these results are that the trial did not include good risk patients and the cohort had poorer than expected outcomes, which may make patients less likely to benefit from CN.

Investigators from the International Metastatic RCC Database Consortium (IMDC), led by Dr. Ziad Bakouny, sought to address whether there is still a benefit to CN in the current era and, if so, how this benefit compares between patients who received first-line targeted treatment (TT) or first-line ICI-based treatment. 4,639 patients with metastatic RCC from 40 centers were included in this analysis. Multivariable analysis was performed to control for age, histology, presence of sarcomatoid features, IMDC risk group, adverse (bone, brain, liver) metastases, and treatment type. To further account for selection bias, the authors utilized the propensity-score based method inverse probability of treatment weighting. 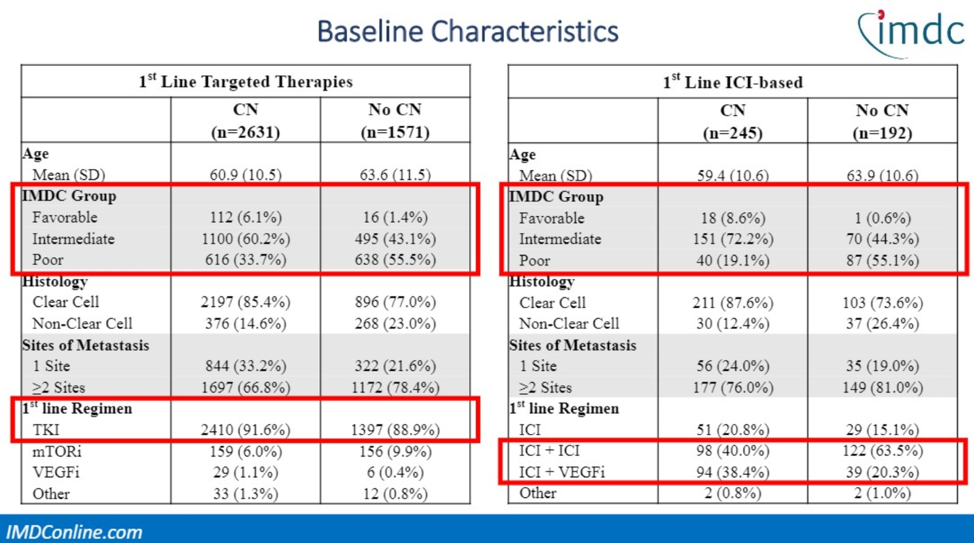 The investigators first asked, what is the profile of patients getting CN? They found that CN was more likely in patients with the following characteristics: less than 65 years old, no adverse metastases, IMDC risk score of 0 or 1, and adverse histology (non-clear cell or sarcomatoid features). This was consistent across both the first-line TT and first-line ICI cohorts. 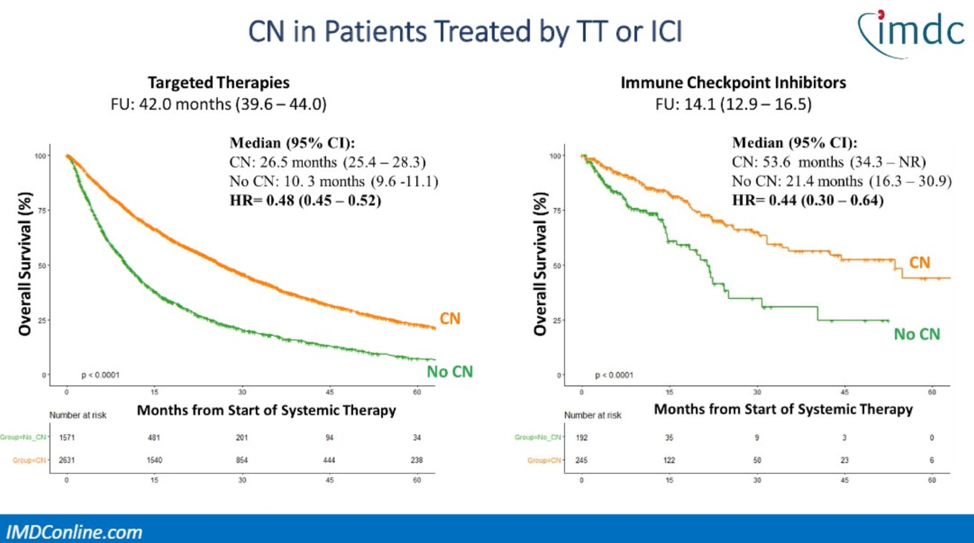 The investigators then performed multivariable analysis to control for baseline differences associated with the likelihood of patients receiving CN and inverse probability of treatment weighting to control for inherent selection bias. Similar to the results observed in univariable analysis, multivariable analysis and propensity score-matched analysis both demonstrated a significant association with improved overall survival in patients who receive either first-line TT or first-line ICI. The interaction p-value in each of these analyses was non-significant, meaning that the amount of benefit for CN did not differ between patients treated with first-line TT versus first-line ICI. 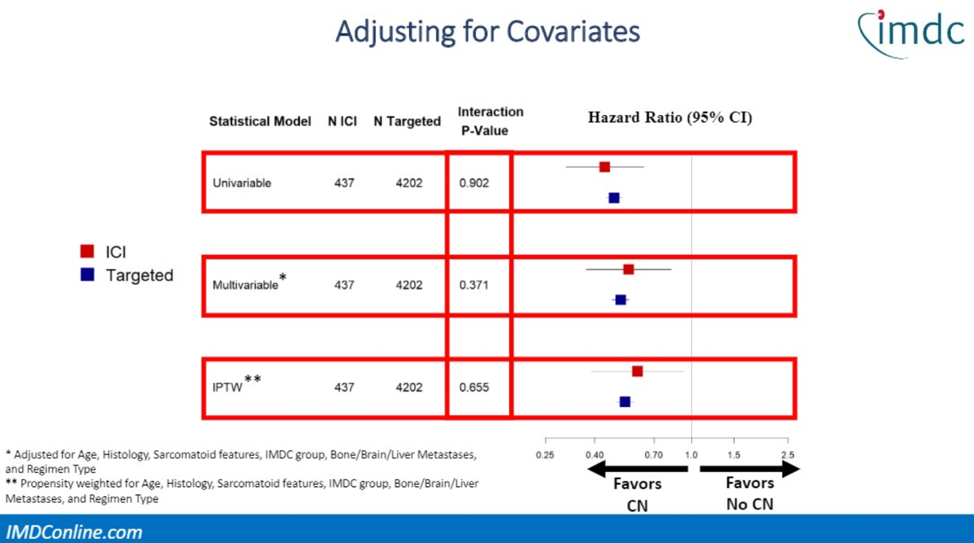 Dr. Bakouny acknowledged that despite their rigorous effort to control for bias, there is still the potential for unmeasured confounders. Additionally, IMDC data is collected from large academic centers and may not reflect patients seen in the community. Nevertheless, data from this propensity-score matched analysis demonstrates a significant overall survival benefit to CN irrespective of first-line treatment. Dr. Bakouny was clear that CN should be considered only for select patients and referred to a recent publication in the ASCO Daily News by Dr. Shaan Dudani that provided recommendations on patient selection for CN. 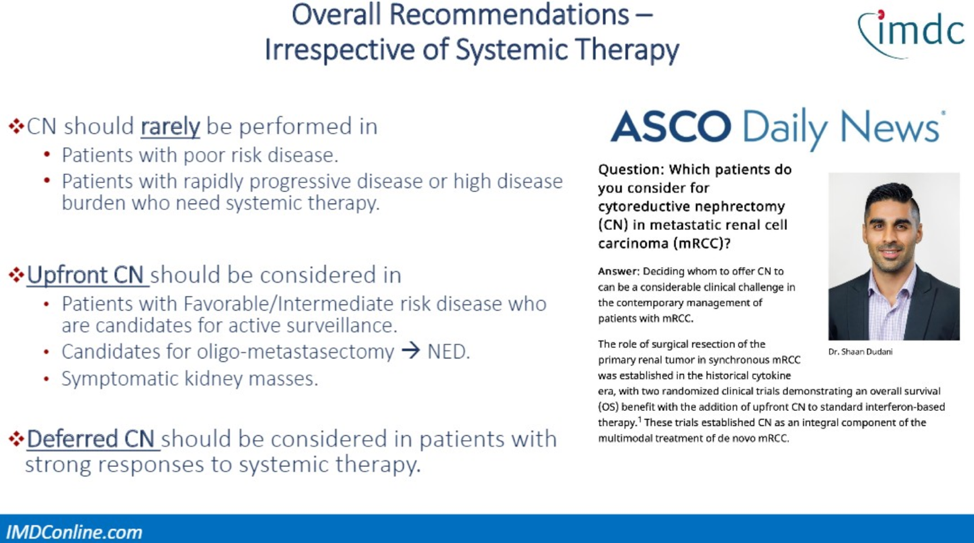 Dr. Bakouny concluded by reiterating the importance of prospective, randomized data in the ICI era and highlighted three clinical trial – NORDIC-SUN (NCT03977571), CYTOSHRINK (NCT04090710), and PROBE (SWOG, under development) – which should help answer the question of which patients in the current era will benefit from CN.