San Francisco, CA (UroToday.com) In a case-based session, Robert Figlin, MD, discussed when it is appropriate to re-challenge with immunotherapy after a patient has developed an immune-related adverse event (irAE).

The hypothetical case Dr. Figlin presented was that of a 65-year man with a new diagnosis of stage IV clear cell renal cell carcinoma (RCC) with metastatic involvement of the lungs. He was seen by medical oncology who started him on axitinib plus pembrolizumab. After 6 months, he had a partial response with shrinkage of the lung nodules, but due to persistent hand-foot syndrome, axitinib was tapered off and he was continued on pembrolizumab alone. 9 months later the patients developed persistent and severe (Grade 3 diarrhea). He was admitted to the hospital and started on IV steroids, which were transitioned to an oral steroid taper. With this management, the diarrhea resolved completely without recurrence. Six months later CT scan demonstrated increased size of the lung nodules consistent with recurrent metastatic disease.

Situations like the one presented in the case above are frequently encountered by medical oncologists, who are then tasked with weighing the risks and benefits of restarting immunotherapy in a patient with a previous irAE. 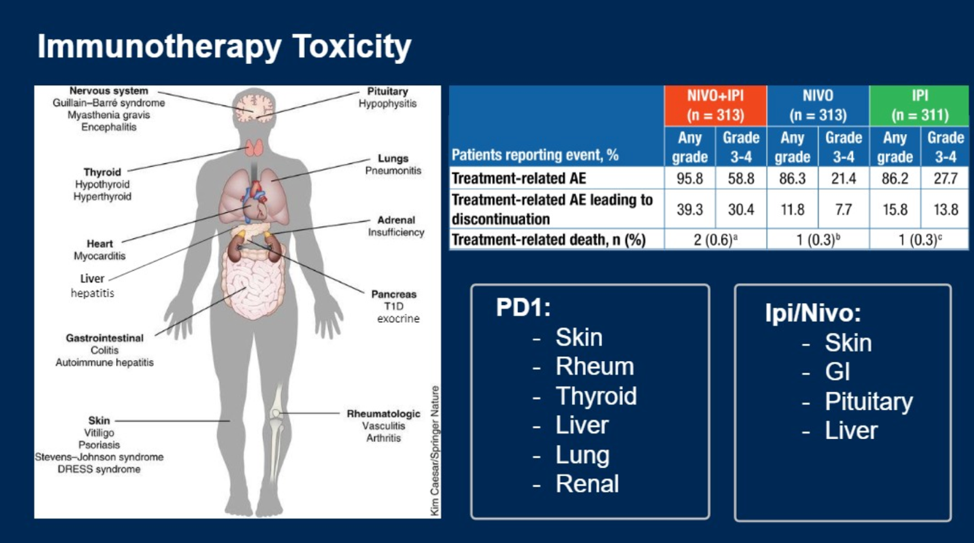 New data sheds light on the outcomes of patients who are re-challenged with an ICI after development of an irAE. In a review of a series of published cohorts of patients who developed irAE and were subsequently rechallenged with an ICI found that 39-55% of patients had recurrent irAEs – approximately half to three-quarters of recurrent events were the same as the initial irAE. This manuscript provided a framework for severity-guided management of irAE and resumption of ICI, stating: “When irAE improves to Grade 1 or lower, consider rechallenging with immunotherapy, particularly if there is evidence of disease stability or response. Consider using single immunotherapy agent if a patient previously received multiple agents. Counsel patient on the risk of recurrent irAE. Monitor closely for irAE recurrence or development of new irAE.”1 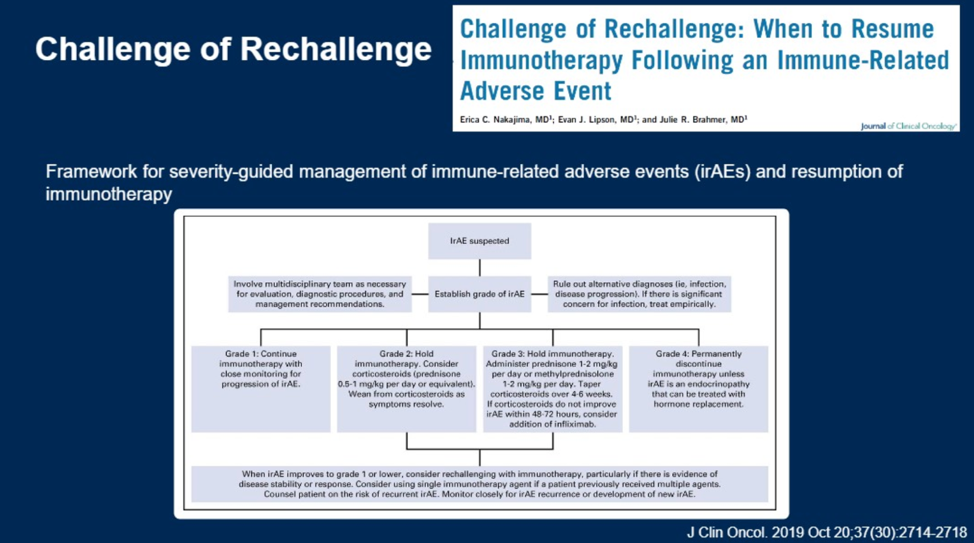