San Francisco, California (UroToday.com) Joshua J Meeks, MD, PhD, Urologist and Assistant Professor at the Northwestern University Feinberg School of Medicine and the Jesse Brown VA Medical Center, presented some of the most influential articles from the past year in the field of bladder cancer research from a urology perspective.

Recent years have seen numerous attempts at transcriptome-based subclassification of muscle-invasive bladder cancer (MIBC). This past year, leaders of the multiple classification attempts convened to produce a consensus molecular classification of MIBC.1 The result was six molecularly defined subtypes, as shown below. Beyond expression profiles, this paper also defined oncogenic drivers, stromal and immune infiltrates, clinical characteristics, and prognostic information for the various subtypes. Dr. Meeks believes that there is now an exciting opportunity to utilize these subtypes to inform clinical trial design. The slides below outline the subtypes and potential subtype-specific therapeutic considerations. 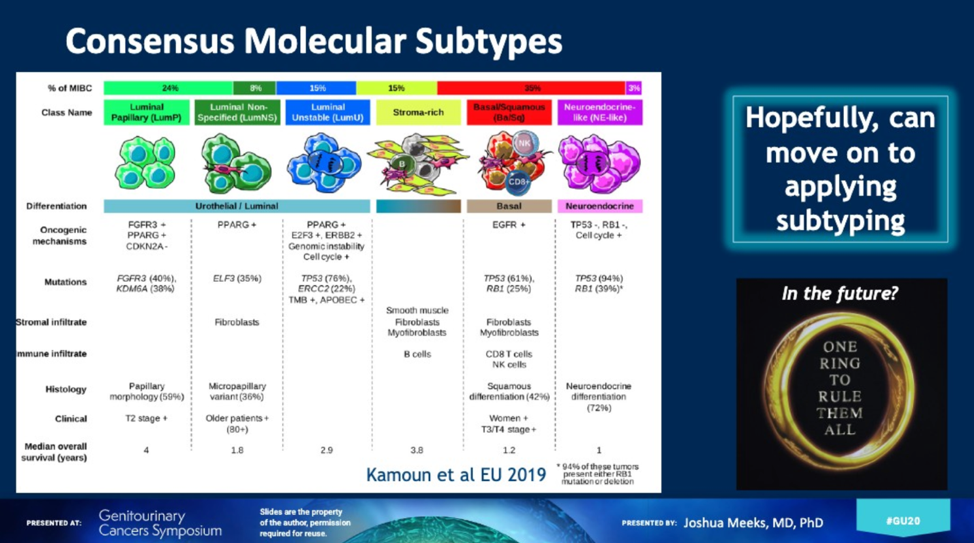 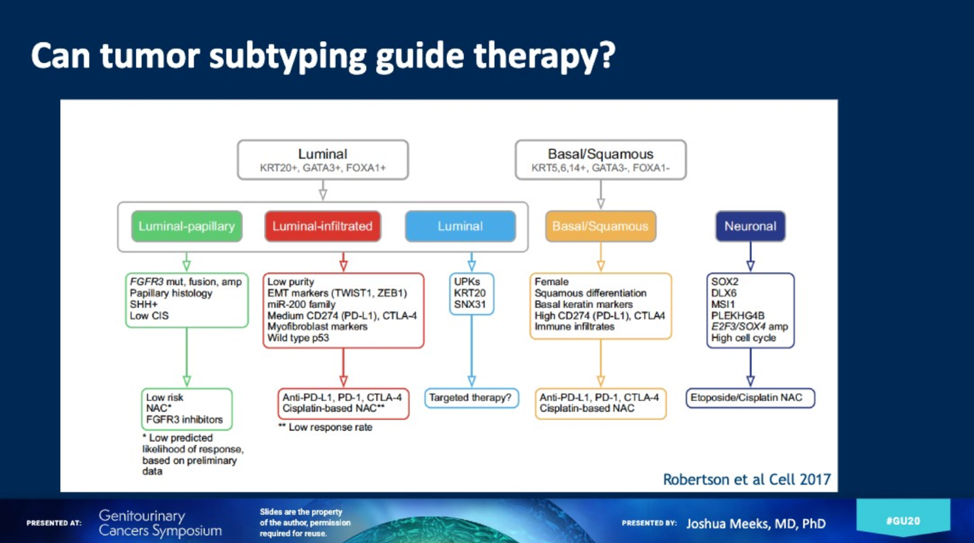 To this end, the second paper discussed sought to address whether molecular subtyping can inform therapeutic decisions; specifically, does luminal MIBC tumors need neoadjuvant therapy prior to radical cystectomy.2 The investigators in this study performed GenomeDx testing on radical cystectomy specimens from 206 patients with MIBC who did not receive neoadjuvant chemotherapy from 7 institutions. Compared to patients with cT1/2 non-luminal subtype, those with cT1/2 luminal subtype had significantly lower rates of upstaging at cystectomy (34% versus 51%; p = 0.02). The significantly lower rates of tumor upstaging in luminal than non-luminal persisted in multivariate analysis. Patients with luminal disease also had significantly lower rates of cause-specific mortality. Dr. Meeks cautioned that this data cannot be used to suggest that patients with luminal subtype do not need neoadjuvant chemotherapy. This data is retrospective, not validated, and notably, rates of node positivity were similar between luminal and non-luminal subtypes (21% versus 26%; p = 0.4).

The next study evaluated genomic differences between “primary” MIBC and “secondary” MIBC (disease that began as non-MIBC and recurred with MIBC).3 Compared to primary MIBC, secondary MIBC had lower rates of ERCC2, TP53, and RB1 alterations, and higher rates of CDKN2A and FGFR3 alterations. Clinically, secondary MIBC had worse relapse-free survival, cause-specific survival, and response to neoadjuvant chemotherapy. Whether a better understanding of the genomics of secondary MIBC can be exploited to improve outcomes remains to be seen. 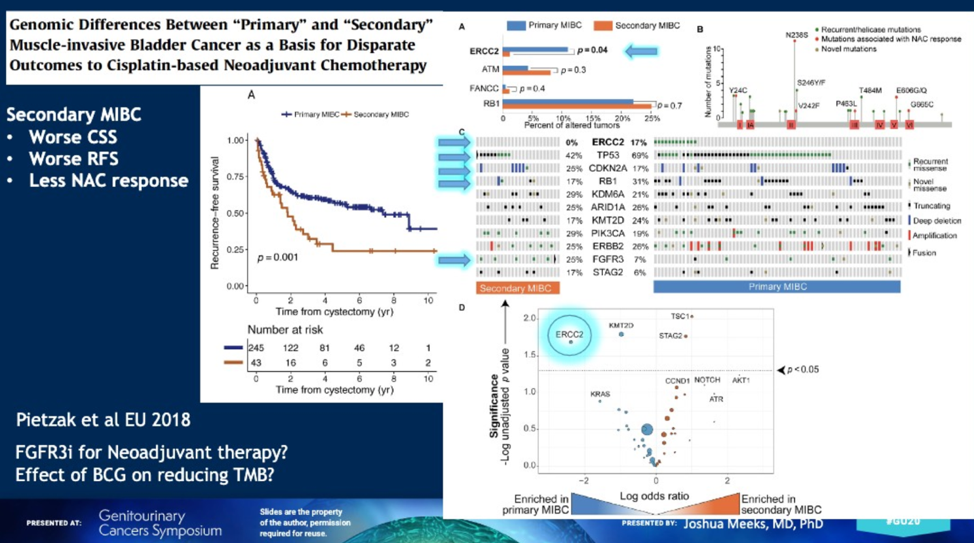 The next article discussed a multi-institution study of sequential gemcitabine and docetaxel as rescue therapy of non-muscle invasive bladder cancer. The cohort included 273 patients at 7 institutions; median number of prior BCG inductions was 2; 60% were cystectomy candidates; stage distribution was 39% CIS, 13% TaLG, 26% TaHG, 21% T1, Any CIS 63%. Recurrence-free survival was 46% at 2 years. Dr. Meeks put this into context of recent published data of pembrolizumab in BCG unresponsive patients, which reported a complete response rate of 40% at 3 months. An ongoing trial (NCT04164082) is combining these approaches testing concomitant intravesicular gemcitabine with IV pembrolizumab in BCG unresponsive patients.

An unanswered question in the urologic management of MIBC is whether extended pelvic lymph node dissection (ePLND)is superior to limited pelvic lymph node dissection (PLND). Investigators evaluated this question in a prospective, randomized trial of 401 patients, testing the hypothesis that ePLND would have a 5-year relapse-free survival of 65% compared to 50% for limited PLND.4 The two arms were well balanced for clinical and pathologic characteristics, including nodal status and margins; rates of adjuvant chemotherapy were also similar. At 5 years, the relapse-free survival was 59% in the limited PLND arm and 64% in the ePLND arm, which did not meet the threshold for significance. Additionally, there was a significantly higher rate of lymphoceles in the ePLND arm (8.6% versus 3.4%; p = 0.04). Although this study did not support superior outcomes for ePLND compared to limited PLND, a large study (SWOG S-1011) is ongoing, which will further inform this question.

The final paper explored the genomic landscape of upper tract urothelial carcinoma (UTUC) in 37 patients from two institutions.5 The most frequent alterations were KMT2D and TP53, which occurred at similar rates as observed in bladder cancer. The third most commonly altered gene in UTUC was FGFR3, which occurred at significantly higher rates than bladder cancer (30% versus 13%). Although UTUC are associated with Lynch Syndrome, mismatch repair genes were observed to be down-regulated, and the most dominant mutation signature was APOBEC, not mismatch repair deficiency. Expression profiling demonstrated that UTUC is mostly luminal subtype, has a “cold” tumor microenvironment.