Since 1989, when Dr. Sternberg published on the phase II trial on MVAC that led to a new standard of care through 2013, new treatment options were limited to variations in platinum and taxane-based chemotherapies1. What has followed since 2013 has included five new immunotherapeutic agents, including targeting of PD1/PDL1, and most recently, the FDA approval of enforumab vedotin, an antibody drug conjugate (ADC) against Nectin-4.2 Additionally, UC entered the targeted therapy arena with erdafitinib in patients with select FGFR genomic alterations.3 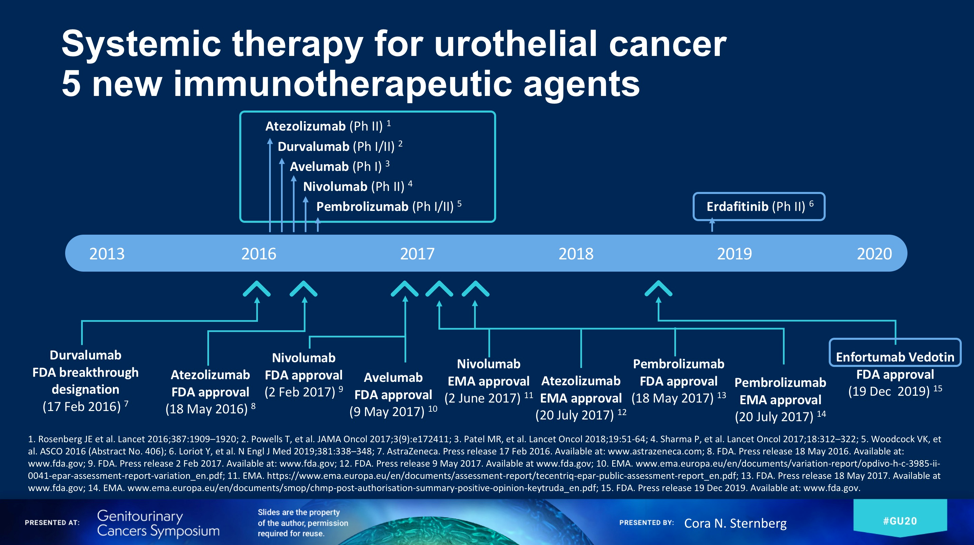 Concomitant with the development of these agents has been a remarkable advancement in the genomic and molecular classification of UCs, which assists in the selection of agent, with highlighting luminal and basal subtypes for ICI and luminal papillary for FGFR inhibitors. Dr. Sternberg highlighted the observation of high rates of tumor mutational burden (TMB) in urothelial carcinoma, on par with lung cancers and melanoma.4 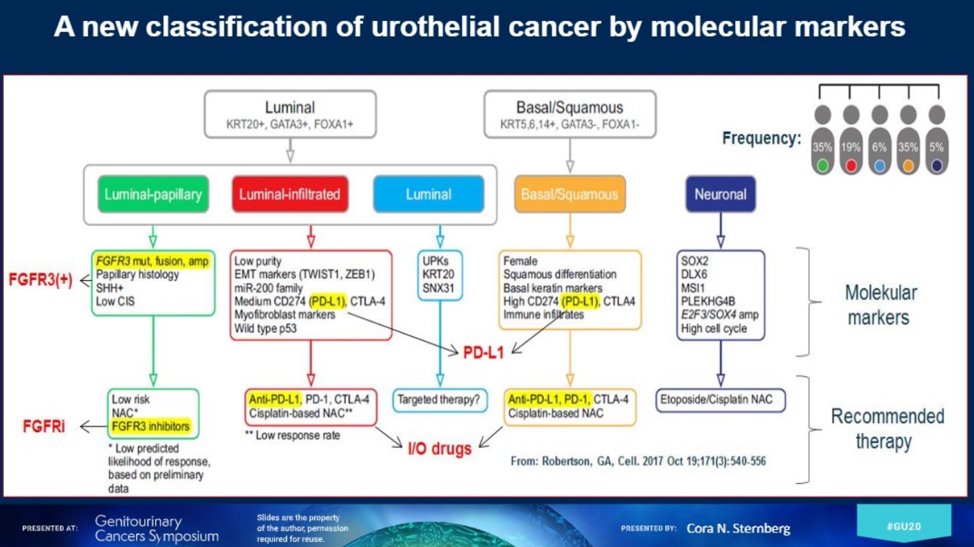 Within the immunotherapy space, results were summarized from trials including atezolizumab, nivolumab, pembrolizumab, avelumab, and durvalumab, with ORR ranging from 13-26%, each demonstrating that those patients responding had reasonably durable responses. Dr. Sternberg cautions that no head-to-head studies have been conducted for immune checkpoint inhibitors in platinum-refractory UC, and direct comparisons between agents cannot be confidently made. Variations in the assay used to qualifying or evaluate PD-L1 status provide some uncertainty for the role of PD-L1 status.  In IMvigor 210, response to atezolizumab post-platinum was enhanced by higher PD-L1 status (via SP142 IHC), although those without any staining had a median OS of 6.5 months in the single-arm study, arguing that PD-L1 status may be reconsidered as qualifying a patient for treatment.  Furthermore, the KEYNOTE-045 displayed a 27% reduction of risk of death irrespective of CPS scores in subgroup analysis, with the caveat of somewhat small groups.

In the first line, cisplatin-ineligble setting both atezolizumab and pembrolizumab are approved with similar ORR (23% and 29%, respectively), and, notably, apparent increased response in those with CPS ≥10, implying a difference in response to ICI in cisplatin-exposed and unexposed patients that remains understood. 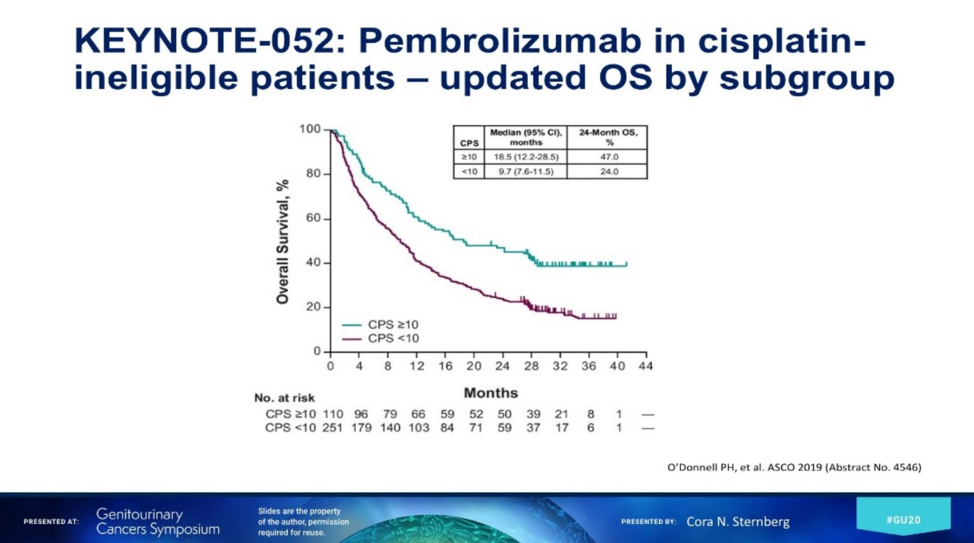 As a real-world application of ICI, Dr. Sternberg reviewed results of the SAUL trial, which allowed patients often excluded from ICI studies, but frequently experienced in actual clinical practice.  Namely, patients with antedecent autoimmune disease, HIV positivity, and renal impairment responded similarly as the overall population to treatment with atezolizumab.  Patients with ECOG PS of 2 and with antecedent CNS disease fared worse. Upper tract UC, often considered to less ICI-responsive, comprised 23% of the patient population and had OS on par with bladder, renal pelvis, and ureter subgroups. 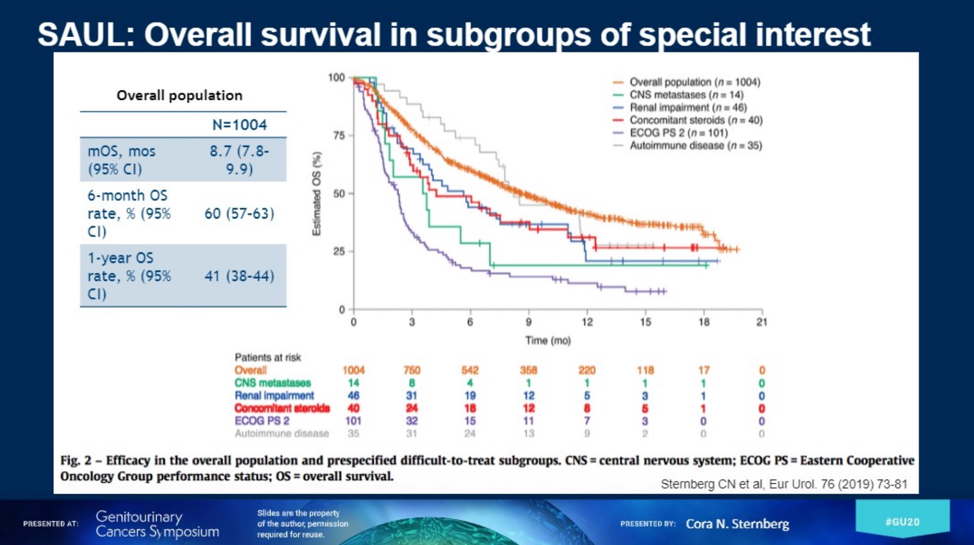 Dr. Sternberg also surveyed other tumor metrics that may predict the possible susceptibility to immune checkpoint blockade.  Within IMvigor tumors from all TCGA subtypes responded, but there was enhanced response in Luminal II tumors, however, within Checkmate275 with nivolumab, basal/squamous may respond best.  Thus, perhaps more reliable than PD-L1 IHC or subtyping, tumor mutational burden (TMB) is a candidate for predicting response.  To wit, response was higher, by median, in responders versus non-responders to atezolizumab (IMvigor210) in the platinum-refractory setting5.  Compromised DNA damage response mechanism also appears to increase the likelihood of ICI response, where an 80% ORR was seen in subjects with deleterious DDR.6 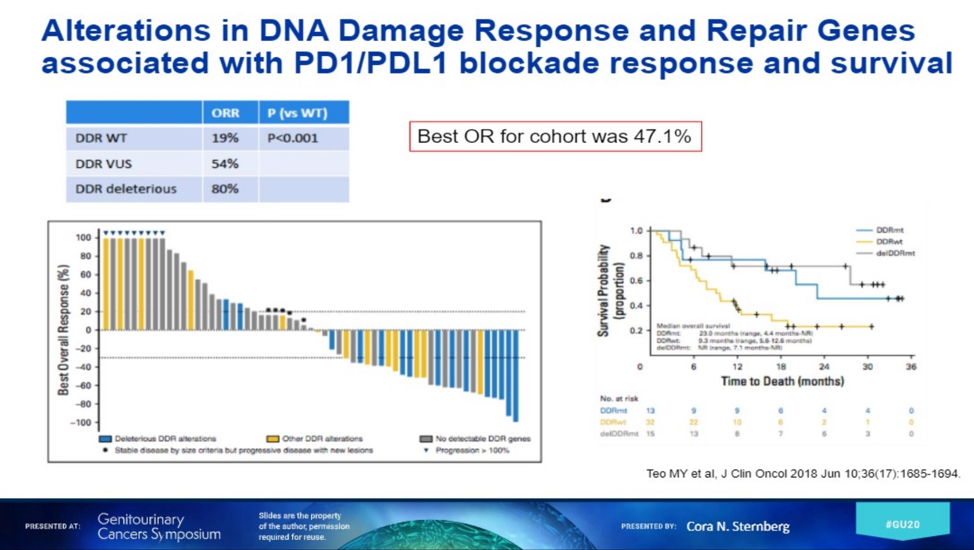 Two promising ADC were also discussed. Enfortumab vedotin has shown in EV-201 single agent efficacy in platinum-refractory, anti-PD-1/L1-exposed patients with ORR of 44%, with 12% CRs2. In the first line, for platinum-inelgible patients, enfortumab vedotin afforded a 73% ORR in combination with pembrolizumab7. The adverse event of peripheral neuropathy was highlighted among AEs.  Sacituzumab govitecan (SG), an ADC targeting Trop-2 which is highly expressed in a variety of epithelium-derived tumor types to deliver cytotoxic SN-38.  The hydrolyzability of the linker region promises to allow additional delivery of the “payload” to the tumor microenvironment.  The subjects with advanced UC (n = 45) within the basket trial (phase I/II) of SG experienced OR of 31% (2 CRs), mPFS of 7.3 months, and mOS of 16.3 months8. 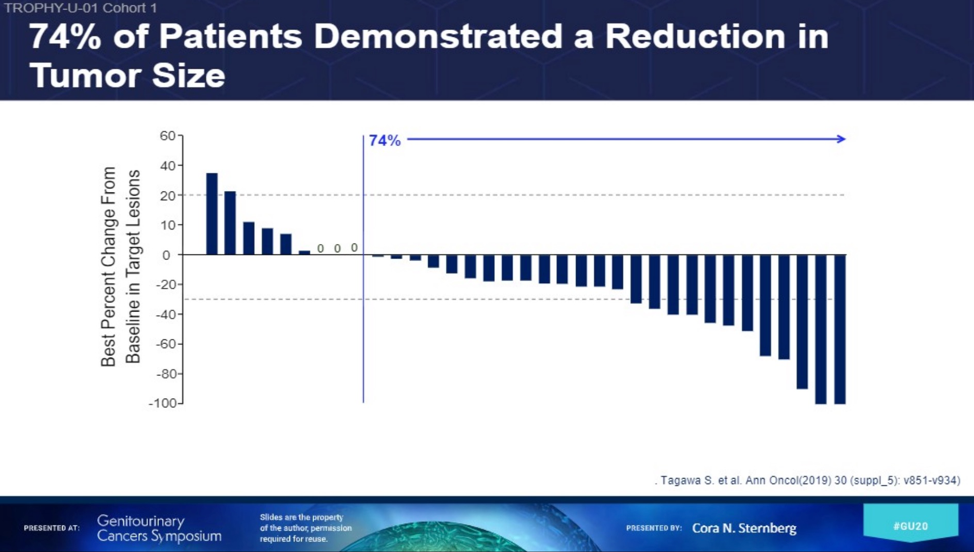 Erdafitinib is an oral small molecule inhibitor of the Fibroblast Growth Factor Receptor (FGFR) family of receptor tyrosine kinases, relevant in UC given presence of FGFR3 mutations and fusions in urothelial carcinoma. Erdafitinib was approved in 2019 by virtue of a confirmed response rate of 40% in an open-label, single-armed phase II BLC2001 trial in molecularly selected tumors3. Dr. Sternberg highlights the pharmacokinetic hyperphosphatemia that occurs and can be used for dose titration.  Post hoc, it was seen that patients with prior ICI exposure were more likely to respond to erdafitinib, and perhaps even more so if they did not respond to ICI.  This was briefly believed to influence treatment selection until a retrospective review of CheckMate 275 and IMvigor 210 revealed no clear influence of FGFR alterations on likelihood of response to ICI9. 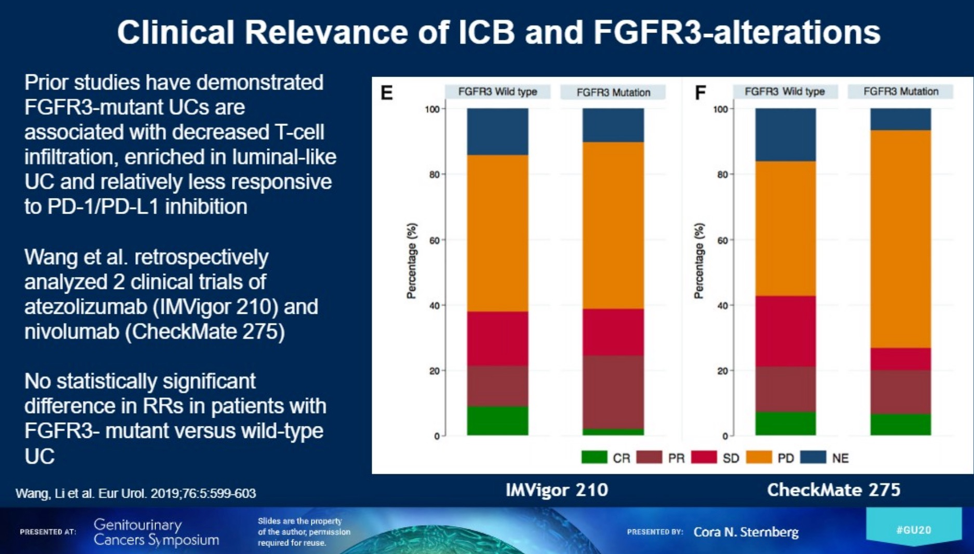 Relatedly, data was reviewed suggesting that FGFR3-mutant UCs have fewer infiltrative T-cells, leading to the rationale design of combination studies. One such study is the FORT-2 study, a phase 1b/II combination study of first line FGFR inhibitor fogaratinib and atezolizumab combination in cisplatin-ineligble locally advanced or metastatic UC patients.10 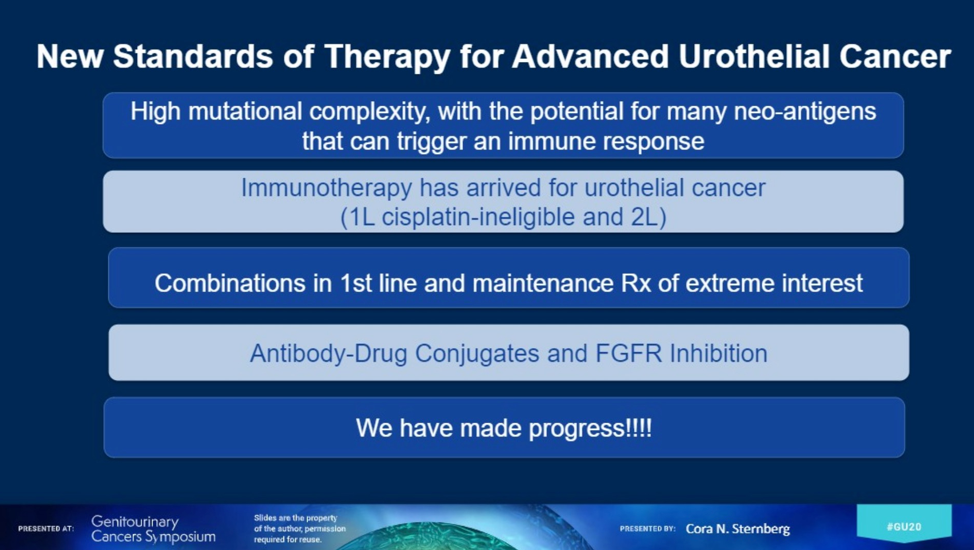 Dr. Sternberg concluded her expansive talk with lauding the remarkable progress in recent years and emphasizing these points:

It is clear that the complicated decision-making and selection of therapy reflects rapidly advancing understanding of the tumor biology and the sudden increase in options available.