San Francisco, CA (UroToday.com) Standard of care therapy for men with biochemical recurrence of radical prostatectomy is salvage external beam radiotherapy (EBRT) followed by androgen deprivation therapy (ADT)1. Unfortunately, 51% of men may have PSA recurrence at 2 years, even after salvage EBRT and docetaxel based chemotherapy2. This phase II study evaluates the addition of enzalutamide to standard of care EBRT + ADT.

Patients with PSA relapse within 4 years of radical prostatectomy with a Gleason of 7-10 and PSA between 0.2 and 4.0 and rising were included. Patients must have had no metastases by standard CT/bone scan and node positive men were eligible if they had less than 3 prior positive nodes which had been resected. All patients were given enzalutamide at the standard dose of 160 mg/day as well as ADT for 2 months, which was then followed by EBRT (64.8-68 Gy) for 6-8 weeks. ADT and enzalutamide were continued during this period of time for a total of 4 additional months for a total of 6 months of ADT and enzalutamide. The primary objective was to determine the 2 year progression free survival of men who have had testosterone recovery to >100. 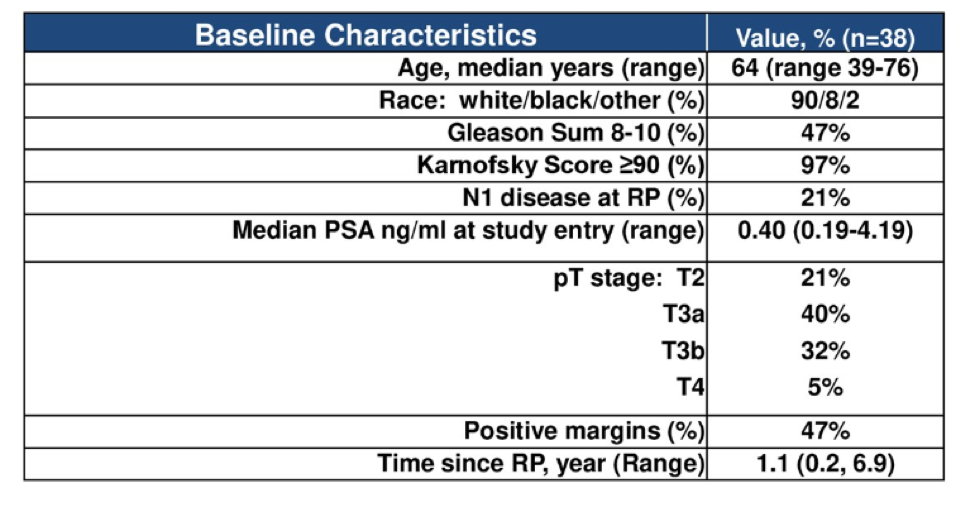 After a median follow up of 29.5 months, the median progression free survival for patients with testosterone recovery was 64.9%. 69% of patients in the entire cohort continue to have undetectable PSA at 2 years. 8 patients had node positive disease at prostatectomy and the 24 month and 36 month progression free survival was 25%. Testosterone recovery occurred in 95% of patients.

In terms of quality of life, a significant number of patients experienced short term reductions in quality of life with respect to urinary irritative score, urinary incontinence score, bowel score, sexual score, and hormonal score. However, most men experience recovery by 12-24 months.

Salvage therapy with combination ADT plus enzalutamide for 6 months with salvage EBRT is safe with encouraging efficacy data in this small phase II study of men with PSA recurrent prostate cancer after radical prostatectomy. Quality of life initially diminishes with treatment but most patients recover within 12 to 24 months. This study’s primary endpoint of PFS at 2 years was 65% which compares favorably to historical controls and warrants further study in a randomized phase III clinical trial for this high risk population of patients where treatment is with curative intent.