There is an increasing need for biomarkers in advanced prostate cancer management – as there is a plethora of treatment options without much guidance about selection or sequencing. Some of the areas that require work are:
She then touched upon the fact that metastatic biopsies are increasingly being utilized (either biopsy of the met directly or liquid biopsies) to look for actionable targets OR to identify treatment resistance. 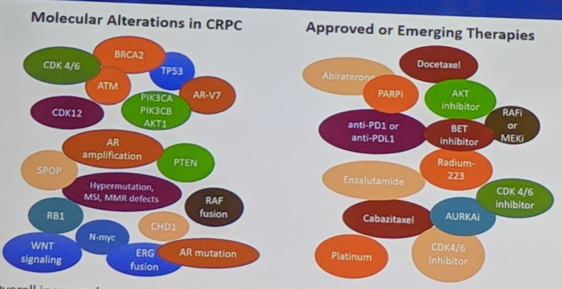 The technique of assessing these matters – and will be discussed more by Mark Rubin in his talk to follow.

She then addressed tumor evolutionary biology and theories of clonal evolution to underscore the difficulties with treating metastatic disease. There are two possible clonal pathways:

Next, she addressed the role of biomarkers to identify treatment resistance.

The androgen receptor (AR) is still the main driver of CRPC in the majority of patients – there is a small subset of patients who are androgen-independent.

Yet, despite it still being the major driving, all our current AR-targeted therapies eventually fail. So, what is the clinical significance of this?

How do we better target the AR? Do we hit it harder? Combine therapies? Or switch to taxanes?

Some of her suggested strategies are as follows:

On the flip-side, is there a way to better identify non-AR driven tumors early on? Are there tumors that are more resistant to AR pathway inhibition?

In this slide, she highlights the current biomarker needs for advanced prostate cancer – and notates those currently being assessed in red:

Unfortunately, at this time, multiple barriers still exist to the effective use of biomarkers in patients with advanced prostate cancer – including patient, disease, assay and drug factors. Collaborative efforts will be required to help overcome these barriers.

Her take-home slide is very thorough:

The future will likely be a combination of patient and molecular features to define subgroups of patients for tailored treatment approaches.