San Francisco, CA (UroToday.com)  Patients with advanced urothelial carcinoma who progress on platinum-based chemotherapy generally have a poor prognosis and limited treatment options. Immunotherapy has recently moved into both the first and second line space1. However, the majority of patients do not respond to immune checkpoint inhibition. For example, in KEYNOTE-045, only 21% of patients had an objective response with pembrolizumab. The objective response rates for chemotherapy remain low – in that same study where the control group received investigators choice of chemotherapy which included paclitaxel, docetaxel, or vinflunine, the ORR was only 11.4%. Thus, there is an unmet need for additional therapies for patients who have progressed on platinum-based chemotherapy.

Ibrutinib is an irreversible inhibitor of BTK (Bruton’s tyrosine kinase), a critical component of the B-cell receptor and cytokine receptor pathway. Ibrutinib is currently used in the liquid malignancy space, for the treatment of chronic lymphocytic leukemia/small lymphocytic lymphoma (CLL/SLL), chronic graft-versus-host disease, mantle cell lymphoma, marginal zone lymphoma, and Waldenström macroglobulinemia. It has been hypothesized that ibrutinib may be efficacious in solid tumors as well through an upregulation of anti-tumor immune response by inhibiting ITK, thereby shifting the balance between Th1 and Th2 cells. 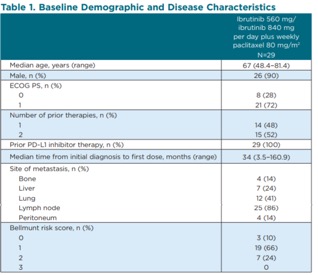 In terms of safety, the most frequent adverse events were diarrhea (79%), decreased appetite (55%), asthenia (45%), and fatigue (41%). Ibrutinib has anti-platelet activity and hematuria (24%) and epistaxis (21%) were observed and one patient had major hemorrhage. 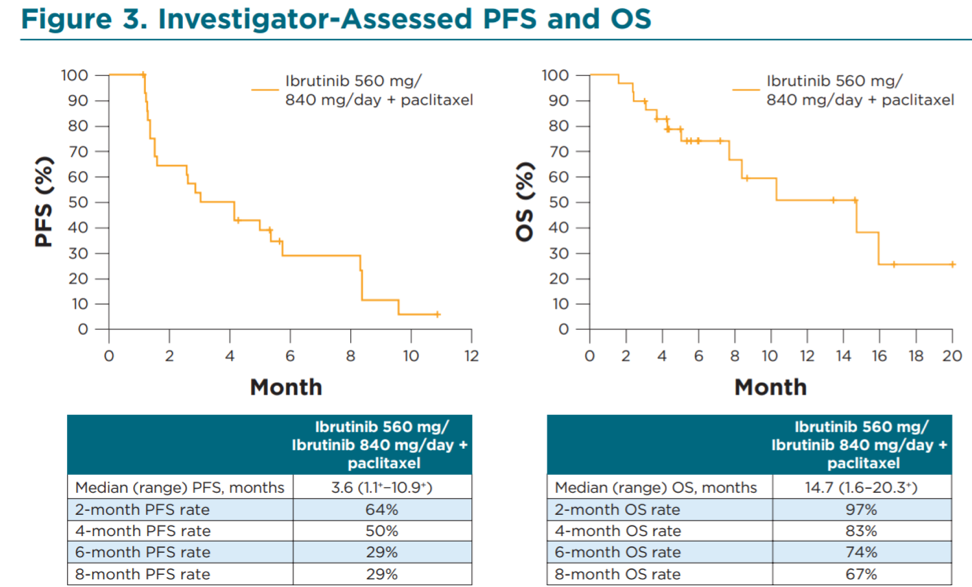 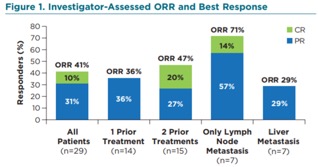 In the post immunotherapy setting, there are limited options for patients with metastatic urothelial carcinoma. In this study where 100% of patients had progressed on a checkpoint inhibitor, the combination of ibrutinib plus paclitaxel provided an impressive objective response rate of 41%. Unfortunately, the response was not durable as the majority of patients had progressed 3.6 months. Given the immunomodulatory effects of ibrutinib, perhaps adding on a checkpoint inhibitor may provide for a more durable response. Phase II studies in CLL are evaluating this strategy with ibrutinib plus nivolumab2.