This study retrospectively identified men with testicular or mediastinal germ cell tumors who underwent matched tumor-germline sequencing of ≥ 310 genes as part of an institutional genomic profiling initiative from April 2015 to December 2020. The presence of germline variants in clinically actionable genes (>76) associated with hereditary cancer syndromes was analyzed. Clinicopathologic characteristics, including primary site, histology, and family history were assessed by the presence of pathogenic or likely pathogenic variants and compared using Fisher’s exact test. A summary of the methods is as follows:

The study included 477 men, 69 (15%) with mediastinal-germ cell tumor and 408 (85%) with testicular-germ cell tumors. The median age of diagnosis was 30 years (interquartile range 24 – 39). A total of 81% had non-seminoma, 5% had localized disease, 46%, 14%, and 34% had good, intermediate, and poor risk advanced disease, respectively, and 6% had family history of germ cell tumors. The baseline characteristics are as follows: 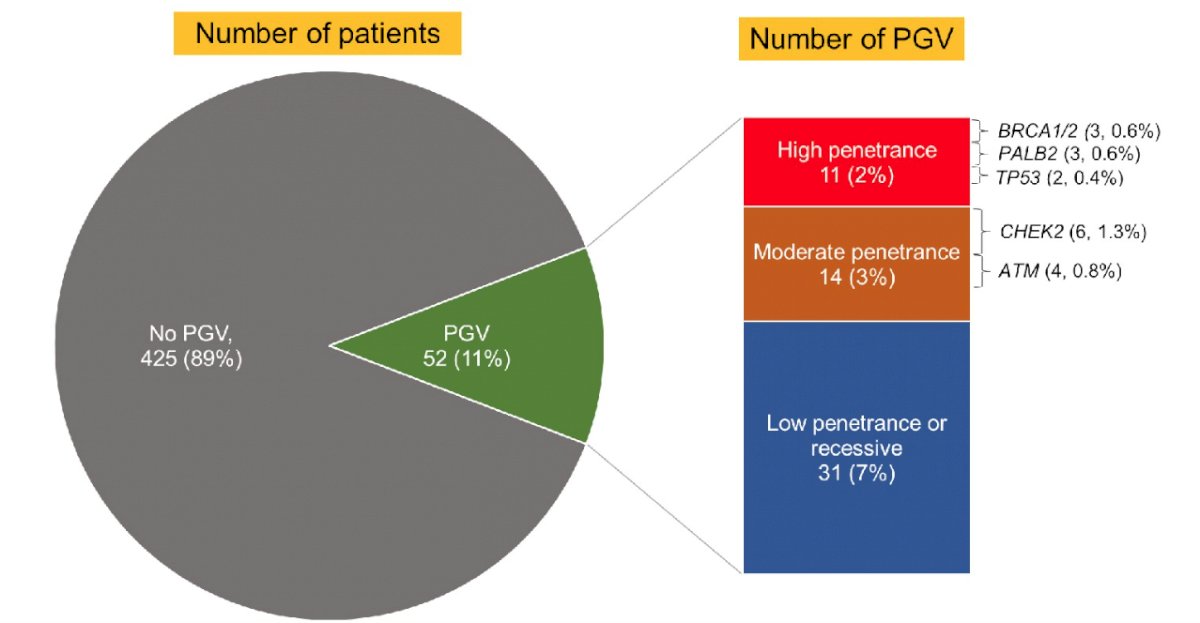 Based on these (and others) results, there may be implications of positive germline testing results for patients with TP53, CHEK2, ATM, PALB2, and BRCA1/2 mutations, as highlighted in the following table:

The strengths of the current study are that (i) there was well-annotated clinical information, including personal and family history, available, (ii) it is the largest unselected cohort of mediastinal germ cell tumor patients with germline sequencing, and (iii) there was matched tumor and normal sequencing available. The limitations of this study are that (i) it was a single institutional cohort, and (ii) it may not reflect the general population of patients with germ cell tumors, given that more patients had advanced disease, and there was a high proportion of patients with Ashkenazi Jewish ancestry (9/56, 16%, pathogenic germline variants were founder mutations).

Dr. Truong concluded this presentation by discussing germline genetics of germ cell tumors, and implications for genetic testing and clinical management with the following summary points: