(UroToday.com) Thus far the revolution of immune checkpoint inhibitors (ICI) has largely passed by prostate cancer. Despite the past success of autologous cellular therapy (Sipuleucel-T), immunotherapy has had limited efficacy in prostate cancer. Advancing the use of immune-based therapies for prostate cancer is an actively pursued goal and a space in which successful use of ICI would be a breakthrough.

Dr. Matthew Dallos, on behalf of his co-investigators, presented data from the randomized phase Ib/II study of intermittent androgen deprivation therapy (ADT) plus nivolumab with or without interleukin-8 blockade in men with hormone-sensitive prostate cancer (MAGIC-8). As described by Dr. Dallos, it is known that ADT results in immunomodulation, with initial development of a complex immune infiltrate in the tumor prior to the development of castration resistance. ADT, however, increases IL-8 which promotes the presence of immunosuppressive myeloid cells. This explains, in part, the rationale for intermittent ADT, which also was an appealing option for patients to potentially spare exposure to ADT. The authors attempted to capitalize on the initial immune infiltrate following ADT introduction by simultaneously preventing the suppressive immune phenotype mentioned. Their hypothesis was that treatment with anti-PD-1 (nivolumab) +/- anti-IL-8 (BMS-986253) given at the time of castration could induce anti-tumor immune responses and decrease disease progression. 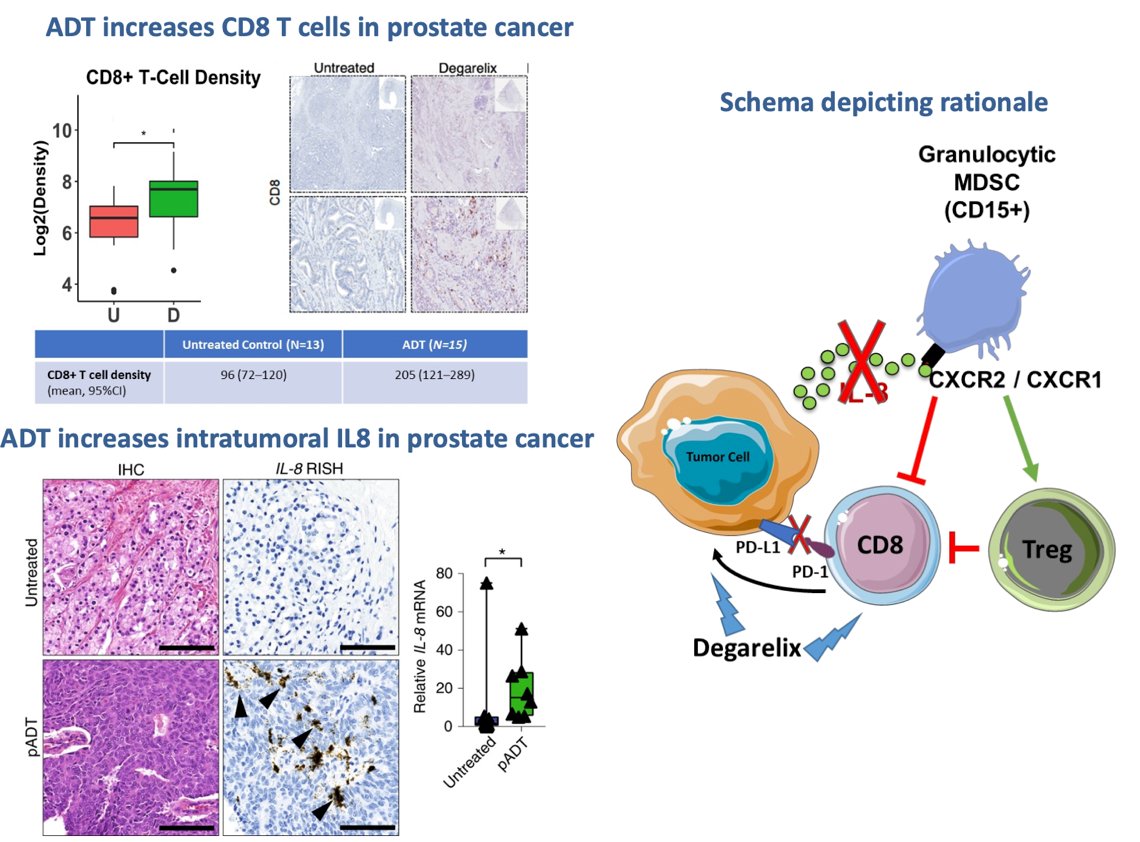 The study schema was clearly illustrated, as shown below. Eligible patients were recurrent castration sensitive prostate cancer (testosterone ≥200 ng/dL) with rising PSA and rapid PSA doubling time (≤12 months). In the phase Ib portion, patients were treated nivolumab (480 mg every 4 weeks) for 8 weeks, followed by continuation of nivolumab for an additional 16 weeks with the addition of degarelix. In the phase II, patients were randomized 1:2 to receive either nivolumab and degarelix (Arm A) or nivolumab, degarelix, and BMS-986253 (2400 mg every 2 weeks)(Arm B). 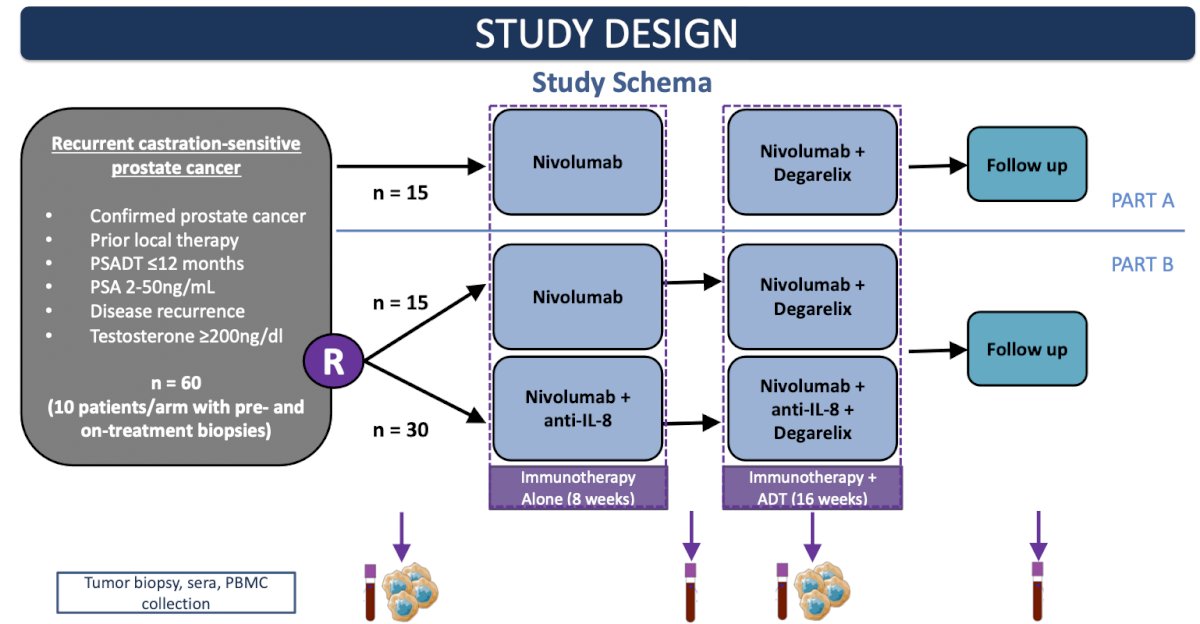 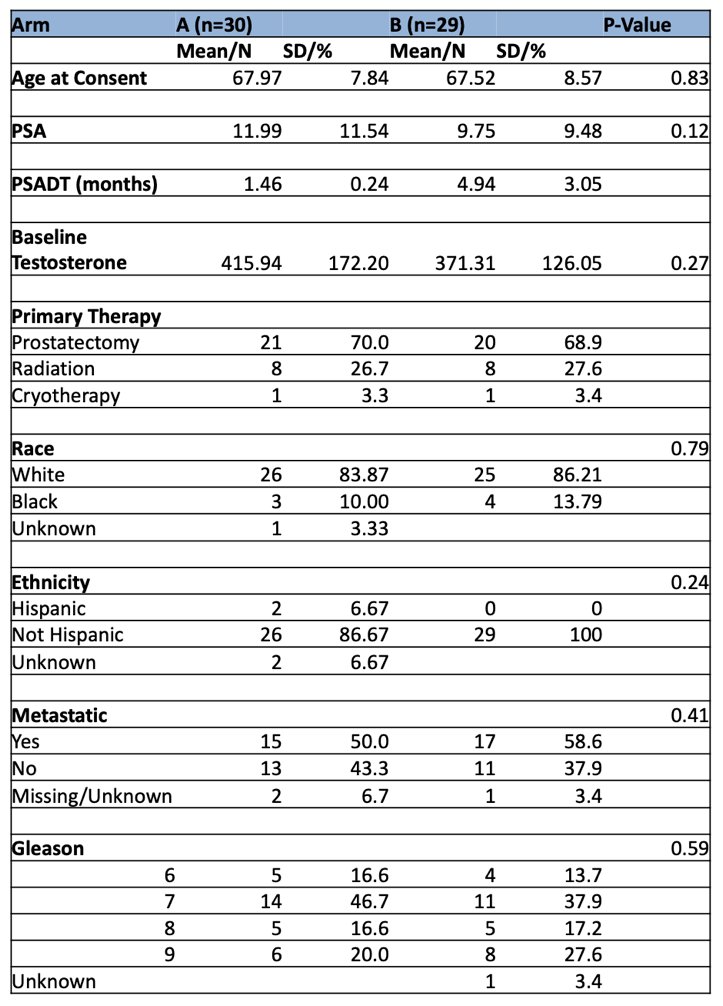 Patients treated with the Arm A regimen (n = 30, total between Ib and II) displayed a 17.39% rate of PSA relapse at 10 months, which the authors compared favorably to historical control of 50% (p<0.001). Among these patients, a group (6.67%) had recovered their testosterone levels without PSA relapse at >2 years of follow up. Median time-to-recovery of testosterone was 12.7 months. Median biochemical PFS was 14.0 months with the median bPFS following testosterone recovery was 5.5 months.

In contrast, to Arm A, rate of PSA relapse at 10 months was 35%, which was not statistically lower than the historical landmark (p=0.09). No differences were observed in median time-to-recovery of testosterone, median bPFS, or median bPFS after recovery of testosterone compared to historical controls. Treatment in both arms was well tolerated with a lower rate of grade 3-4 treatment-related adverse events in Arm B compared to Arm A (3.5% vs 12.9%).

Measurement of free IL-8 levels in circulation demonstrate the anticipated effect of anti-IL-8 treatment, with a reduction of IL-8 in circulation after treatment with nivolumab with or without ADT. Elevation of TNFα in the anti-IL8 patients was also observed, which the authors speculate could be a harbinger of adaptive resistance to this regimen.

The authors conclude that the addition of nivolumab in at the time of initiation of ADT may allow a limited course of ADT in CSPC and still decrease the rate of PSA relapse. They also highlight an intriguing subset of patients with durable responses despite testosterone recovery. Finally, the authors data indicated that the addition of anti-IL8 may decrease adverse events could increase the appetite of patients for adding a potentially toxic therapy.