(UroToday.com) The 2022 ASCO annual meeting featured an oral abstract session on prostate cancer, including a Prostate Cancer Foundation (PCF.org) and Prostate Cancer UK sponsored presentation by Dr. Susan Halabi discussing intermediate clinical endpoints as potential surrogates for overall survival in men with mHSPC. Overall survival (OS) is the gold standard endpoint in oncology trials, however clinical trials in mHSPC with OS as a primary endpoint take close to a decade to read out. Surrogate endpoints are proposed based on biological pathways, available earlier in the course of the cancer’s natural history, and measured more frequently than the true endpoint (OS). Dr. Halabi and colleagues hypothesized that radiographic progression-free survival (rPFS) and clinical PFS (cPFS) are valid surrogates for OS in men with mHSPC and could potentially be used to expedite phase 3 clinical trials. This hypothesis was investigated by the STOPCAP M1 Collaboration.

Dr. Halabi and colleagues obtained individual patient data from eligible randomized trials comparing treatment regimens (ADT or ADT + docetaxel in the control or research arms) in mHSPC. For this study, the true end point was OS (the date of randomization to date of death from any cause), and intermediate clinical endpoints (rPFS and cPFS) were defined as follows: rPFS was defined as time from randomization to radiographic progression (defined per protocol) or death from any cause, whichever occurred first; cPFS was defined as time from randomization to date of radiographic progression, symptoms, initiation of new treatment, or death, whichever occurred first.

Dr. Halabi implemented a two-stage meta-analytic validation model where conditions of trial level and patient level surrogacy had to be met:

They then computed the surrogate threshold effect, which is the minimum intermediate clinical endpoint treatment effect necessary to estimate a non-zero effect on OS. With regards to data analysis, the following were noted for each condition:

Individual patient data from 8,592 patients randomized from 1994-2012 from 9 trials (13 comparisons) were pooled for a stratified analysis. The characteristics of the 9 trials is as follows: 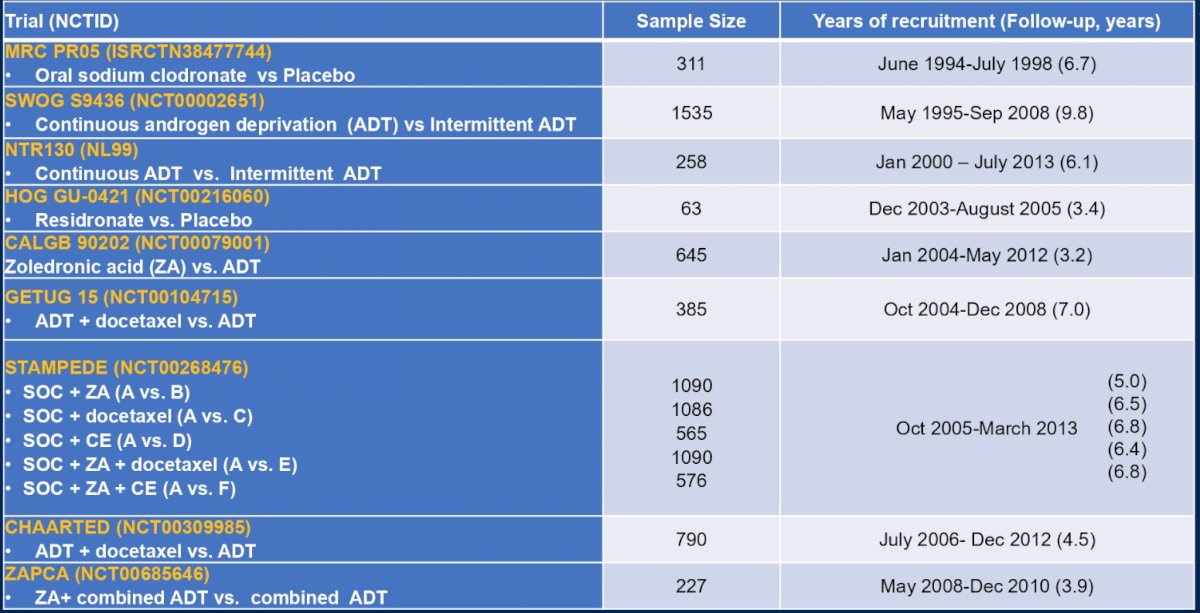 The strengths of the current study were (i) the large number of patients (>8,500 patients) and number of trials (9), which included 5 comparisons from STAMPEDE, (ii) used individual patient level data, allowing an estimate of the association between surrogate and true endpoints, estimate parameters with greater precision, and conduct subgroup analyses, and (iii) intermediate clinical endpoints (rPFS, cPFS) were harmonized across trials and used a protocol definition. One limitation is that disease volume and timing of M1 were not collected prior to the CHAARTED trial.