Theranostic treatment using LuPSMA has rapidly gained interest in both research and clinical practice spheres. The principle of theranostic approaches rely on targeted delivery of treatment directly to cancer cells: in the case of 177Lu-PSMA-617 (LuPSMA), the beta-emitter lutetium is targeted to prostate cancer cells using antibodies to the transmembrane protein PSMA (prostate specific membrane antigen). 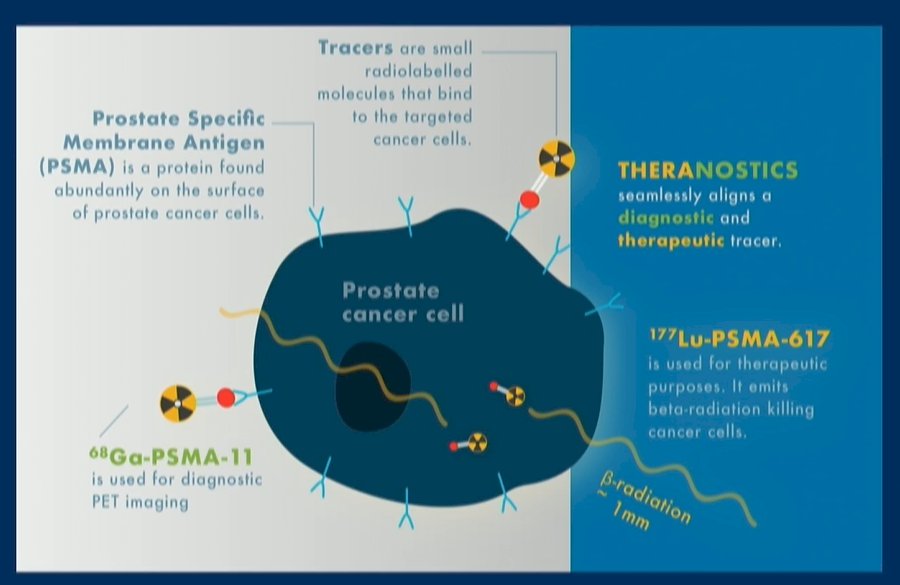 TheraP (NCT03392428) was the first randomized trial of this treatment approach showing that, in men with mCRPC who had disease progression after docetaxel, those randomly assigned to LuPSMA has significant improvements in PSA response rate (66% vs. 37%), RECIST response rate (49% vs. 24%), progression-free survival (HR 0.63), less grade 3 or 4 toxicities (33% vs. 53%) and better patient-reported outcomes, compared to those who received cabazitaxel.

At this year’s ASCO meeting, Dr. Hofamn provided results regarding the secondary endpoint of overall survival (OS) with mature follow-up, as well as data on those patients initially excluded because of low PSMA-expression or discordant disease on imaging with PSMA-PET and FDG-PET.

The design of the TheraP trial has previously been described and published. In short, the authors accrued men with mCRPC progressing after docetaxel who had PET imaging with 68Ga-PSMA-11 that showed high PSMA-expression (at least one site with SUVmax≥20) and 18F-FDG demonstrating no sites of disease of FDG-positive and PSMA-negative (discordant disease). Once enrolled, participants were randomly assigned in a 1:1 fashion to LuPSMA (8.5-6GBq every 6 weeks, maximum 6 cycles) or cabazitaxel (20mg/m2 every 3 weeks, maximum 10 cycles).

The key secondary endpoint of overall survival was analyzed by intention-to-treat and summarized by restricted mean survival time (RMST) to account for non-proportional hazards.

Dr. Hofman then moved to a discussion of screen failures in the initial evaluation period of the TheraP trial. These screen failures were due to either low PSMA expression or PSMA/FDA discordance. As noted in the figures below, patients who failed screening had a substantially worse overall survival and lower RMST.

No additional safety signals were identified with longer follow-up. Thus, when we look to apply these data to practice, Dr. Hofman highlighted the strengths of TheraP including the prospective, randomized, multi-center design, three years of follow-up, and use of an active control arm. However, there was substantial post-protocol cross-over as well as post-randomization withdrawal among men in the cabazitaxel arm which confound the assessment of overall survival. However, it is clear that LuPSMA is more active than cabazitaxel (as noted by PSA response rates, radiographic progression-free survival, and PSA-progression-free survival) with similar overall survival to cabazitaxel (a proven life-prolonging therapy) with fewer adverse events and better patient reported outcomes.

Thus, Dr. Hofman concluded that LuPSMA is a suitable option for men with mCRPC progressing after docetaxel, with lower adverse events, higher response rates, improved patient-reported outcomes, and similar OS compared with cabazitaxel. Median survival was considerably shorter for patients excluded on PSMA/FDG-PET due to either low PSMA expression or FDG-discordant disease who would otherwise be eligible for LuPSMA.

Presented by: Michael S. Hofman, MBBS (Hons), FRACP, FAANMS, Professor of Molecular Imaging, The University of Melbourne, and Nuclear Medicine Physician in the Centre for Cancer Imaging at the Peter MacCallum Cancer Centre in Melbourne, Australia