She began by noting that the castrate-sensitive biochemical recurrence space encompasses a huge and heterogeneous population: 20-40% of patients who initially were diagnosed with clinically localized prostate cancer who are treated with either surgery or radiotherapy.

The diagnosis of biochemical recurrence, and its definition, depends on the local therapy received: while all patients with biochemical recurrence have a risking PSA following local therapy, patients who have initially received radiotherapy as defined as having biochemical recurrence when their PSA reaches 2 ng/mL above the post-treatment nadir (Phoenix definition) while those who were initially related with surgery have a PSA of 0.2 ng/mL on two occasions. Additionally, patients must have a normal testosterone and no evidence of metastasis on conventional imaging (computed tomography scan and technetium-99 bone scan). Notably, the increased use of new, more sensitive PET imaging techniques (such as fluciclovine-F18, choline C-11, 68Ga-PSMA-11, and DCFPyL-F18) are able to detect micro-metastatic disease though the effect on overall survival is unclear.

Highlighting this, she cited the example of the FDA package insert for DCFPyL (Piflufolastat-F18), she noted that these approaches are indicated for patients with suspected metastasis who are candidates for initial definitive therapy or those with suspected recurrence based on elevated serum PSA level (ie. biochemical recurrence). However, Dr. Paller emphasized two important questions to consider: first, will we be able to get these studies for our patients and, second, will these inform treatment. Addressing the first, these agents are approved and funded by Medicare, insurance coverage can be somewhat difficult.

Dr. Paller noted that the biochemical recurrence space is defined by PSA results. However, as PSA is an imperfect biomarker, she emphasized that PSA results should inform care but not dictate it. PSA is not and should not be the primary measure of progression in prostate cancer. Instead, radiographic imaging is the primary objective measure of disease progression. 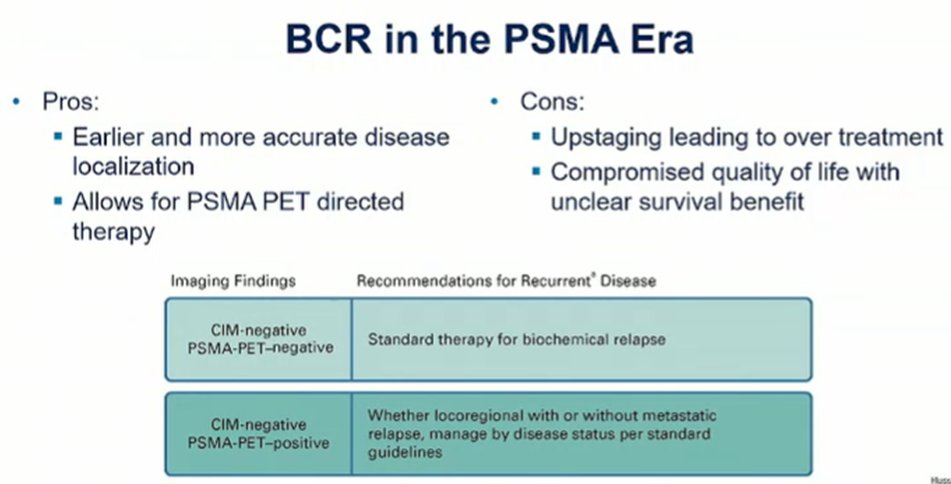 Considering the question of when to initiate androgen deprivation therapy (ADT) in patients with biochemical recurrence, Dr. Paller highlighted data from the TOAD trial which compared the use of immediate ADT (started within 8 weeks of randomization) or delayed ADT (at least 2 year delay before starting ADT, except in the case of symptomatic disease, metastases, or a PSA doubling time of less than 6 months), with a focus on Group 1 which included patients with PSA relapse. Importantly, the TOAD trial showed no significant difference in overall survival, despite a non-significant late separation of the curves. Perhaps even more importantly, nearly 40% of patients in the delayed arm never received ADT. Thus, we can avoid therapy for many patients – most patients should discuss with their physicians whether observation or ADT is most appropriate. There is an unclear benefit of early initiation of ADT unless patients are symptomatic, have metastatic disease, or have a PSA doubling time of less than 6 months.

While there is considerable heterogeneity among patients with BCR, she identified important clinical factors to predict disease progression. Citing data from Dr. Antonarakis, Dr. Paller noted that patients with Gleason score 8-10 and those with PSA doubling time less than 9 months are at particularly high risk of development of metastatic disease.

In addition to these characteristics, she noted that patients who have biochemical relapse less than 18 months following their local treatment as well as those with high initial PSA levels and those with particularly worrisome pathological findings including intraductal carcinoma, seminal vesical invasion, or extraprostatic extension. In particular, she noted that patients with intraductal carcinoma may have metastatic disease even with very low PSA levels.

Dr. Paller then discussed results of the PR7 trial of intermittent compared to continuous ADT. Including patients with biochemical recurrence at least one year following radiotherapy who had a PSA of at least 3 ng/mL, patients were randomized to either continuous ADT or intermittent ADT with 8 month treatment cycles. For patients on intermittent therapy, ADT was held when PSA was less than 4 ng/mL and not more than 1 ng/mL more than previously and was restarted when PSA reached 10 ng/mL. There were no significant differences in median overall survival between those receiving continuous (9.1 years) or intermittent therapy (8.8 years). Further, those in the intermittent arm had better quality of life.

In conclusion, Dr. Paller noted that biochemical recurrence is common. While PSA is critical for diagnosing BCR, it should not be the only factor considered in determining treatment approach. The risks and benefits of treatment should be considered when initiating ADT.