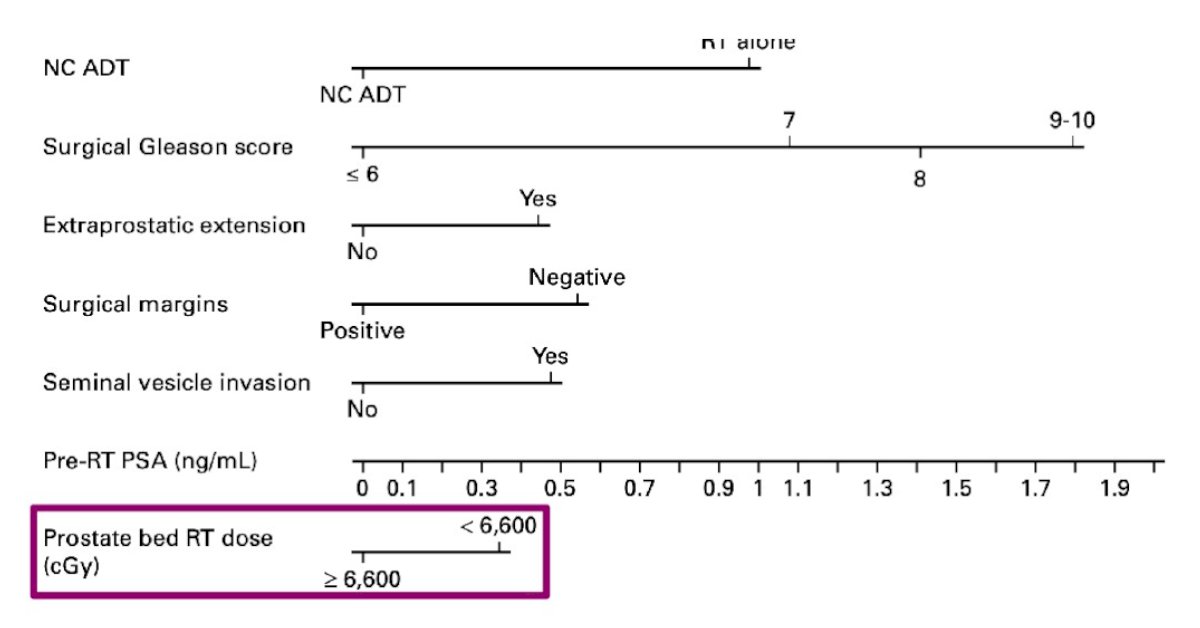 Furthermore, Dr. Parker notes that the SAKK 09/10 trial aimed to compare conventional and dose-intensified salvage radiotherapy, randomizing patients to conventional-dose (64 Gy) or dose-intensified salvage radiotherapy (70 Gy) to the prostate bed without hormonal therapy. After median follow-up of 6.2 years, the median freedom from biochemical recurrence was 8.2 years in the 64 Gy arm and 7.6 in the 70 Gy arm (log-rank p = 0.4), with a hazard ratio of 1.14 (95% CI 0.82-1.60). Dr. Parker notes that this result is not that surprising, given that in this setting radiotherapy is treating micrometastatic disease and these doses are not that different. 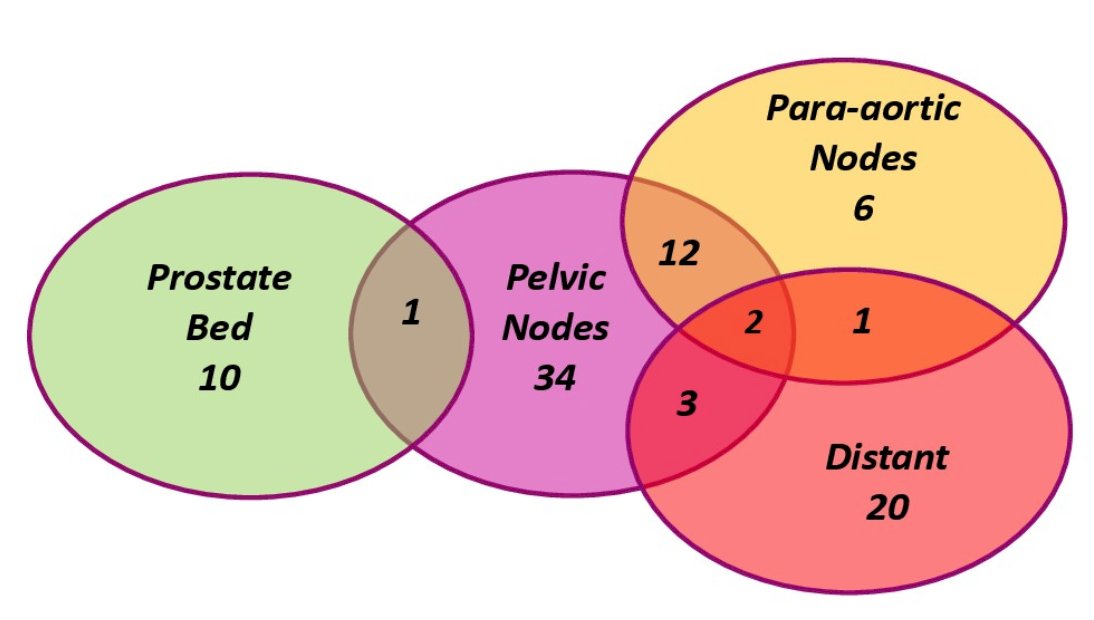 More recent evidence has come from the RTOG 0534 SPPORT trial assessing the addition of ADT and pelvic lymph node treatment to prostate bed salvage radiotherapy.3 Eligible patients for this trial were those who after prostatectomy had a persistently detectable or an initially undetectable and rising PSA of between 0.1 and 2.0 ng/mL. Patients were randomly assigned to receive prostate bed radiotherapy alone at a dose of 64.8-70.2 Gy at 1.8 Gy per fraction daily (group 1), prostate bed radiotherapy plus short-term ADT (group 2), or pelvic lymph node radiotherapy (45 Gy at 1.8 Gy per fraction) plus prostate bed radiotherapy plus short-term ADT (group 3). The primary endpoint was freedom from progression, in which progression was defined as biochemical failure according to the Phoenix definition (PSA ≥2 ng/mL over the nadir PSA), clinical failure (local, regional, or distant), or death from any cause. Among 1,792 patients randomized to the three groups, 1,716 patients were evaluable. At a median follow-up among survivors of 8.2 years (IQR 6.6-9.4), the 5-year freedom from progression rates were 70.9% (95% CI 67.0-74.9) in group 1, 81.3% (78.0-84.6) in group 2, and 87.4% (84.7-90.2) in group 3: 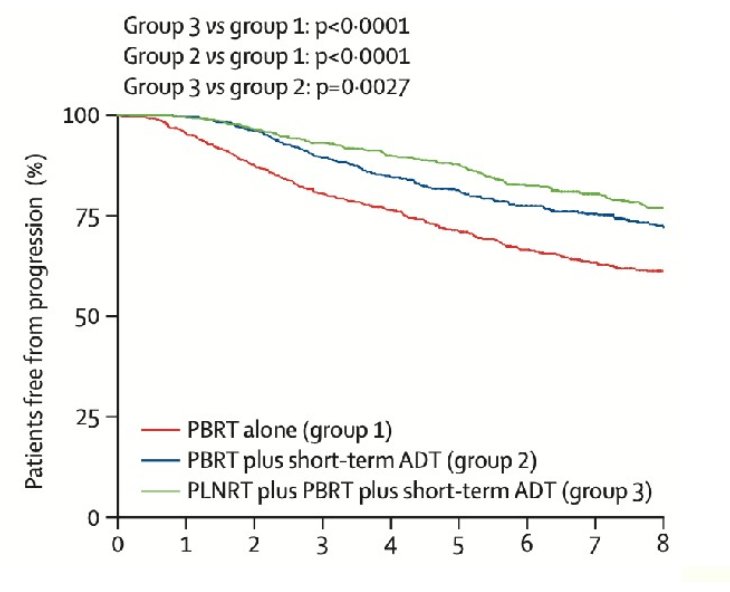 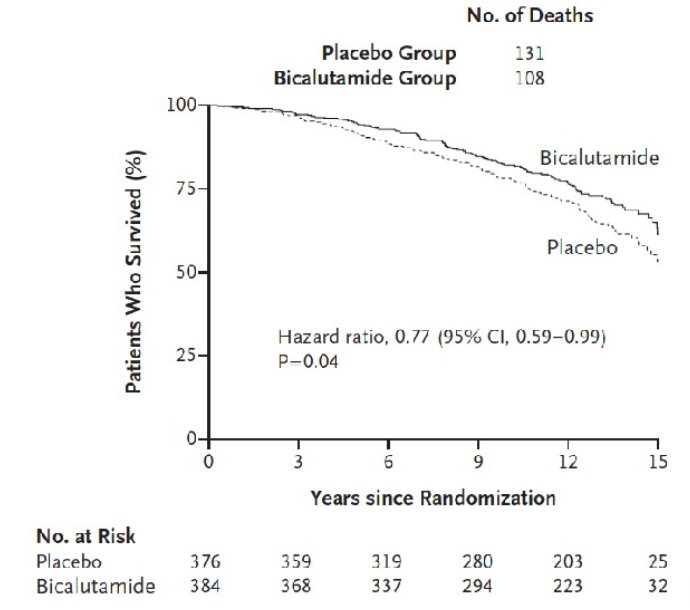 Dr. Parker notes that later this year we will likely have trial data coming from the RADICALS-HD trial, which is testing different durations of hormone therapy during salvage radiotherapy: 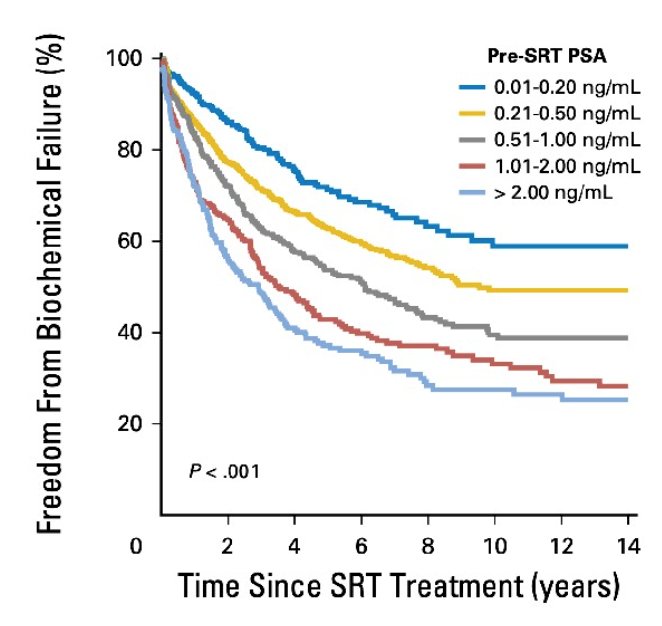 However, based on early PSMA PET/CT data, Dr. Parker questions whether we can potentially wait to treat patients to ensure there is meaningful clinical benefit to treatment. Specifically, patients that are planned for prostate + pelvic nodal radiotherapy that have PSMA PET/CT lesions outside of the planned salvage radiotherapy treatment zone, may have major implications for salvage therapy planning for ~20% of patients in the biochemical recurrent setting.11