(UroToday.com) At the 2022 American Society of Clinical Oncology Annual Meeting held in Chicago and virtually, a breakout session assessing the best approaches and treatment updates in biochemically recurrent prostate cancer featured a presentation from Dr. Thomas A. Hope discussing the manner in which molecular-based imaging is defining the landscape of prostate cancer.

Dr. Hope began by emphasizing that the nature and localization of recurrence are dependent on technology and imaging modality. For example, citing data from the 1990s, authors used transrectal ultrasound to characterize the location of recurrent disease and therefore characterised disease sites including the anastomosis (anterior, posterior, and lateral), bladder neck, retrovesical space, or not visualized. While this seems somewhat antiquated based on our current technological approaches, Dr. Hope noted that in future our current approaches may end up appearing antiquated themselves.

Dr. Hope then moved to discussing prostate specific membrane antigen (PSMA) based imaging approaches. While PSMA is not actually entirely specific to prostate cancer, in the clinical setting of biochemically recurrent prostate cancer, PSMA-based PET imaging is both very sensitive and very specific.

In this context, Dr. Hope emphasized the use of PSMA-based PET imaging is driven by the value of knowing where recurrent disease is when planning therapy. To highlight this, he presented the case of a 69 year old man with a PSA of 0.67 ng/mL following radical prostatectomy. This gentleman had disease in both the right humerus and the left internal iliac node. Thus, standard salvage radiotherapy approaches, if used in the absence of PSMA-PET imaging, would be inadequate treatment of this patient.

Dr. Hope further noted that there are many molecules available for both diagnostic and therapeutic purposes which target PSMA. However, he noted that all of these agents share the same urea binding motif. Thus, from a clinical perspective, in the same clinical scenario, he suggested that agents should be considered equivalent. As a result, in the diagnostic setting, he emphasized that DCFPyL and 68Ga-PSMA-11 should be considered interchangeable. 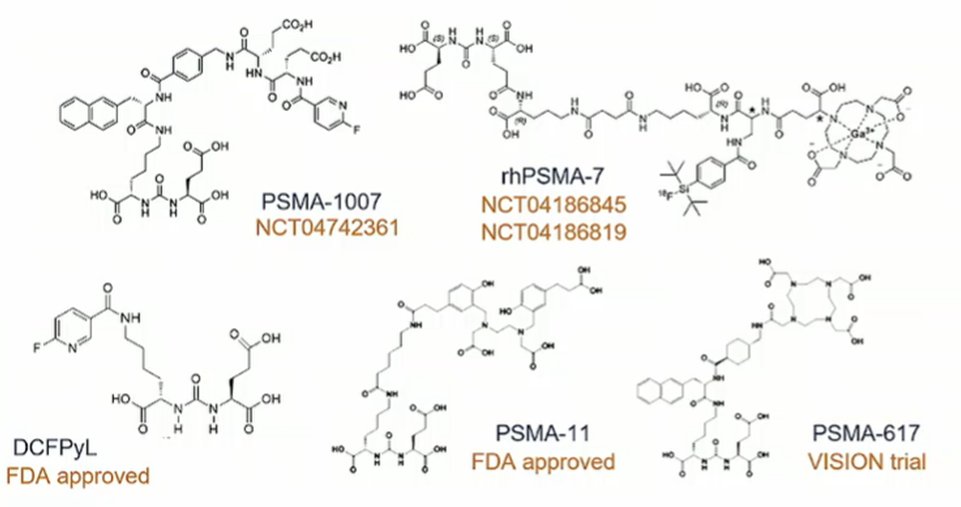 While these varying PSMA tracers are equivalent, Dr. Hope emphasized that PSMA-PET based imaging substantially outperforms fluciclovine. This is in large part because of the better tumor to background ratio for PSMA-PET imaging. In a direct comparison led by Dr. Calais, PSMA-11 resulted in essentially twice the patient-level detection rates. More notably, all extra-pelvic disease was seen with PSMA-PET imaging. These sites of disease are arguably the most likely to change patient care.

Dr. Hope further noted that fluciclovine is relatively difficult to interpret, compared to PSMA-PET. As a result, the inter-reader variability is much better for PSMA-PET (0.67) to fluciclovine (0.20).

He then moved to discussing the two major trials of PSMA-PET in the BCR space, using 6Aga-PSMA-11 from UCLA and UCSF and 18F-DCFPyL based on the multi-institutional CONDOR trial. Overall, these trials were relatively similar in terms of the patient cohort and performance of the imaging approaches.

Dr. Hope then emphasized that, while based on a single reader study with slightly higher detection rates than many other studies, the detection rates on PSMA-PET are directly related to the serum PSA level at the time of imaging. While rates at nearly 96% for patients with PSA levels of 10 ng/mL or higher, they are still nearly 50% at PSA levels less than 0.25 ng/mL. 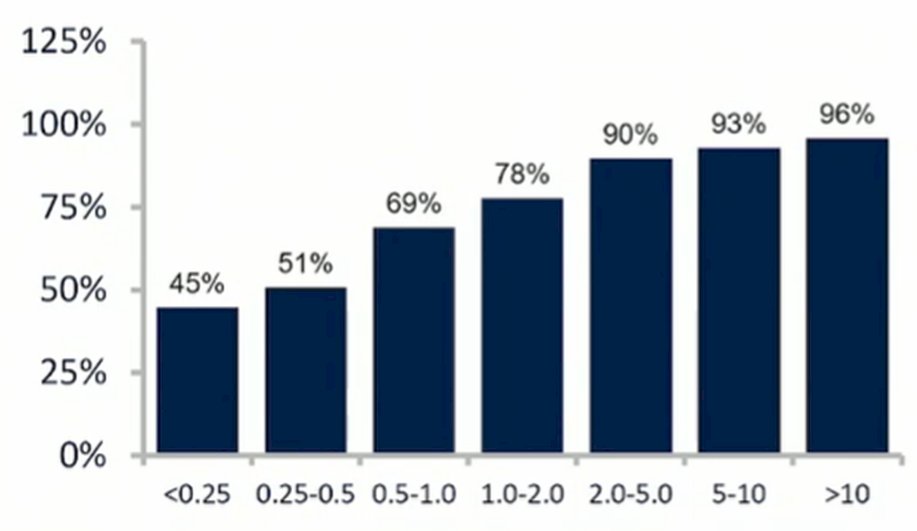 While the data presented so far demonstrate that novel molecular imaging results in an increased detection of disease, the next important question is how this changes patient management and whether outcomes are improved. To date, the best data on this question comes from the EMPIRE-1 study. In this trial, patients with biochemical recurrence following radical prostatectomy underwent either fluciclovine or conventional imaging prior to salvage radiotherapy. The primary endpoint of event free survival, defined as biochemical or clinical recurrence of progression or the initiation of systemic therapy was significant improved at four-years for patients who had treatment planned with fluciclovine (75.5%) as compared to conventional imaging (51.2%).

This is almost certainly because PSMA-PET allows for localization of disease more accurately. Dr. Hope highlighted data showing that more than half of patients with biochemically recurrent disease following radical prostatectomy with a PSA of less than 2 ng/mL had PSMA visible disease. More notably, however, 30% of patients had disease that would fall outside the standard salvage radiotherapy fields. Thus, in the absence of PSMA-PET imaging, these patients will end up being incompletely treated. While this offers a potential benefit for treatment intensification, Dr. Hope emphasized potentially concerning patterns in that patients with no disease on PSMA PET may have a change towards surveillance, rather than salvage radiotherapy which is a treatment approach with proven benefit. 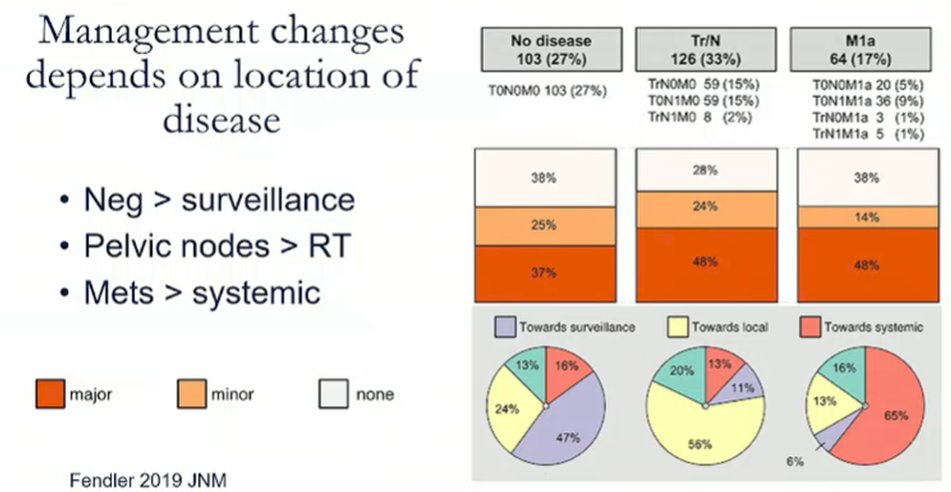 Led by Dr. Calais, there is an ongoing trial of 68Ga-PSMA-11 in guiding prostate cancer salvage radiotherapy planning that has completed accrual and is due to read out in the coming years.

Some what relatedly, but in what he called a “total aside”, Dr. Hope discussed the question of so-called PSMA-negative tumors. This is a not entirely uncommon finding in which disease is apparent based on MRI but not visualized on PSMA-PET. In the context of mCRPC, patients with PSMA-negative disease (or FDG/PSMA mismatch) have a dismal prognosis, with an overall survival of 2.5 months.

However, in the localized setting with castration sensitive disease, a lower SUV is actually associated with lower PIRADS scores and less aggressive disease (ie. lower grade histology) based on data from the PRIMARY trial of PSMA-PET imaging prior to prostate biopsy.

Taken somewhat further, patients with negative PSMA-PET imaging at the time of biochemical recurrence who received salvage radiotherapy did really well, independent of PSA. Thus, Dr. Hope emphasized that these patients are most appropriate to receive salvage radiotherapy and will likely have among the best long-term results.

Dr. Hope then spent some time looking forward to consider how diffusion of PSMA-PET imaging will affect the prostate cancer landscape. In the setting of initial staging for patients with castration sensitive disease, localized prostate cancer is defined based on conventional imaging currently and then stratified according to risk prediction models incorporating clinicopathologic details or by the use of genomic assays. For patients initially diagnosed with metastatic disease, conventional imaging allows subdivision into low and high volume of disease based on CHAARTED criteria. Considering the increasing utilization of PSMA-PET imaging, these categories bear re-evaluation. It is, for example, an unanswered question how we should categorize volume of disease based on PSMA-PET.

While we assume that increasing utilization of PSMA-PET will invariably result in upstaging, Dr. Hope emphasized that traditional bone scan has relatively low specificity. Thus, there are a significant subset of patients who have “marginally positive” bone scans who are currently treated as M1. Use of PSMA-PET imaging may actually result in down staging of patients.

As a result, with widespread use of PSMA-PET imaging, the initial staging of patients with castration sensitive disease will likely delinate a number of groups of patients: those who are PSMA negative (localized disease), those with oligometastatic disease, those with some version of “low volume” disease, and those with “high volume” disease. These new categorizations will change the way we think of historical data using conventional imaging.

Dr. Hope then moved to discussing biochemical recurrent disease in the castration sensitive space. Currently, these patients may be M0 biochemically recurrent or have metachronous metastatic castration sensitive disease based on conventional imaging. Widespread uptake of PSMA-PET will potentially dramatically change treatment planning. Highlighting a specific patient case example, he emphasized the ability to detect very small lesions with patients identified as having M1 disease on PSMA-PET in which the largest lesion was 4mm. Thus, moving forward he suggested that there are a variety of new categories, paralleling those in the initial staging setting: PSMA negative (localized disease), those with oligometastatic disease, those with some version of “low volume” disease, and those with “high volume” disease.

There are additionally a large number of effects of the use of PSMA-PET imaging in nmCRPC (with recategorization of many of these patients to M1 disease, including oligometastatic disease in some cases) as well as in mCRPC (including PSMA negative disease, PSMA mixed disease, and PSMA positive disease). These categories are likely to have dramatic effects on treatment selection, though the clinical effect of earlier intensification based on PSMA-PET imaging (compared to conventional imaging) has yet to be proven.

Finally, Dr. Hope discussed the effect of PSMA-PET imaging on trials (both ongoing and planned) in terms of both upfront enrollment and outcome read out emphasizing that these are “really problematic” issues. He used the example of the NRG GU010 trial to highlight this. This trial is evaluating the use of genomic-risk stratified treatment in patients with unfavourable intermediate risk localized prostate cancer. 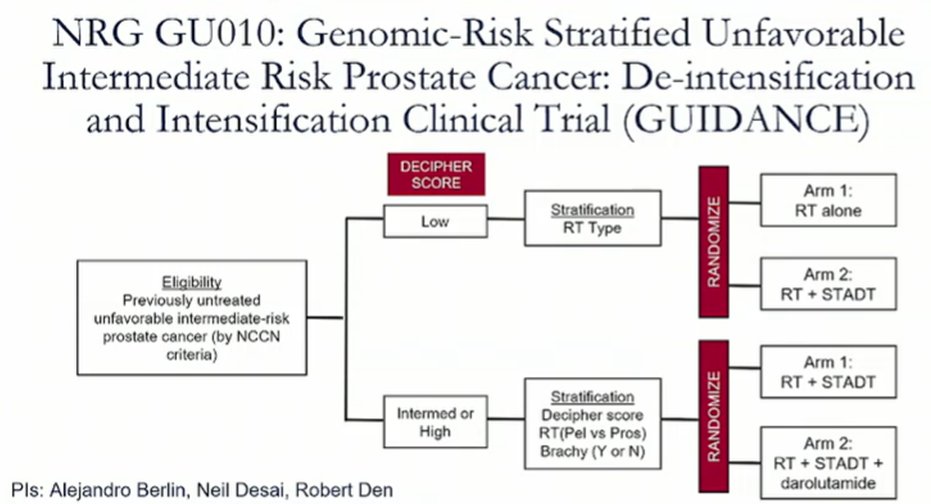 If patients are staged with PSMA-PET prior to enrollment, many patients who would be otherwise included based on staging with conventional imaging will be excluded on the basis of very low volume metastatic disease. Thus, these patients who are non-metastatic but at high-risk based on conventional imaging will be removed from the study cohort. In doing so, we reduce the event rate in the retained patient cohort which will serve to delay the time necessary for read out and bias towards the null. 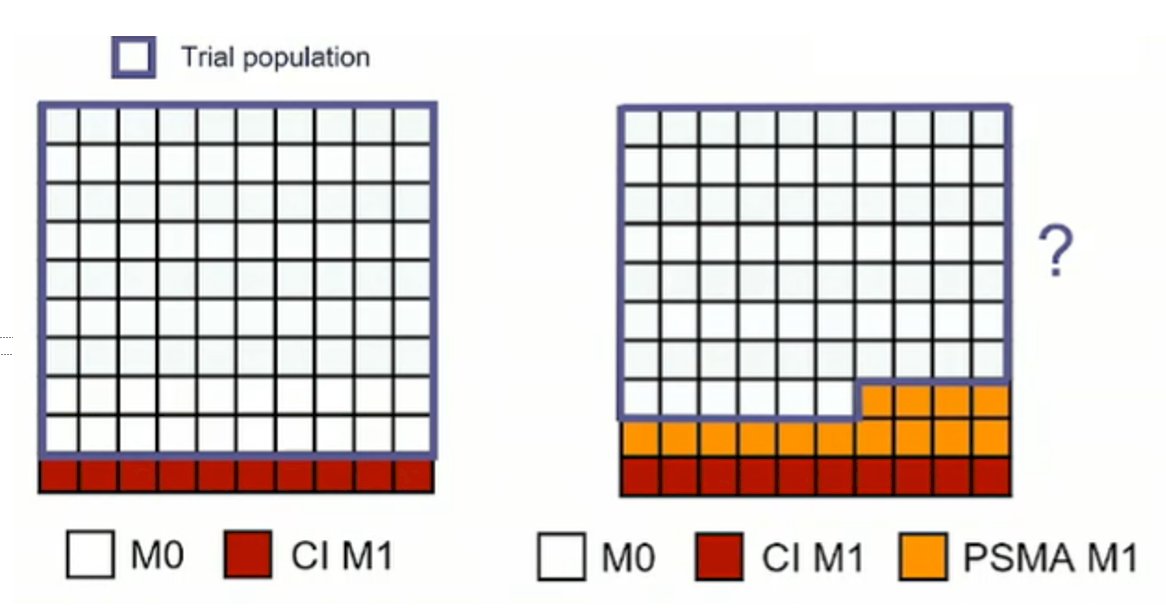 Further, there is a correlation between Decipher scores and PSMA-avid nodal disease. Thus, the use of PSMA-PET for patient selection may fundamentally affect the intervention planned.

More importantly, is the effect on study endpoints. To date, studies have been designed on the basis of conventional imaging. Metastasis-free survival, based on conventional imaging, is a validated surrogate for overall survival and an accepted endpoint for drug approach. However, it is not clear that earlier detected disease by PSMA-PET has same association with overall survival. To date, there is no agreed upon way to include PSMA in trials. Further, patients who receive PSMA-PET at the time of biochemical recurrence may receive salvage therapies (including metastasis-directed therapy) before reaching an MFS endpoint (as defined based on conventional imaging). Further, PSMA-PET will likely be performed on the basis of specific clinical indications while conventional imaging will continue to be performed on the basis of standard intervals. Finally, it is difficult to define progression based on PSMA-PET (in the absence of other imaging progression) for patients without baseline PSMA-PET.

In summary, Dr. Hope emphasized that there are now four approved NDAs for PSMA-PET diagnostic imaging. Use of these approaches affects the management of more than half of men with biochemically recurrence, the most common of which is planning for radiotherapy. However, moving forward, increasing utilization of PSMA-PET will “wreak havoc” with trial design, particularly in studies where metastasis-free survival is the primary endpoint.