Currently, we have four IO/TKI trials that have showed PFS and OS benefit versus sunitinib, including CheckMate-214 [1], KEYNOTE-426 [2], CheckMate 9ER [3], and CLEAR [4]. A summary of the PFS and OS results is as follows:

Dr. Kapoor asks: How much further can we go with TKI, mTOR, and IO therapies? Triplet therapy (PD1 inhibitors, CTL4 inhibitor, TKI)? What about novel new mechanism of action therapies? In this presentation Dr. Kapoor discussed the following abstracts “Phase 1 LITESPARK-001 (MK-6482-001) study of belzutifan in advanced solid tumors: Update of the clear cell RCC cohort with more than 3 years of total follow-up” presented by Dr. Eric Jonasch, “A phase 1b/2 study of batiraxcept (AVB-S6-500) in combination with cabozantinib in patients with advanced or metastatic clear cell RCC who have received front-line treatment (NCT04300140)” presented by Dr. Neil Shah, and “Characterization of the microbial resistome in a prospective trial of CBM588 in metastatic RCC offers mechanism for interplay between antibiotic use and ICI activity” presented by Dr. Nazli Dizman.

VHL disease is associated with malignant or benign tumors, including renal cell carcinoma (RCC), pancreatic neuroendocrine tumors (pNETs), and hemangioblastomas. Alterations in the VHL gene cause aberrant stabilization and accumulation of HIF-2α, leading to activation of genes associated with tumor growth. Belzutifan is a selective small molecule HIF-2alpha inhibitor, showing favorable safety and antitumor activity in previous studies. At ASCO 2021, Ramaprasad Srinivasan presented data of an ongoing open-label phase 2 study (NCT03401788) of belzutifan in patients with VHL disease, noting over a median follow-up of 21.8 months (range 20.2-30.1), the objective response rate was 49.2% (95% CI 36.1-62.3%). Additionally, there were 40 confirmed partial responses (ORR, 49.2%), 4 (6.6%) unconfirmed responses, and no patients had progressive disease. The authors concluded at that time that belzutifan demonstrates clinical benefit and has a favorable safety profile in patients with VHL disease and associated tumors.

Dr. Kapoor’s conclusions from the LITESPARK presentation are as follows:

Dr. Kapoor then discussed the phase 1b/2 study of batiraxcept (AVB-S6-500) in combination with cabozantinib clear cell RCC who received front-line therapy. The AXL receptor and its activating ligand GAS6 drives metastasis and therapeutic resistance in cancer. AXL is up-regulated by HIF-1 signaling in VHL-deficient and hypoxic tumor cells, and overexpression is strongly correlated with clear cell RCC patient prognosis and survival. Batiraxcept is a recombinant fusion protein containing an extracellular region of human AXL combined with the human immunoglobulin G1 heavy chain (Fc). This is highly specific and potent for AXL inhibition:

Furthermore, batiraxcept binds GAS6, thus inhibiting interaction with AXL and reducing invasion and migration of human cancers. It has been well tolerated in prior trials, with infusion related reaction and fatigue being the most common adverse events.

In this trial, batiraxcept at doses of 15 and 20 mg/kg, plus cabozantinib 60 mg daily, was evaluated using a 3+3 dose escalation study design. The primary objective was safety, and secondary and exploratory objectives included identification of the recommended phase 2 dose (RP2D), overall response rate (ORR), and duration of response (DOR). Additionally, correlation of serum soluble AXL/GAS6 with ORR was evaluated. Key eligibility criteria include previously treated (two or more lines of therapy) clear cell RCC patients, and prior treatment with cabozantinib was not allowed. The trial schema is as follows: 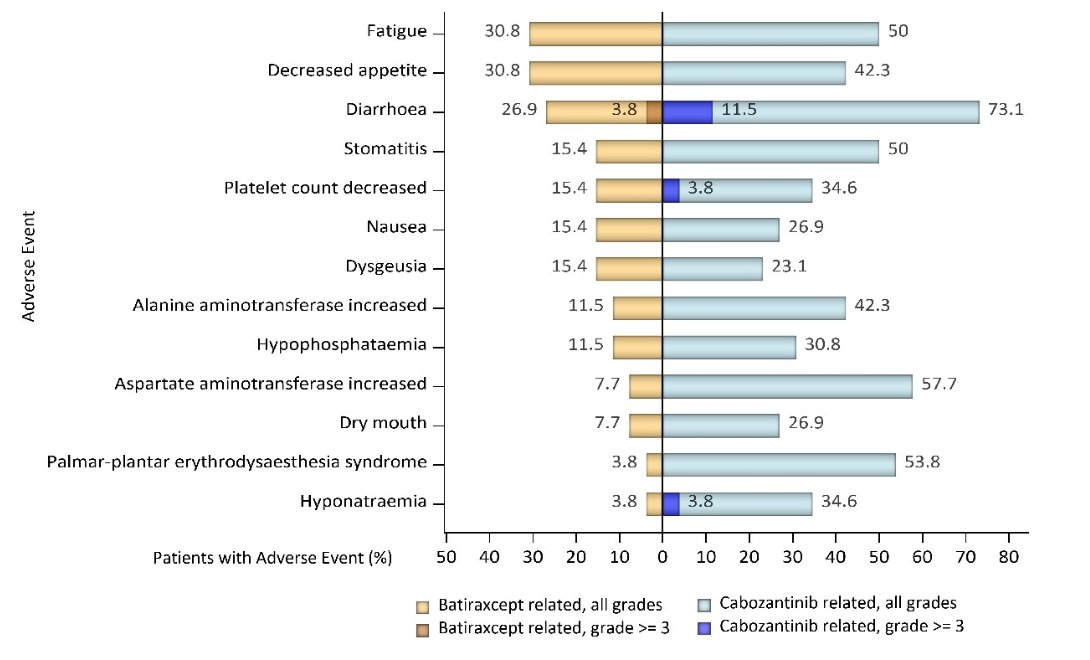 Among the patients who had baseline soluble AXL/GAS6 ratio of ≥ 2.3, the ORR was 67%. Regardless of baseline soluble AXL/GAS6 ratio, 3-month duration of response was 100%, and 6-month progression free survival was 79%. The ORR was 42% and no patients had primary progressive disease. There were 8 patients that experienced resolution of one or more target lesions, of which all responders were biomarker high: 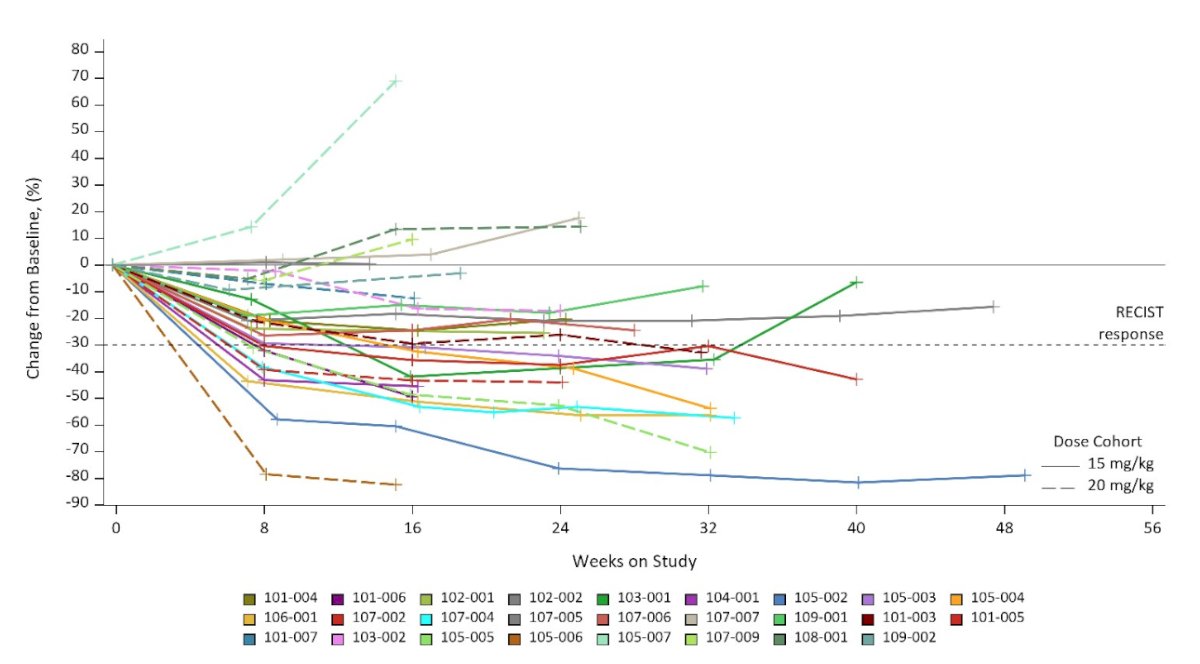 Dr. Kapoor noted that Dr. Shah and colleagues concluded this presentation noting that batiraxcept plus cabozantinib is well tolerated, and the RP2D of batiraxcept was identified as 15 mg/kg. Early efficacy signals were observed including 100% duration of response at 3 months, and baseline soluble AXL/GAS6 may serve as a potential biomarker to enrich the population.

To conclude his presentation, Dr. Kapoor discussed the prospective trial of CBM588 in metastatic RCC. Dr. Kapoor notes that the negative association between immune checkpoint inhibitor response and antibiotic therapy is well defined. Paradoxically, retrospective data of the live bacterial product CBM588 in patients with advanced small cell lung cancer showed improved outcomes with immune checkpoint inhibitors when the combination of CBM588 and antibiotics were employed. Dr. Dizman and colleagues postulated that the microbial resistome (genes encoding antimicrobial resistance) could shift in a manner with CBM588 therapy that facilitated ICI response. Patients with newly diagnosed mRCC were randomized to nivolumab + ipilimumab or nivolumab + ipilimumab + CBM588 in a 1:2 ratio. Stool samples were collected at baseline and week 12, and whole-metagenome sequencing was performed to analyze stool microbiome composition. Antibiotic resistance genes were inferred using publicly available database, and groups of antibiotic resistance genes for various classes of antibiotics were characterized. The trial schema is as follows: 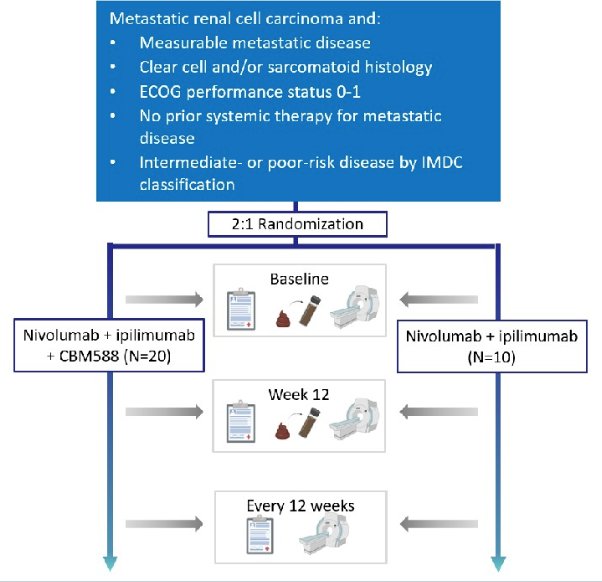 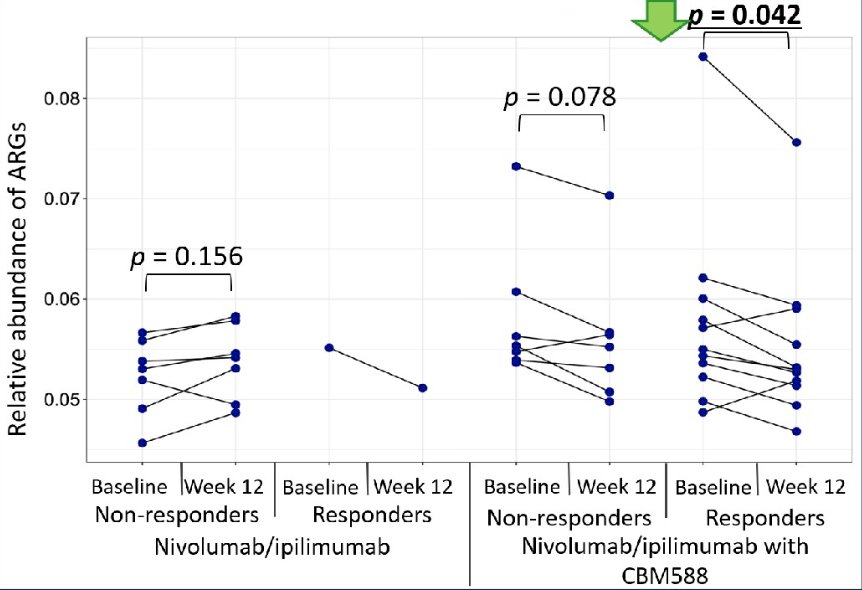 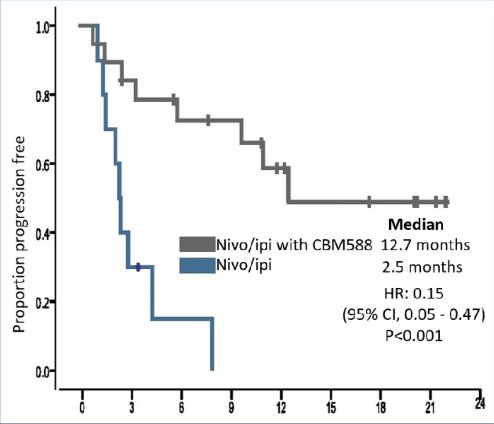 Dr. Kapoor’s conclusions of the CBM588 trial are as follows: