Dr. Suarez started by highlighting that the definition of PFS2 is the time from randomization to disease progression on next line of treatment, or death from any cause (whichever occurs first). Of note, this includes time periods that patients are on second line therapy: 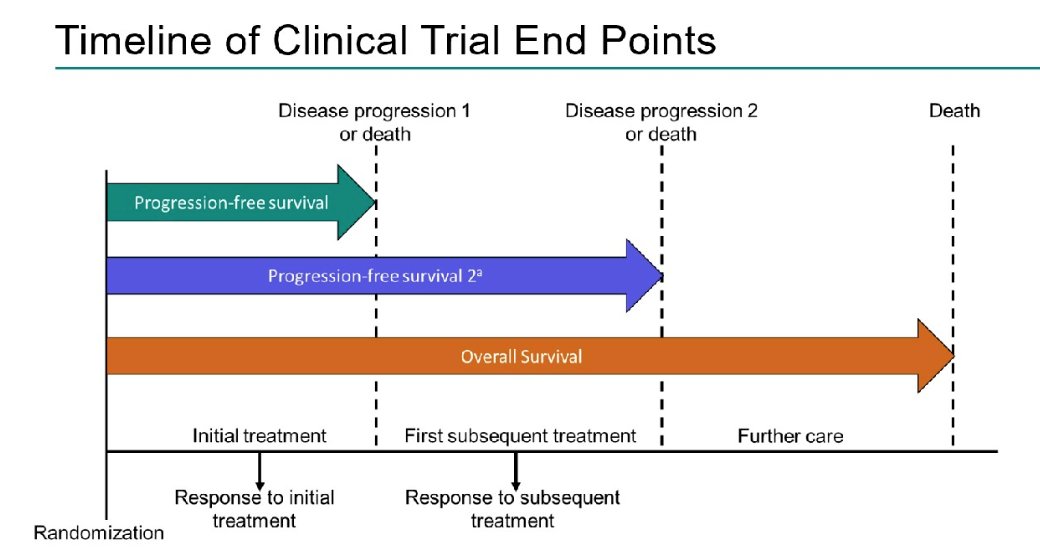 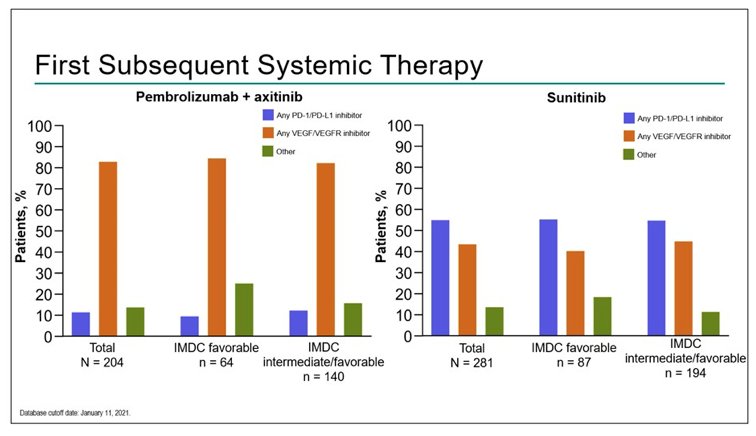 The final abstract discussed by Dr. Suarez was the impact of subsequent therapies in patients with advanced RCC receiving lenvatinib + pembrolizumab in the CLEAR trial. PFS2 was evaluated in all pts randomly assigned to lenvatinib 20 mg orally QD + pembrolizumab 200 mg IV Q3W (n=355) or sunitinib 50 mg orally QD (4 weeks on/2 weeks off) (n=357) using Kaplan-Meier estimates, and compared between treatment arms via a log-rank test stratified by geographic region and MSKCC prognostic groups. Among patients who received subsequent anticancer therapy in the lenvatinib + pembrolizumab (n=117 patients) and sunitinib (n=206 patients) arms, median time to next-line therapy of therapy was 12.2 months (range 1.45–37.36) and 6.4 months (range 0.39–28.52), respectively. A summary of subsequent therapies is as follows: 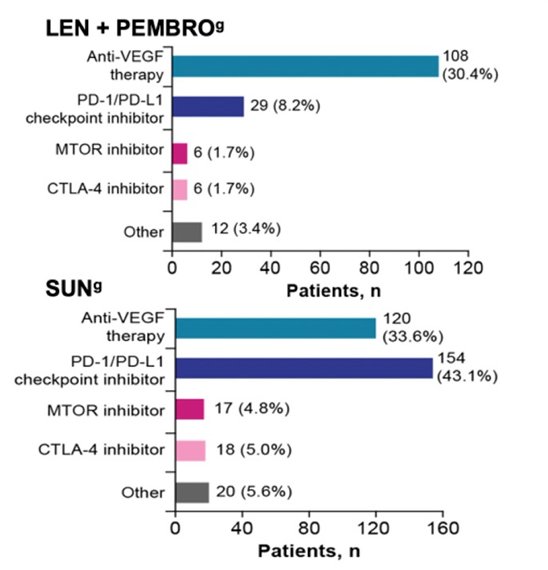 According to Dr. Suarez, there are four options with regards to what to do next after progression on first-line therapy, including: (i) VEGF-targeted monotherapy, (ii) IO after IO, (iii) new targets, and (iv) ongoing trials. With regards to VEGF-targeted monotherapy, there are retrospective studies that have tested TKI after IO, with ORRs ranging from 20-54% and PFS or TTF ranging from 6-13 months, as summarized in the following table:

Additionally, there are prospective trials that have tested TKI after IO, with ORRs ranging from 19-45% and PFS ranging from 5.6-9.3 months, as summarized in the following table:

For IO after IO, this may be thought of as an IO “boost/rechallenge”, which has been tested in the HCRN-GU-16-260, TITAN-RCC, OMNIVORE-RCC, and FRACTION trials:

In a meta-analysis assessing salvage nivolumab + ipilimumab, this analysis included 7 studies (retrospective and prospective), with 310 patients and an ORR of 14%.

With regards to new targets, Dr. Suarez highlighted work presented by Dr. McDermott at ESMO 2021 testing belzutifan + cabozantinib. The ORR in this study was 28.8% (all confirmed partial responses) and durable control rate was 92.3%, with no appreciable differences across IMDC risk category and prior anticancer therapy:

There are several ongoing clinical trials in this disease space, including:

Dr. Suarez concluded her presentation by discussing sequencing challenges in RCC with the following take-home messages: