(UroToday.com) Following three abstract presentations in the poster discussion session focused on Kidney and Bladder cancers at the 2022 American Society of Clinical Oncology Annual Meeting held in Chicago and virtually, Dr. Matt D. Galsky provided a discussion of HER-2 in bladder cancer though he added the subtitle “there are no bad targets… just suboptimal approaches”.

To this end, he noted that all three abstracts focused on the antibody-drug conjugate (ADC) RC48. He noted that there are four key components of an ADC: the antigen, the antibody, the payload and the linker. Considering each of these, we can examine the potential for this this new therapeutic. 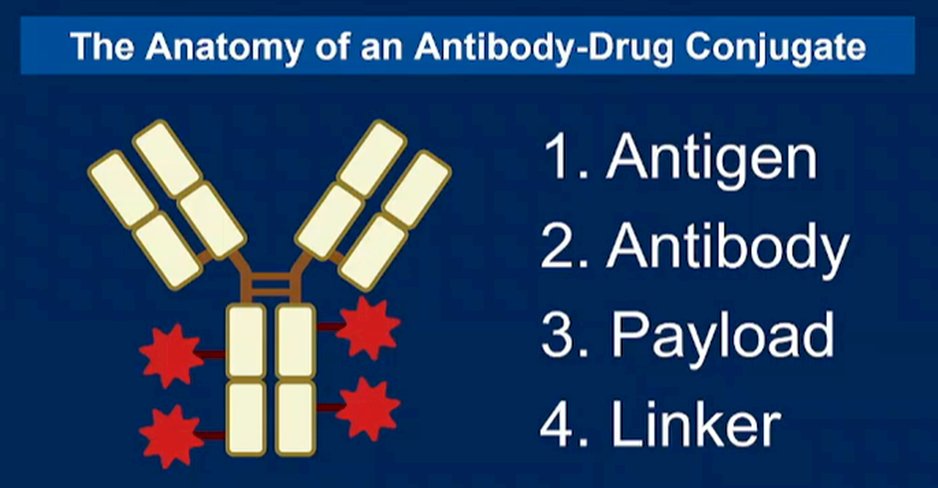 When designing an ADC, the target is critical. Thus, he considered whether HER-2 is a good target in urothelial cancer. Some of the early, and seminal, work in HER-2 found over expression rates of 12.4% in urothelial carcinoma. However, this was explored as a treatment target using single agent HER-2 tyrosine kinase inhibitors, adjuvant HER-2 autologous cellular therapy, and using trastuzumab, without meaningful benefit from any of these approaches. Further T-DM-1 was tested without benefit as well. While these treatment failures may tempt us to say that “we’re barking up the wrong tree”, Dr. Galsky noted that failure is often a prelude to success.

Moving to HER-2 immunohistochemistry (IHC), he noted that this is “all over the map” in urothelial carcinoma. In what he described as some of the better data available based on prospective testing of HER-2 with central review, HER-2 ICH positivity in primary tumors was 74% at the 1+ level, 32% at the 2+ level, and 4% at the 3+ level. However, not all HER-2 expression is created equal and there may be substantial heterogeneity (including between tumor types) in HER-2 expression. In bladder cancer, HER-2 staining is often patchy.

In these circumstances, the linker used for ADCs is particularly important. ADC that utilize a non-cleavable linker (such as DM1) have less bystander effect than those with cleavable linkers. The bystander effect may allow for treatment of non-HER2 expressing tumor cells by the ADC based on proximity. Thus, when we consider ADCs tested in urothelial disease, differences in linker, as well as in antibody may be important in considering differential clinical activity.

In addition to using a cleavable linker, RC48 uses a novel antibody with a different epitope than previously investigated agents. This antibody, disitamab, has higher binding affinity.

Given this background, Dr. Galsky then discussed the three abstracts at this year’s ASCO meeting which examined results of the ADC RC48 in HER2 positive patients, in HER2 negative patients, and in combination with immunotherapy.

The first of these provided pooled results from two essentially identical studies examining patients with metastatic urothelial carcinoma who had progressed on at least one prior therapy and have HER-2 IHC staining of 2+ or 3+. While the overall objective response rate was promising at 51%, responses were enriched in patients with higher expression of HER-2, in keeping with the mechanism of action.

However, premised on the bystander effect, this treatment paradigm may work in those with low HER-2. Patients in the second abstract were very similar to the prior study though in this case had HER-2 IHC of 1+ or 0. Perhaps not unexpectedly, the response rate was lower than reported above in the HER-2 positive population and most responses were seen in those with HER-2 1+.

Compared to other ADCs that have been evaluated in advanced urothelial carcinoma, he noted that RC48 appeared to have less rash that EV, perhaps due in part to the fact that it has a different target. However, neuropathy, elevated liver enzymes, and hyperglycemia were still noted.

As alluded to in Dr. Milowsky’s previous talk, there is interest in combining ADCs with immune checkpoint inhibitors. While the combination of enfortumab vedotin with pembrolizumab is currently under investigation, abstract 4520 provided phase IB/II results of the combination of RC48 with toripalimab. Notably, this trial enrolled patients regardless of prior therapy (over 60% were in the first line setting) and regardless of HER-2 status. The authors noted a relatively high response rate (72%) with durable responses noted. These data have now formed the basis of a randomized controlled trial in the first-line setting against standard of care chemotherapy.

While the available studies are limited, he suggested that there may be a promising pattern emerging: among studies of ADCs, those that utilize MMAE as the payload appear to have promisingly high objective response rates.

These data raise numerous questions for further investigation including whether we need a refined, and potentially urothelial carcinoma specific, scoring system for HER-2, whether RC48 offers a benefit compared to enfortumab vedotin (another ADC) in patients with elevated HER-2 expression, whether the targets and payloads are distinct enough to allow for sequential use of multiple ADCs, and what the optimal approach for combining with immune checkpoint inhibition will be. Currently, 30 anti-HER2 ADCs have entered clinical testing and three have been approved in different parts of the world. Thus, this treatment paradigm is advancing quickly and may soon become very clinically relevant.