(UroToday.com) While highly prevalent genetic changes have yet to be identified in patients with advanced prostate cancer, alterations in DNA mismatch repair (MMR), also known as DNA damage repair (DDR), are increasingly common as patients progress through the natural history of the disease process. Identification of these alterations has opened novel treatment options and the potential for targeted therapy using poly(adenosine diphosphate [ADP]-ribose) polymerase (PARP) inhibitors.

Building on this concept, in a Poster Session at the 2020 American Society of Clinical Oncology Virtual Annual Meeting, Neeraj Agarwal, MD, and colleagues present the design and rationale of phase III TALAPRO-2 trial which randomizes patients with metastatic castration-resistant prostate cancer to a PARP inhibitor, talazoparib, and enzalutamide or enzalutamide alone while assessing efficacy, safety, pharmacokinetics, and patient-reported outcomes (PROs). Talazoparib is one of many PARPi available on the market. It has been approved in many countries as monotherapy for patients with human epidermal growth factor receptor 2-negative advanced breast cancer who have known DDR mutations (BRCA1 and BRCA2).

The TALAPRO-2 study will recruit adult men (age 18 years or greater) with metastatic castration-resistant prostate cancer who have asymptomatic or minimally symptomatic disease. Patients had to have progressive disease at study entry defined by at least one of the following: PSA progression, soft-tissue progression, or bony disease progression. Further, patients have to have an ECOG performance status of 0 or 1 and a life expectancy of at least 12 months.

Patients could not have received novel androgen axis inhibiting agents (e.g. abiraterone, enzalutamide, or apalutamide) at the time of castration-sensitive prostate cancer (mCSPC), though they could have received cytotoxic chemotherapy. Further, they could not have received life-prolonging therapy at the time of nonmetastatic CRPC or mCRPC. Patients had to continue on ADT (either via surgical castration or ongoing LHRH agonist or antagonist) throughout the study. Additional exclusion criteria included a lack of adequate organ function. 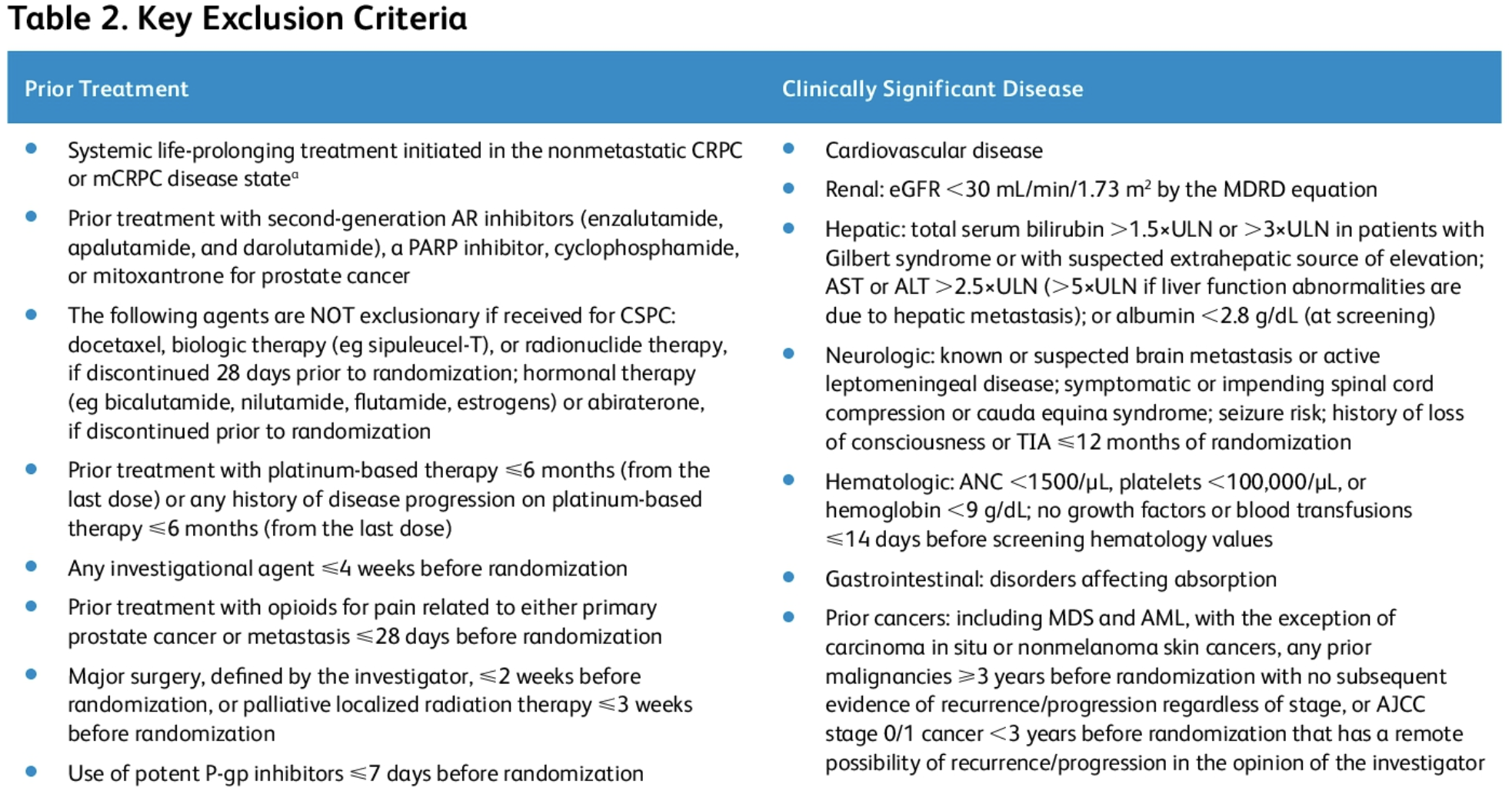 The first portion of the study was an open-label, non-randomized dose-finding study. This was performed among 19 patients. Based on part 1, part 2 of the trial involves a randomized, double-blind, placebo-controlled trial of talazoparib (0.5mg daily) and enzalutamide (160mg daily) versus placebo and enzalutamide. Randomization was stratified according to receipt of prior novel hormonal therapy or docetaxel for CSPC (yes or no) and DDR alteration status (deficient vs nondeficient/unknown) with a primary outcome of radiographic progression-free survival (rPFS), defined as time to progression in soft tissue per RECIST v.1.1 or bone per PCWG3 criteria by independent review or death and key secondary outcome of overall survival. 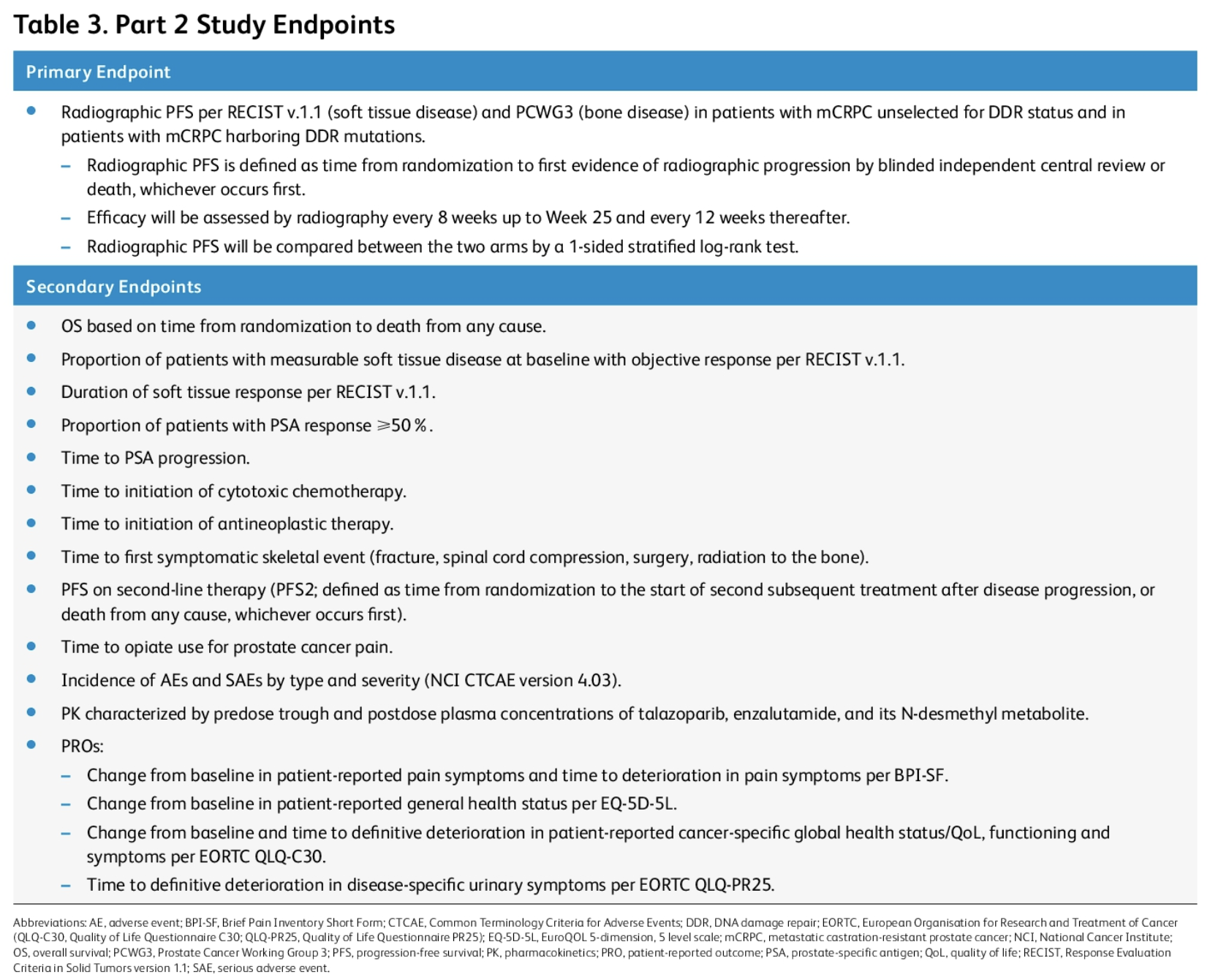