(UroToday.com) Radium 223 and taxane chemotherapy have shown an overall survival benefit in phase three trials in patients with metastatic castrate-resistant prostate cancer.1-3 It is important to note that both treatment options are associated with different degrees of hematological toxicity. The REASSURE (NCT02141438) study is a global, prospective, single-arm, observational study aiming to assess the short- and long-term safety of radium 223 in patients with metastatic castrate-resistant prostate cancer in a real-world setting, over 7 years of follow-up. In this specific presentation, the authors assessed the overall survival, safety, and hematologic toxicity in metastatic cancer-resistant prostate cancer patients who received taxane therapy following radium 223 completion, using data from the interim analysis of the REASSURE study.


In the REASSURE study, patients were enrolled only if they had histologically or cytologically confirmed metastatic castrate-resistant prostate cancer and were scheduled to receive radium 223 by their treating physician. Patients previously treated with radium 223 or who were scheduled to receive other radiopharmaceuticals were excluded from the study.

A total of 1465 patients from all over the world were included in the REASSURE safety analysis. 12% (182 patients) of the patients received taxane chemotherapy subsequent to radium 223 therapy, with 73 patients (40%) receiving chemotherapy immediately after and 109 patients (60%) receiving it with a delay after radium 223 completion. The median time from the last dose of radium 223 until beginning chemotherapy was 42.5 (8-90) days for the immediate group and 222 (91-863) days for the delayed group. Patient demographic data are shown in Table one. 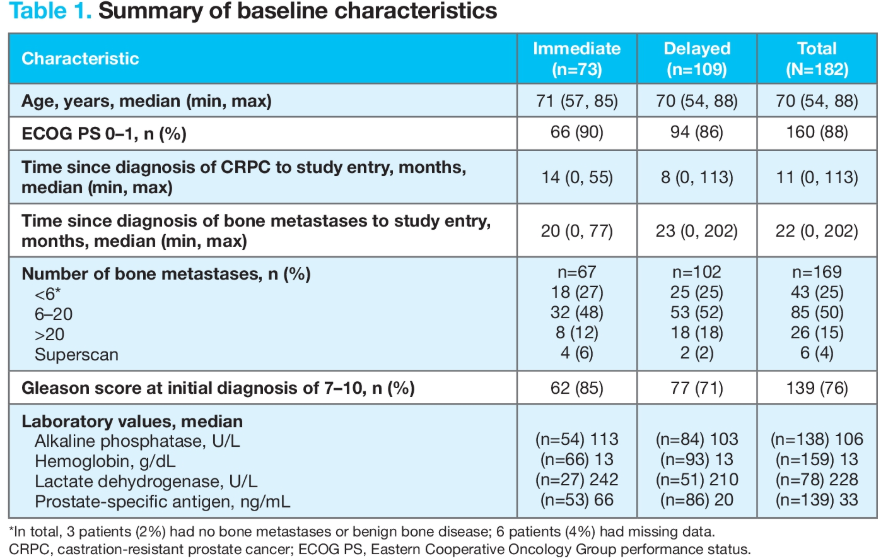 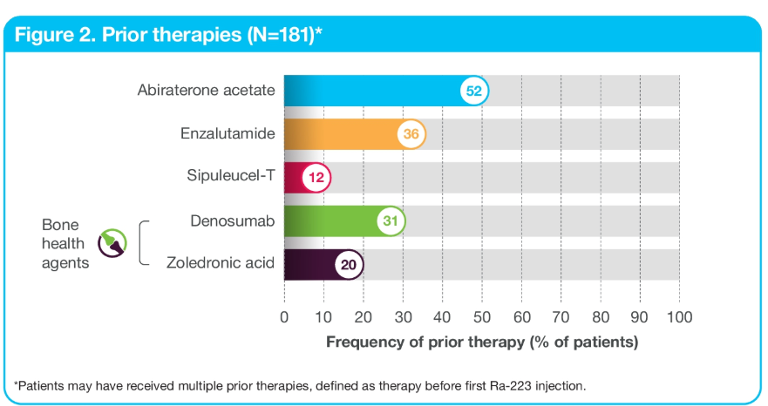 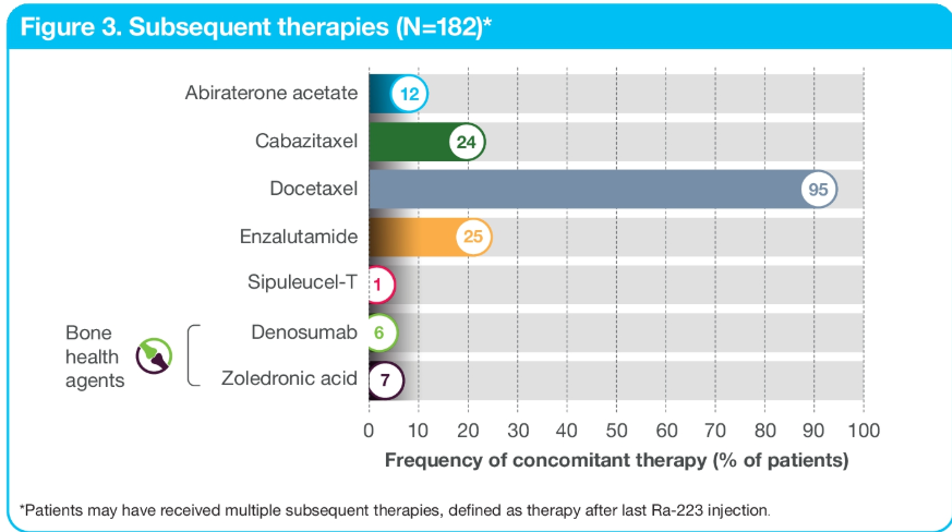 The median overall survival was 24.3 months from initiation of radium 223 treatment and 11.8 months from the start of subsequent chemotherapy, as shown in Figure 5.

The authors concluded their presentation by summarizing the data that showed that many patients received multiple subsequent anti-cancer therapies, including abiraterone in 12% of cases and enzalutamide in 25% of cases. The median overall survival was more than two years from the start of treatment with radium 223 and almost one year from the start of chemotherapy. The study shows that taxane chemotherapy in routine clinical practice given to patients previously treated with radium 223 has an acceptable hematological safety profile, regardless of whether chemotherapy was received immediately or in a delayed manner, following radium 223 therapy. Therefore, the authors conclude that radium 223 is a viable treatment option in patients with bone metastasis with chemotherapy remaining an option given the observed acceptable safety profile. 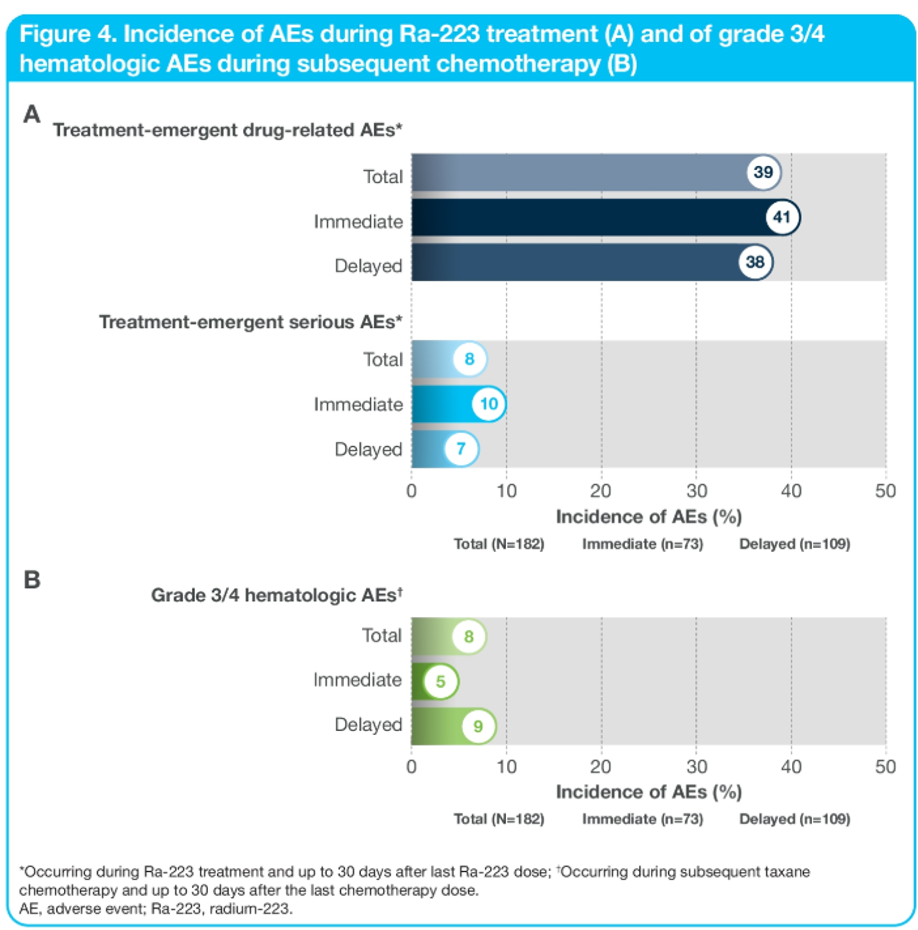 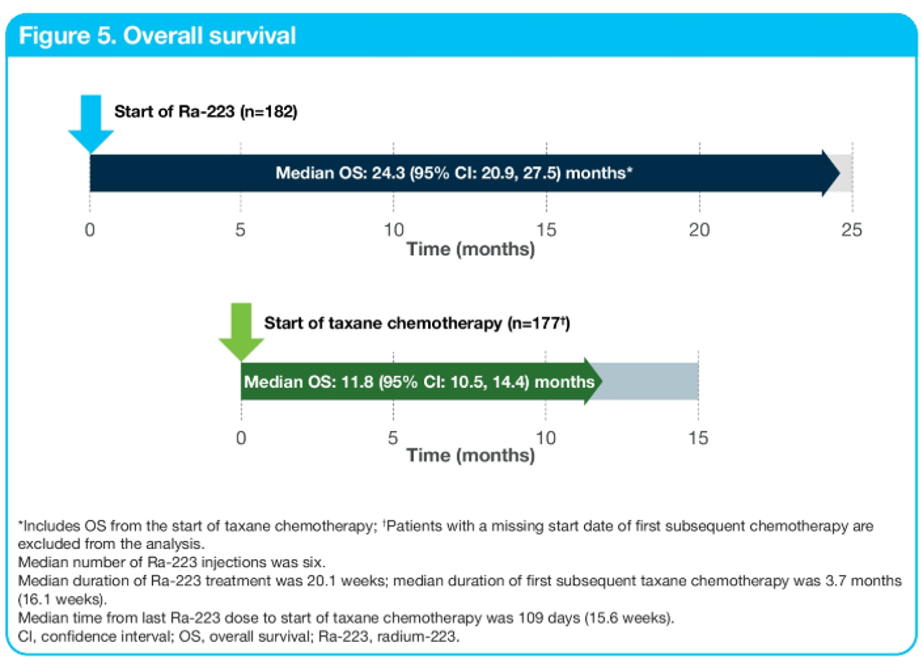