(UroToday.com) KEYNOTE-426 was a large phase III clinical trial that randomly assigned 861 patients with clear cell (renal cell carcinoma) RCC to either pembrolizumab + axitinib (5 mg BID) or sunitinib (50 mg daily x 4 weeks, 6-week cycle). This data, initially presented at GU ASCO 2019, showed that combination pembrolizumab plus axitinib significantly improved overall survival at 1 year (90% vs 78%, HR 0.53) and objective response rates was 59% with pembro/axi compared with 36% with sunitinib. The benefit of pembro/axi was observed across all IMDC risk groups, regardless of PD-L1 expression. This presentation provides updated data from Keynote-426. 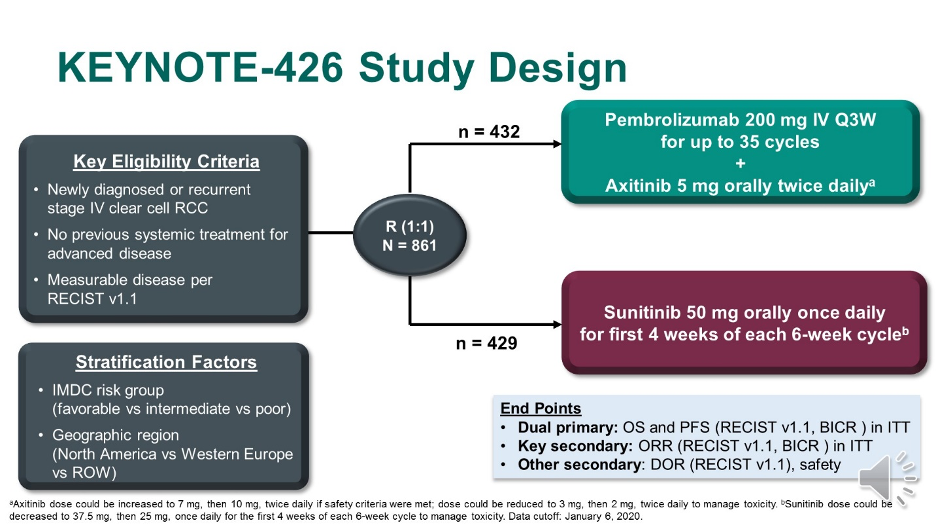 This presentation at ASCO 2020 provides data with a minimum follow up of 23 months on Keynote-426. The study schema is shown above. During the first data cutoff, a minimum of 7 months was required and at that time, the study met both primary endpoints of improving overall survival and PFS. 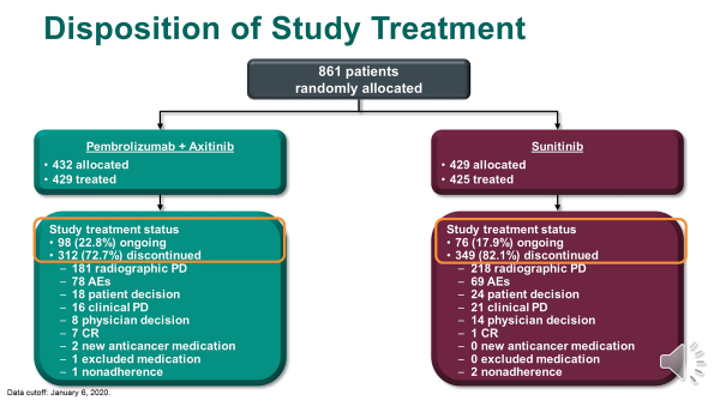 Updated overall survival analysis shows that 74% of patients are alive from the pembro/axi arm at 24 months, compared with 66% of patients on sunitinib arm. Median survival is not yet reached with pembro/axi and was 35.7 months with sunitinib. 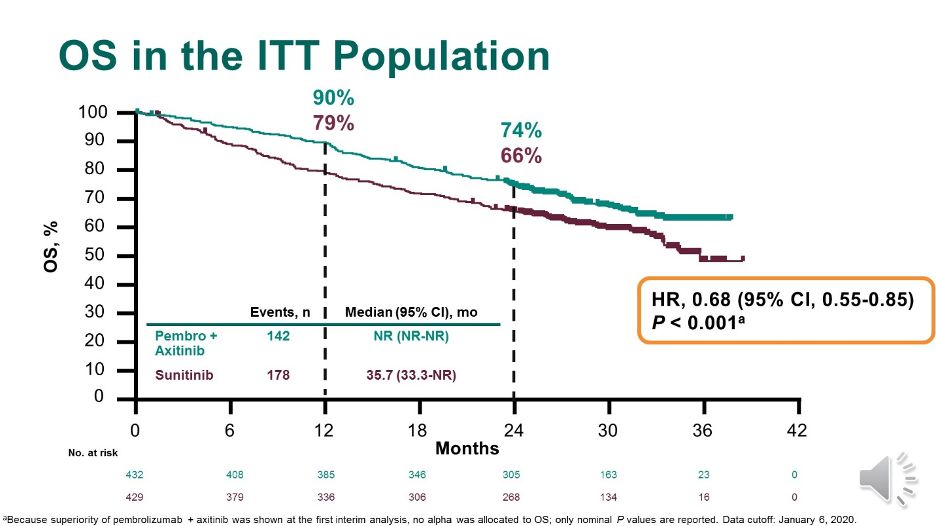 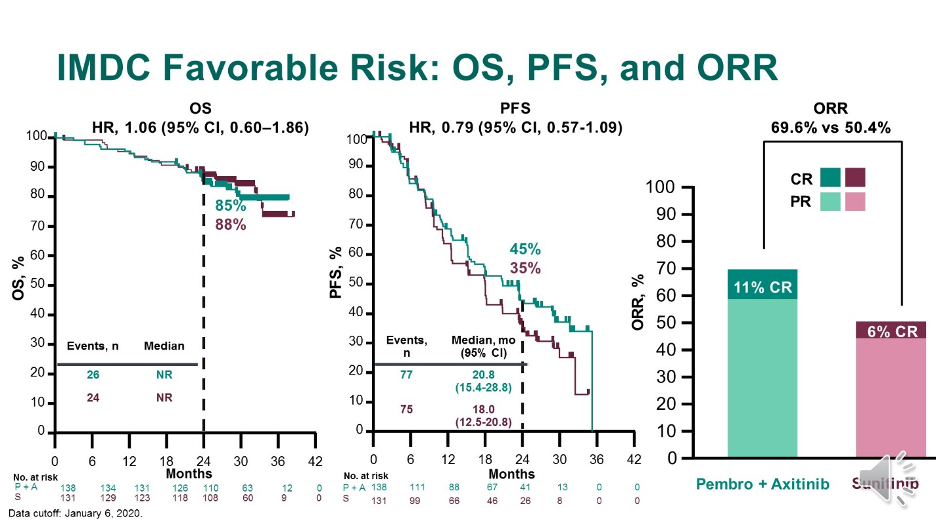 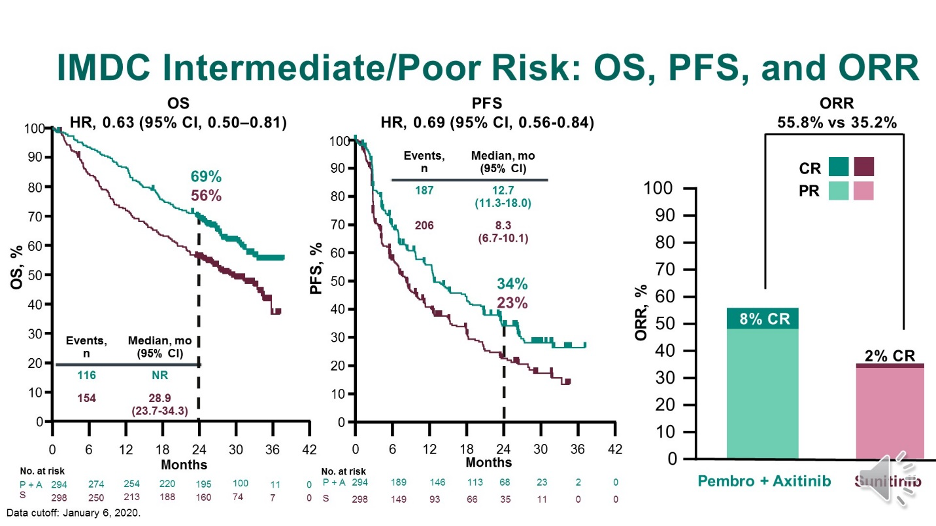 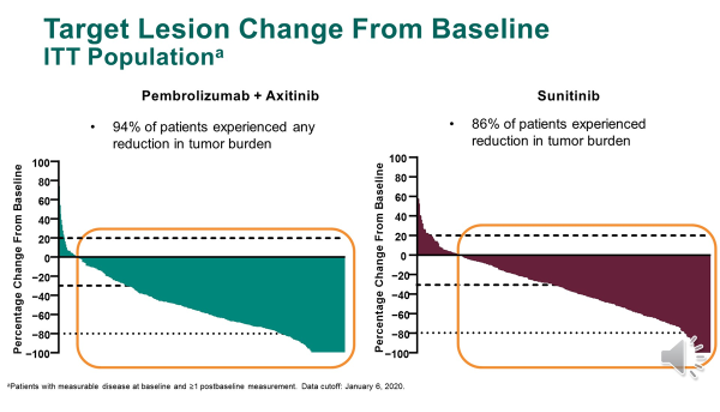 94% of patients on pembro/axi had some reduction in tumor burden compared with 86% of patients on sunitinib. A post-hoc depth of response and overall survival analysis was completed all patients who were alive at 6 months. Patients were divided in subgroups based on tumor reduction in size. For patients with a complete response in either arm, there were very few deaths in the following 42 months. However, for patients with near CR, 80% to almost 100% shrinkage, patients on pembro-axitinib continued to do almost just as well as the CR arm, whereas patients receiving sunitinib did less well with an OS between 70-80%.

These data presented today continue to show that pembro/axi is superior to sunitinib for most patients with mRCC and landmark analyses show that the depth of tumor shrinkage correlates with overall survival. It will be interesting to follow the OS and PFS curves for patients in the IMDC favorable risk category to see if they separate out any further with longer follow up.