(UroToday.com) Patients with nonmuscle-invasive bladder cancer are at high risk of recurrence and progression. In particular, patients with high-grade disease and those with carcinoma in situ (CIS) are at notably elevated risk. As a result, both the European Association of Urology and the American Urological Association/Society of Urologic Oncology guidelines on nonmuscle-invasive bladder cancer (NMIBC) recommend adjuvant treatment, typically with intravesical Bacillus Calmette-Guérin (BCG), in a risk-adapted fashion for these patients. While the use of BCG is well established and guideline-recommended, many patients either fail to initially respond or fail to maintain response to this approach. Treatment options for patients with BCG unresponsive or refractory disease are much less clear but include radical cystectomy, further intra-vesical therapy including intravesical chemotherapy, systemic therapy, and clinical trials. It is only recently, following the presentation of the KEYNOTE-057 trial, that systemic pembrolizumab became FDA approved for this indication.

Atezolizumab is another checkpoint inhibitor with demonstrated activity in metastatic bladder cancer. In the Genitourinary Cancer—Kidney and Bladder Poster Session at the 2020 American Society of Clinical Oncology Virtual Annual Meeting, Peter Black, MD, and colleagues presented the results of the SWOG S1605 trial assessing the efficacy of this agent in patients with BCG-unresponsive high-risk NMIBC.

SWOG S1605 is a single-arm, Phase II registration trial which sought to enroll 135 patients (70 with CIS and 65 with non-CIS histology) with histologically proven BCG-unresponsive high-risk NMIBC who were unfit for or declined radical cystectomy. Enrolled patients received systemic atezolizumab (1200 mg IV) every three weeks for one year. The primary outcome was the pathological complete response (CR) rate at six months as defined by mandatory biopsy. The authors designed the study with a null hypothesis of 30% and an alternative of 50% with a 1-sided alpha = 0.05 and 96% power. The three month CR rate defined by cytology, cystoscopy, and for-cause biopsy, is a key secondary endpoint, in addition to safety. 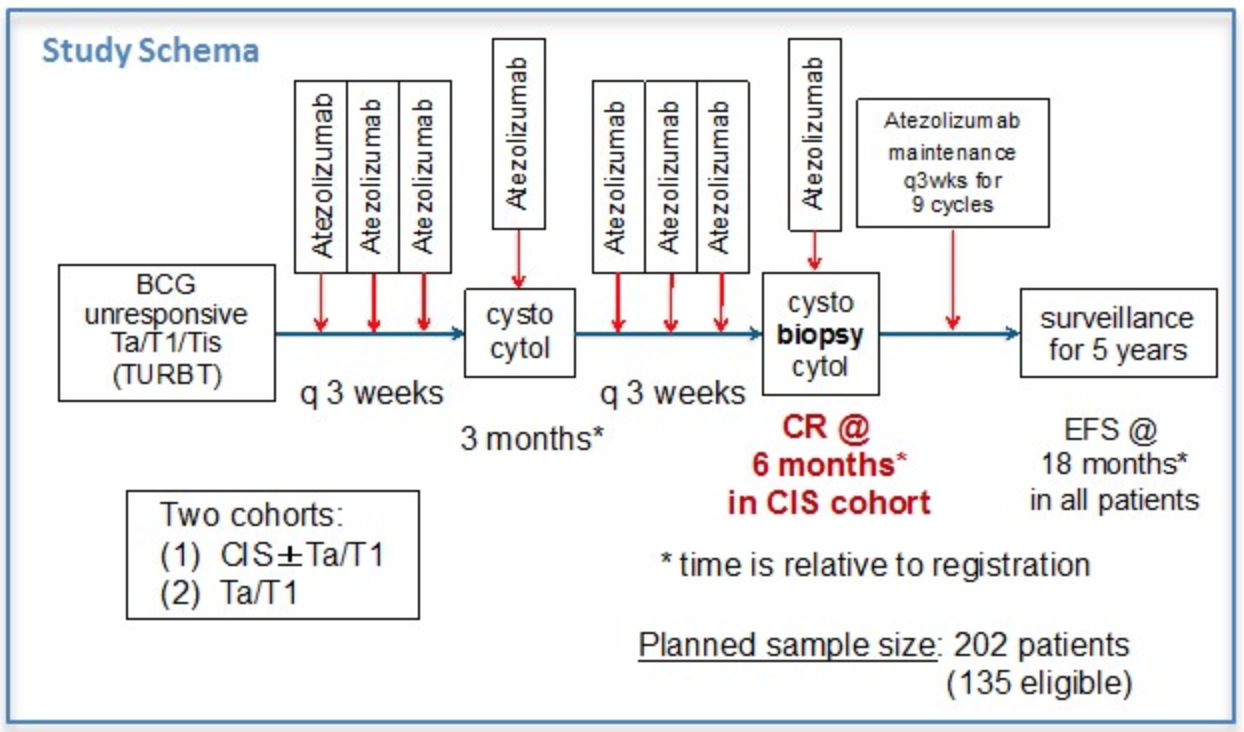 In the presentation at the 2020 ASCO Virtual Annual Meeting, Dr. Black reported the results of a subset of patients with CIS (with or without concomitant Ta/T1) who received at least one protocol treatment. This represents 75 eligible patients. Of these, two did not receive therapy and were therefore not included in the analytic cohort.

The median age of the included patients was 73 and the median number of BCG doses was 12. In addition to CIS, 14 patients had Ta disease and 16 had T1 disease (30 patients, 41% with non-CIS concomitant histology). 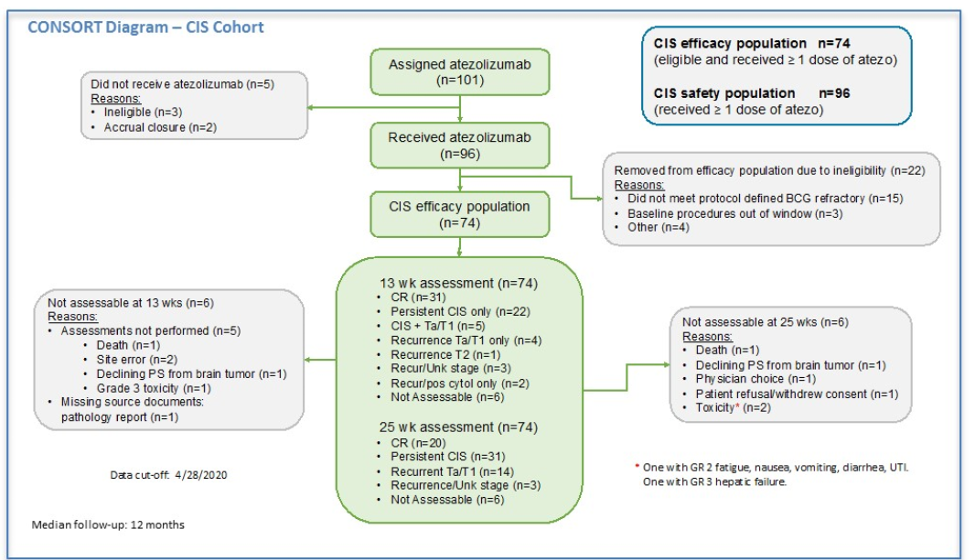 It was concluded that atezolizumab shows similar efficacy to pembrolizumab in this population, meeting the benchmark for initial CR defined by the FDA guidance. Ongoing assessment of the duration of response will be important in guiding the utilization of this approach.