Chicago, IL (UroToday.com) According to the American Urological Association (AUA), biochemical recurrence after prostatectomy is defined as a confirmed prostate-specific antigen (PSA) rise ≥0.2 ng/mL. Biochemical recurrence is common, occurring in 20-40% of patients after definitive local therapy. However, the majority of these patients do not develop metastases, especially those patients with low-risk features.1  In a series of 450 patients who received radical prostatectomy and no adjuvant or salvage therapy, 30% of patients developed metastases and the median metastasis-free survival was 10 years. However, for patients with high-risk features, such as a Gleason score of 8-10, or short PSA doubling times, median metastasis-free survival can be as low as 1 year.1 This study examines the efficacy of olaparib (without androgen deprivation therapy (ADT)) in men with biochemically-recurrent prostate cancer after prostatectomy.

This abstract provides data on 20 men with biochemically recurrent prostate cancer with a PSA doubling time (PSADT) of less than six months, with a PSA greater than 1 ng/mL and testosterone greater than 150 ng/dL. Inclusion and exclusion criteria are included below: 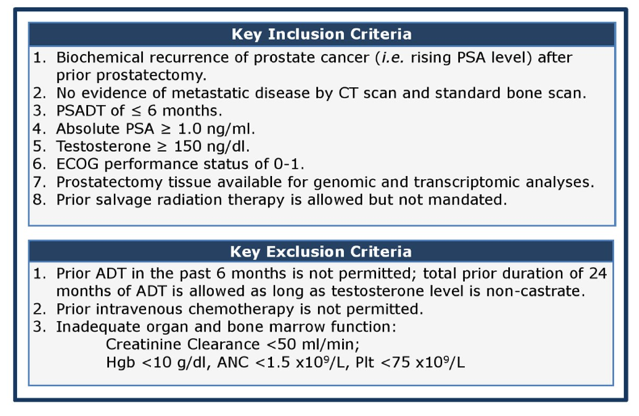 Patients received olaparib 300 mg twice a day notably without any ADT, until their prostate-specific antigen (PSA) doubled or they had evidence of metastatic disease. The primary endpoint was a confirmed PSA50. Of note, there was no biomarker-based pre-selection of patients but correlative studies were conducted including analysis of somatic DNA, RNA expression, and IHC for DNA damage markers. Baseline characteristics are shown below: 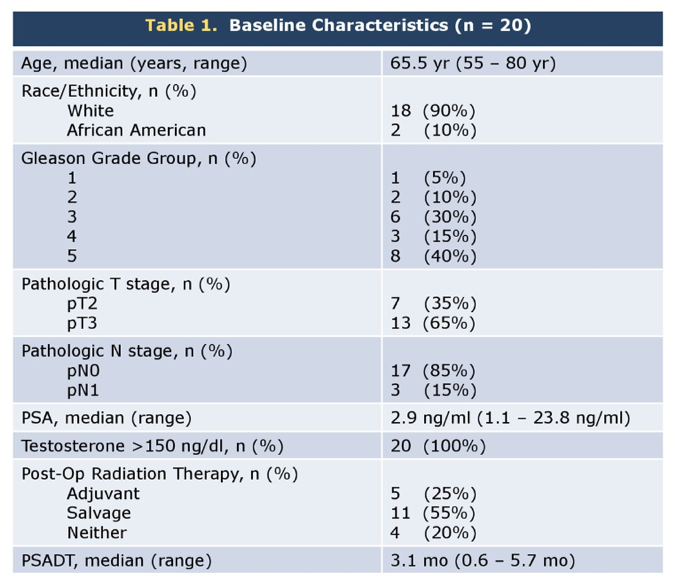 In this cohort of patients, the median PSADT was 3.1 months and 55% of patients had a Gleason of 8 or higher. 35% of men had a BRCA2 or ATM variant. Three men had a PSA50, all of whom had a BRCA2 mutation. Four other men had PSA declines. The median PSA PFS was greater in men with BRCA2/ATM mutations compared to those without.

The most common toxicities of olaparib included fatigue, nausea, anemia, and leukopenia and two patients required dose reductions due to toxicity.

Timing and duration of treatment of men with biochemically recurrent prostate cancer are controversial. Patients at high risk for metastatic progression includes the patients included in this study - those with high Gleason scores and those with low PSADTs. Currently, the standard of care includes either continuous or intermittent ADT.2 However, as this study shows, there may be a subset of patients (those with DNA damage repair defects) who may respond to PARP inhibition. However, this appears to trade the toxicity of ADT (hot flashes, fatigue, loss of libido) for the toxicities of PARP inhibition (myelosuppression). Of note, one rare side effect of PARP inhibition is treatment-related AML and this factor should be considered if patients are to be placed on continuous PARP inhibition for biochemically recurrent prostate cancer.3