Chicago, IL (UroToday.com) The phosphoinositide 3-kinase (PI3K)/mTOR signaling pathway is frequently activated in solid and hematologic malignancies. Previously, a phase I study of the novel and potent PI3K/mTOR dual kinase inhibitor LY3023414 (LY) exhibited a favorable safety profile.1 Abiraterone and enzalutamide are approved for metastatic CRPC (mCRPC) and the activity of enzalutamide after abiraterone showed a radiographic progression-free survival (rPFS) of ~4 months in all patients and 6 months in those with ≥6 months of prior abiraterone.2 The combined inhibition of the androgen receptor and PI3K/mTOR may result in improved clinical benefit for men with mCRPC. Christopher Sweeney, MD, and colleagues presented results of a double-blind, placebo-controlled, randomized Phase 1b/2 study of LY with or without enzalutamide (a dual PI3K/mTOR inhibitor) in patients with mCRPC who progressed on abiraterone.

The phase 1b patients received single-agent LY 200 mg twice daily (BID) for 1 week prior to starting LY plus enzalutamide. Phase 2 patients were randomized 1:1 to 160 mg daily enzalutamide with placebo or 200 mg BID LY on a 28-day cycle. The primary objective was PSA progression-free survival (PFS: serological, radiographic [rPFS], or death) by PCWG2 criteria. Secondary objectives were rPFS, safety, decline in PSA, and pharmacokinetics. Exploratory biomarker analyses included outcomes by the presence of androgen receptor variant 7 (AR-V7). Ninety-two primary PFS events were needed for the study to have at least 80% power at one-sided alpha=0.20. The schema for the study is as follows: 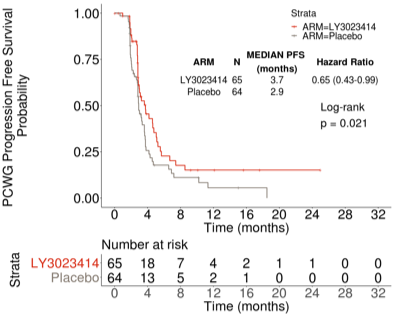 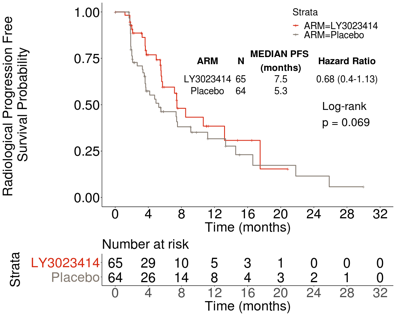 Several conclusions can be drawn from this study: