Chicago, IL (UroToday.com) The landscape of systemic therapy for metastatic renal cell carcinoma (mRCC) is rapidly changing. Beyond the addition of immune checkpoint inhibitor combinations (nivo/ipi), additional TKI’s (cabozantinib), there are now combination therapies that are demonstrating excellent responses rates in the first line. The recent data from KEYNOTE‑426 has led to the approval of axitinib/pembrolizumab in the first line for mRCC, and as can be expected from this combination, seems to have efficacy for good, intermediate and poor risk patients.

Certain histologic features are associated with worse clinical outcomes. In particular, patients with sarcomatoid or rhabdoid (S/R) RCC histology have a poor prognosis and suboptimal outcomes. Historically, targeted therapies have been less effective for these tumors, but emerging data suggest that immune checkpoint inhibitors (ICIs) may be effective.

In this study, the aim of the authors was to characterize the genomic alterations (GA) in S/R mRCC tumors and then evaluate their response to ICIs. They did so by retrospectively comparing the activity of first-line ICIs to non-ICI-based therapies for S/R mRCC patients treated at the Dana Farber Cancer Institute, and then analyzed sequencing data from an NGS panel (275-447 genes) on a subset of these patients (matched by histology to non-S/R mRCC).

For S/R mRCC patients treated with ICI vs non-ICI therapies, overall survival (OS) and time to treatment failure (TTF) were compared by Cox regression and objective response rate (ORR) by logistic regression. GA frequencies were compared by Fisher’s test and tumor mutational burden (TMB) by Mann Whitney U between S/R and non-S/R mRCC. Results were considered statistically significant if p < 0.05 or q < 0.10.

Moving to the results, they identified 203 S/R mRCC patients at the Dana Farber Cancer Institute and also abstracted data from 927 patients with metastatic sarcomatoid RCC from the IMDC dataset. In both cohorts, patients were treated between 2002 and 2018.

Flow diagram of patients identified in the Dana Farber Cancer Institute and the IMDC is seen below:

For the clinical study component, 203 DFCI patients (79 ICI, 124 non-ICI) were identified, while in the IMDC, 927 patients were identified (89 ICI treated, 838 non-ICI). For the genomic analysis, 479 RCC patients were profiled at the DFCA, resulting in 79 S/R RCC and 395 non-S/R RCC with same background histology (matched).

Full demographics are seen below for the clinical cohort: 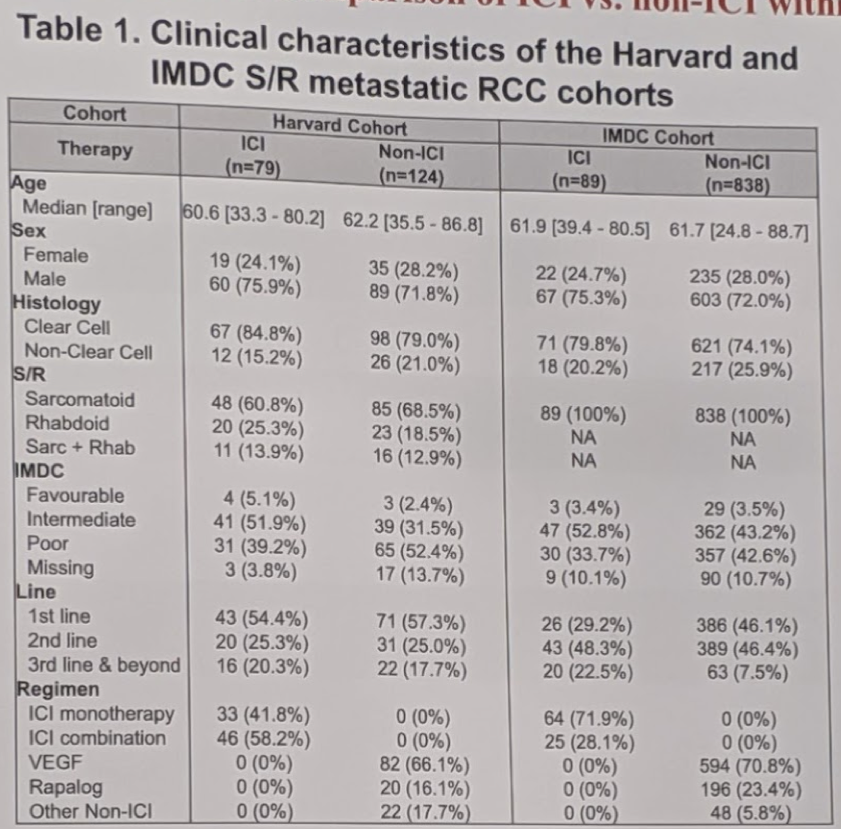 Patients primarily had sarcomatoid histology overlying a clear cell RCC background. Most of the S/R patients treated with ICI were an intermediate risk, while non-ICI were a poor risk. Most were treated in the first line setting at DFCA, but in the second line in the IMDC cohort.

Response rates are seen below:

This translated to significantly improved overall and time to treatment failure in both cohorts: 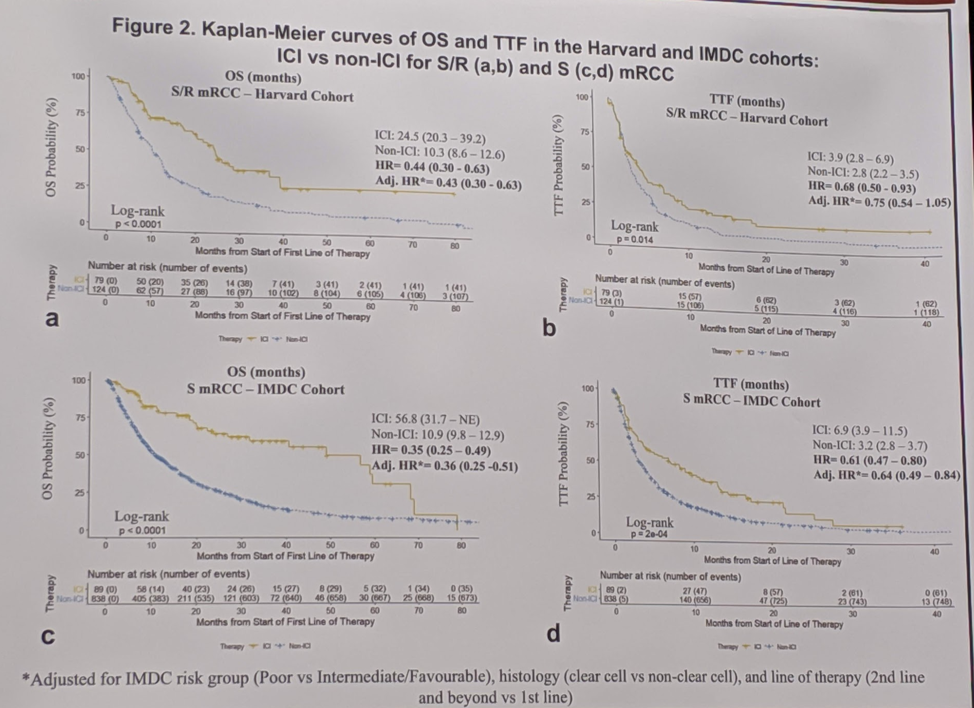 In particular, the overall survival curve separation was significant.

In terms of genomic alterations, overall tumor mutation burden (TMB) was noted to be similar between the S/R RCC and non-S/R RCC cohorts (7.2 vs. 6.3, p = 0.08). Genomic alterations in BAP1, NF2, TP53, and SETD2 were found to be significantly more frequent in S/R RCC patients. Full GA analysis is seen below: 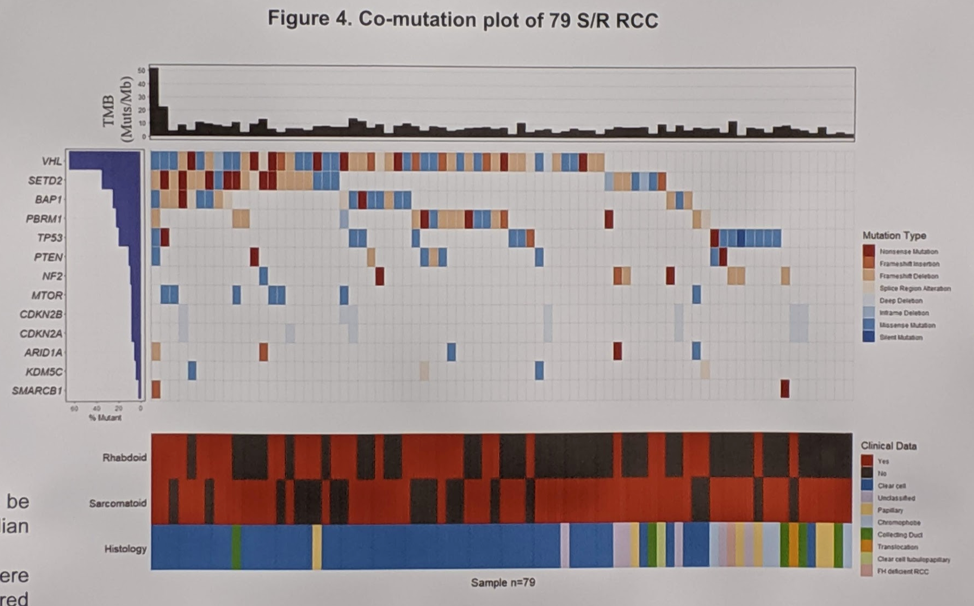 As seen in these retrospective results, it seems that patients with S/R mRCC have a higher frequency of BAP1 GA and better outcomes on ICIs compared to non-ICI-based therapies. They emphasize that future studies should determine the molecular mechanisms underlying the improved response to ICIs in S/R mRCC.