(UroToday.com) In the session of the 2022 Advanced Prostate Cancer Consensus Conference focusing on the treatment of patients with metastatic castration-resistant prostate cancer (mCRPC), Dr. Padhani discussed imaging-based treatment monitoring in prostate cancer. He noted that, in part due to heterogenous outcomes in mCRPC, there are multiple prognostic determinants which must be considered, including clinical factors (comorbidity, performance status, presentation, and progression of the natural history of disease), histopathology, laboratory investigations, and imaging results. In terms of imaging phenotype, he highlighted the importance of considering organ distribution of disease, bony phenotype (lytic versus sclerotic), volume of disease, relative volume of avid disease, and response to prior therapy.

He noted that, defined based on conventional imaging with bone scan and computed tomography, the distribution of disease is significantly associated with overall survival among patients treated with docetaxel: those with lymph node only disease fair most favourably while those with liver metastases have the worst prognosis. Further, again using these imaging modalities, “counting” numbers of lesions is prognostic.

However, he emphasized that rather than simply counting numbers of lesions, it is more appropriate to assess the volume of disease. This may be accomplished using either PSMA-PET or whole body MRI. Again, operationalized in a variety of ways (including dichotomized), this is prognostic of outcome. Focusing on patients receiving lutetium-PSMA, he demonstrated that there is a prognostic gradation based on PSMA tumor volume.

In the context of caring for patients with mCRPC, he emphasized that this imaging based treatment response can allow early identification of patients with clonal resistance to therapy. This may allow for an early switch in therapy. He noted that currently a “triple assessment” including clinical status, imaging assessment, and biochemistry (PSA dynamics). Utilizing conventional imaging, he highlighted that there are considerable caveats for each of these. Thus, there remains a considerable unmet clinical need. 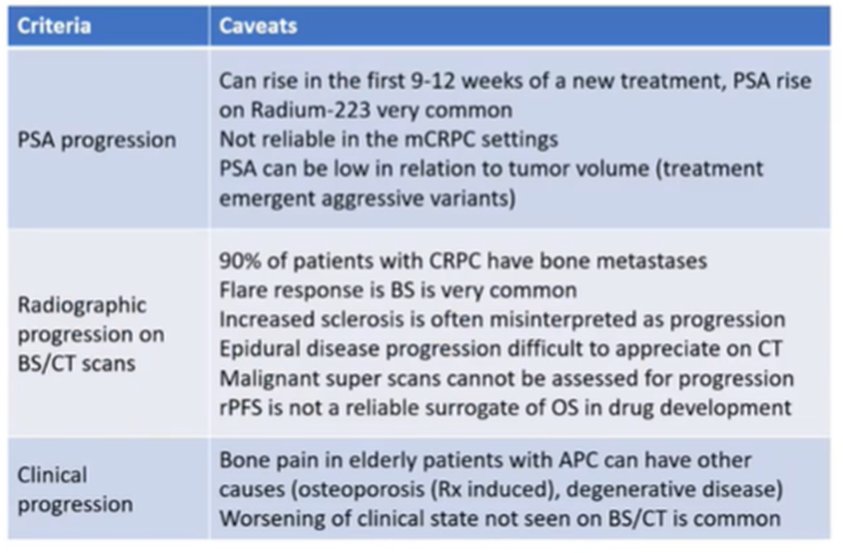 He emphasized that rPFS, as defined based on conventional imaging, is not a reliable surrogate for overall survival and that it needs adaption by disease state, patient population, imaging modality, and treatment approach. Considering first bone scan, he emphasized that the imaging approach does not image tumor in the bone. Instead, it images the bone’s response to the presence of cancer. Further, in his estimation, bone scan is unable to distinguish rapidly between progression and pseudoprogression, there is a high frequency of clinical progression in the absence of bone scan changes, and that diffuse disease or single lesion enlargement cannot be assessed.

He then noted that, in terms of assessing bony disease, computed tomography is limited by an inability of RECIST criteria to assess bony disease, by the fact that progression cannot always been seen, and that sclerotic progression and sclerotic response may be difficult to distinguish.

Using a clinical example, he highlighted that there may be clinical progression (including with rising PSA levels) in the absence of changes on CT or bone scan. 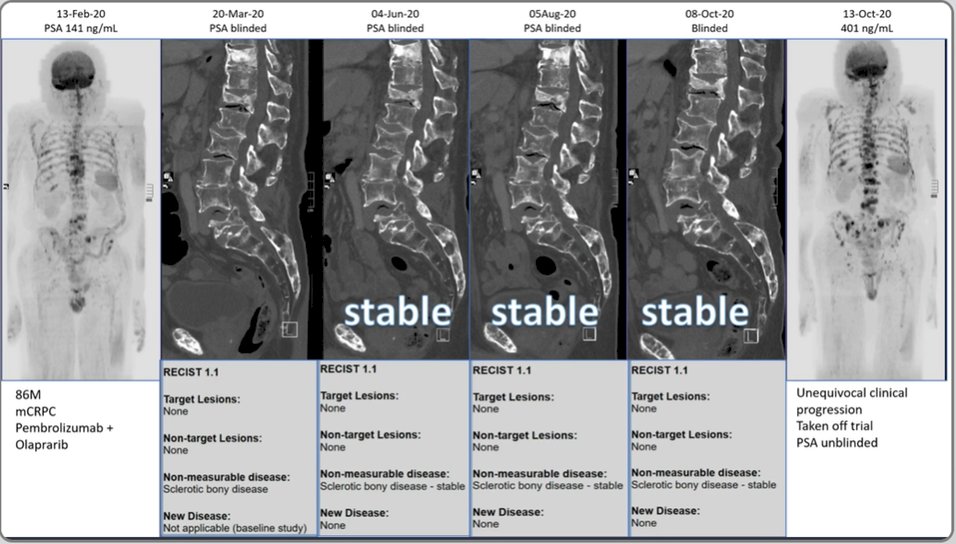 Given these challenges with conventional imaging, there is interest in identifying better imaging strategies to inform the care of patients with mCRPC. These next generation imaging approaches have much improved spatial resolution, and have allowed direct morphologic and functional assessment of bone marrow disease activity. As a result, next generation imaging allows a more precise assessment of disease extent, potential complications, and therapy response. Additionally, viability habitat maps can allow assessment of spatial heterogeneity in cellular viability. 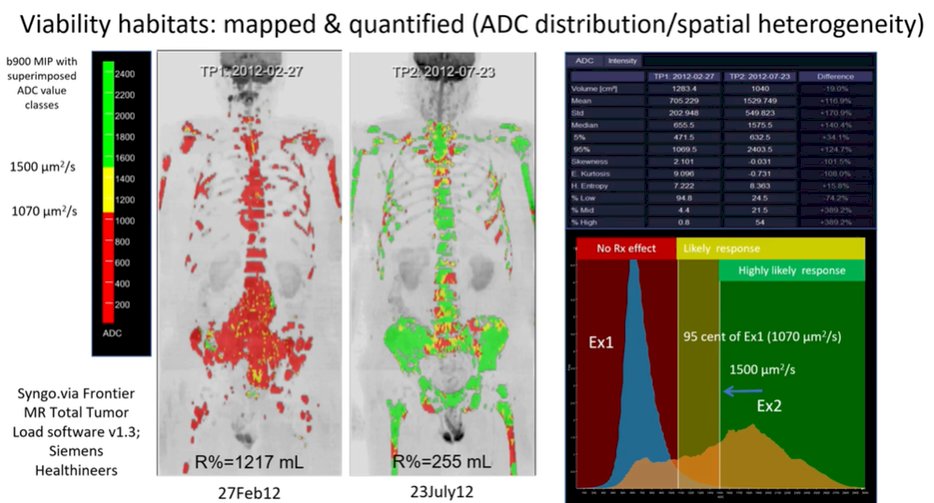 In parallel to other approaches, such as PI-RADS, the METS-RAD-P response assessment categorization allows for an objective quantification of disease response to therapy using whole body magnetic resonance imaging. In using objective criteria, METS-RAD-P allows for high levels of interobserver agreement in the assessment of patients with advanced prostate cancer, across many tumor locations including bone and soft tissue.

The RESPECT study provided a prospective, non-inferiority assessment of anticancer therapies in mCRPC with bony disease comparing whole body magnetic resonance imaging with conventional imaging using bone scan and computed tomography. While this study is ongoing, more than 80% of men progressing in bone based on MRI were not detected on bone scan. A similar phenomenon has also been observed in advanced breast cancer, where the proportion was approximately 50%. Thus, he emphasized that conventional imaging may be stable despite definitive biochemical evidence of progression.

However, citing recent data examining the role of screening MRI, he emphasized the important lesson this trial provided that an imaging-induced change in treatment does not necessarily translate to clinical benefit for patients. However, imaging based progression (in one example using serial quantitative PSMA-PET) is predictive of overall survival. This principle has now been more formally enumerated in the recent Response Evaluation Criteria in PSMA-PET/CT (RECIP) which demonstrated that tumor volume change and the development of new lesions on PSMA-PET/CT are prognostic for overall survival.

Dr. Padhani noted that recommendations regarding sequential imaging for the monitoring of treatment in mCRPC have evolved over time with an increasingly large role for next generation imaging.

In conclusion, he noted that discordance between clinical and imaging assessment for disease progression are common. Thus, vigilance is needed for regular, protocol-based assessment. The management implications and survival effects of using next generation imaging have yet to be established in the context of treatment monitoring. Thus, prospective trials remain important.