With regards to docetaxel in high-risk non-metastatic prostate cancer, Vale et al.2 performed a systematic review that did not show a survival benefit with the addition of docetaxel (HR 0.87, p = 0.218), but did show a benefit of docetaxel for failure-free survival (HR 0.70, p < 0.0001), with an absolute reduction of 4-year failure rates of 8%. Looking at data from the original STAMPEDE trial for patients with N+M0 disease,3 the addition of abiraterone to ADT improved overall survival with a hazard ratio of 0.75, but with a non-significant 95% CI of 0.48-1.18. 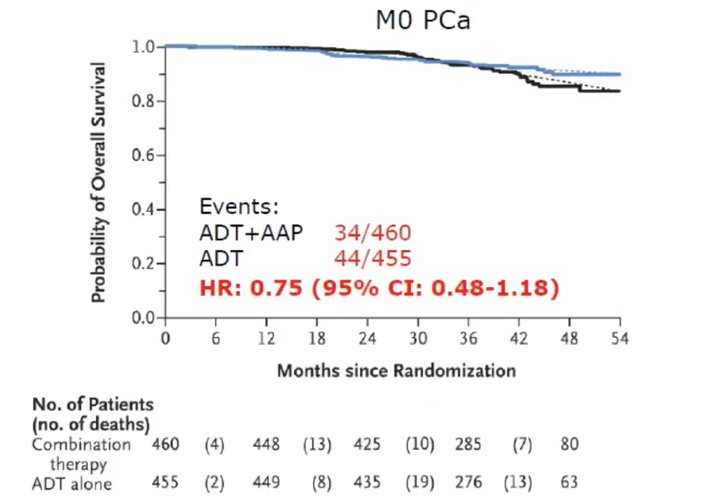 Dr. Poon then discussed the recently published PEACE-1 trial [4], which assessed new data from two randomized controlled phase 3 trials done in the multi-arm, multistage STAMPEDE platform protocol to assess the efficacy of adding abiraterone and prednisolone alone or with enzalutamide to ADT in this patient population. Local radiotherapy (as per local guidelines, 74 Gy in 37 fractions to the prostate and seminal vesicles or the equivalent using hypofractionated schedules) was mandated for node negative and encouraged for node positive disease. There were 1,974 patients randomized, including 39% of patients being N1, and 71% of these patients planned for local radiotherapy. With median follow-up of 72 months (IQR 60–84), metastasis-free survival was significantly longer in the combination-therapy groups (median not reached, IQR not evaluable [NE]–NE) than in the control groups (not reached, 97–NE; HR 0.53, 95% CI 0.44–0.64, p<0.0001). The 6-year metastasis-free survival was 82% (95% CI 79–85) in the combination-therapy group and 69% (66–72) in the control group. Overall survival (median not reached [IQR NE–NE] in the combination-therapy groups vs not reached [103–NE] in the control groups; HR 0.60, 95% CI 0.48–0.73, p<0.0001).

Additional AR agents are also being tested in the high-risk non-metastatic localized prostate cancer disease space including ATLAS (apalutamide in high-risk, localized, or locally advanced prostate cancer patients receiving primary radiotherapy), ENZARAD (enzalutamide in ADT with radiotherapy for high-risk, clinically localized prostate cancer) and NRG GU009 (testing abiraterone + apalutamide). In the perioperative space, unfortunately, the CALGB 90203 study testing neoadjuvant docetaxel and hormonal therapy versus prostatectomy alone was a negative study for the primary endpoint of biochemical PFS. However, we eagerly await the results of the PROTEUS study, which is nearing the end of recruitment. This study is testing neoadjuvant apalutamide + ADT followed by radical prostatectomy versus placebo + ADT followed by radical prostatectomy in patients with localized or locally advanced high-risk/very high-risk prostate cancer.

Finally, Dr. Poon discussed the proPSMA study [5], which demonstrated a detection rate of 20-23% in the staging of high-risk disease:

As has been mentioned several times throughout the meeting, we await the long-term results of these studies to assess if there is a clinical benefit to these improved detection rates.

Dr. Poon concluded his presentation on the management of cN1 prostate cancer with the following take-home messages: