(UroToday.com) The third and final session of the Advanced Prostate Cancer Consensus Conference 2021 which was hosted virtually in the context of the COVID-19 pandemic focused on molecular characterization of both tissue and blood, with a focus on implications for treatment with PARP inhibitors and beyond. In the final talk of this session, Dr. Eric Small discussed the role of both novel and proven treatment options in advanced prostate cancer and how we may best utilize these in treatment sequencing.

To contextualize treatments to include, he considered the evolution of prostate cancer treatment approaches, with an emphasis on later stage (phase II or III) data and those agents with strong evidence of clinical activity that are either in clinical use currently or with a reasonable probability of reaching this stage soon.

First, he focused based on known genetic targets. These include androgen receptor signalling (which has been extensively covered, including in session 1 of this year’s APCCC), DNA damage repair (which has been previously discussed in this session), the PTEN/PI3K/AKT pathway, lineage plasticity and neuroendocrine differentiation, and cell cycle regulation. In this talk, he addresses each of these last three.

First, he focused on the PTEN/PI3K/AKT pathway. Aberrations in this pathway are common in advanced prostate cancer, with PTEN deletion found in approximately half of patients with mCRPC. PTEN deletion results in lower androgen receptor transcriptional activity, opening the opportunity for co-targeting. Further, PI3KA, PI3KB, PIK3R1, and AKT1 are amplified or activated in approximately 15% of patients with mCRPC. Early phase I trials of AKT inhibitors suggested activity in patients with mCRPC. Dr. Small then discussed early phase Ib/II data testing the combination of ipatasertib and abiraterone in patients with mCRPC. Given the use of androgen axis targeting with the use of abiraterone, it’s worth noting that a relatively low proportion of patients had received enzalutamide prior to treatment. The authors used four different PTEN assays including immunohistochemistry, FISH, and next generation sequencing. Assessing the primary endpoint of radiographic progression free survival, the authors compared abiraterone alone with abiraterone + two different doses of ipatasertib. Focusing on the 400mg dose of ipatasertib, Dr. Small highlighted that there was a suggestion of a relatively small rPFS benefit but not overall survival benefit among patients independent of PTEN status. However, when molecularly stratified, a larger benefit was observed among those with PTEN loss, regardless of the assay used.

Based on these data, Dr. Small concluded that the old premise that the PTEN pathways is untargetable or undruggable in mCRPC is wrong. Further, co-targeting of PTEN and the AR-pathway appears to be a promising treatment approach in patients with PTEN-deleted mCRPC. Further, while the PTEN assay used effects the proportion of patients who may be eligible for this treatment approach, it doesn’t appear to effect the benefit of this treatment. Thus, while ipatasertib plus abiraterone is not yet ready for clinical use in mCRPC today, it is very promising and, because PTEN loss happens early in prostate cancer, testing of such an approach earlier in the disease process (nmCRPC, mCSPC, or potentially even earlier) is likely appropriate.

Dr. Small then moved to discussing the treatment paradigm for small cell or neuroendocrine prostate cancer. He first highlighted that, in the NCCN guidelines, combination platinum-based chemotherapy is endorsed for these patients. However, he considered the role of platinum in mCRPC in three settings: in unselected patients, in patients with small cell/neuroendocrine features or aggressive variant prostate cancer, and in patients with DNA damage repair deficiencies.

First considering the role of platinum in unselected patients with mCRPC, Dr. Small presented results of the SPARC study. This study was performed prior to the availability of abiraterone or enzalutamide and examined treatment with satraplatin or placebo with prednisone in patients with mCRPC who had progressed following chemotherapy. While there was evidence of a progression-free survival benefit, no overall survival benefit was seen and this treatment approach was not adopted in clinical use. Highlighting a relatively recent systematic review on this topic, Dr. Small concluded that the anti-tumor activity of platinum compounds in advanced prostate cancer is “moderate at best”.

Second, Dr. Small moved to discuss treatment-emergent neuroendocrine (17% of patients with mCRPC in a recent series). This entity is distinct from de novo small cell prostate cancer but is similarly associated with poor survival. Co-existing PS3 or RB1 aberrations are common, and enriched compared to standard adenocarcinoma (83% vs 34%). Unlike classic neuroendocrine prostate cancer, elevated PSA levels may be observed and the androgen receptor expression is retained though activity is lower. Thus, there may be a role for AR co-targeting with platinum and novel androgen axis inhibitors. While a number of novel agents are being tested in these disease space, none are currently approved. 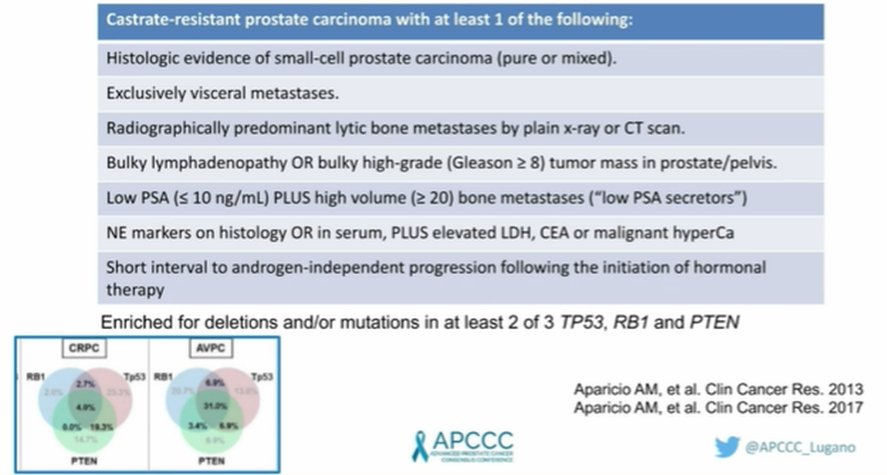 Dr. Small highlighted a recent randomized comparison of cabazitaxel and cabazitaxel + carboplatin in a cohort of patients enriched for (but not restricted to) aggressive variant prostate cancer. While the combined approach improved progression free survival (median 7.3 vs 4.5 months; HR 0.69, p=0.018), no significant difference in overall survival was seen (median 18.5 vs 17.3 months; HR 0.89, p=0.5).

Finally, Dr. Small considered the role of platinum in patients with DNA damage repair deficiency. In these patients, response rates to platinum are high. However, this is the same population in which PARP inhibitors have recently been approved. Further, response rates in subsets of patients to platinum parallel those to PARP inhibitors (BRCA1/2 mutation > other DDR mutations > wild type patients). Dr. Small highlighted that there is no direct comparison between PARP inhibitors and platinum in this disease space. However, in similar circumstances in pancreatic and ovarian cancer, induction platinum therapy is followed by a PARP inhibitor and he suggested that such an approach may be reasonable for patients with prostate cancer as well.

Concluding the discussion of the role of platinum in mCRPC, he emphasized that it is not indicated in unselected patients but may be considered as a first line agent in patients with neuroendocrine features or aggressive variant prostate cancer and could be considered in patients with DNA damage repair deficiency though the comparative role of platinum and PARP inhibitors remains unclear.

Dr. Small then moved on to discuss agents targeting cell cycle regulation. There are a variety of relatively commonly altered targets that may be considered including RB1 (which is lost) and CDK gain. Three CDK inhibitors have been approved in advanced breast cancer and ongoing work assessing their role in prostate cancer in underway. However, for now, this remains not a targetable subtype of prostate cancer.

While not a genomically or molecularly defined subtype, Dr. Small then discussed the role of immunotherapy in advanced prostate cancer. In trial of patients with mCRPC in both the pre-chemotherapy and post-chemotherapy setting, ipilimumab failed to demonstrate benefit in two large randomized controlled trials. He then summarized a number, but not all, other relevant trials of immunotherapy in mCRPC, describing the observed PSA50 rates and ORRs as “fairly modest”.

Thus, for the time being, he considered that there is no clear role for checkpoint inhibitors in mCRPC, apart from patients with evidence of deficiencies in mismatch repair. Given the failure of immunotherapy in the post-chemotherapy setting, he suggested that future work should focus largely on the pre-chemotherapy space and that combination therapy should be preferred given observed higher response rates in KEYNOTE-365 and COSMIC-021.