This website uses cookies to ensure you get the best experience on our website. Privacy Policy
(UroToday.com) In this session, Dr. Himisha Beltran discussed whether molecular markers can inform treatment decisions in mHSPC. She began by highlighting the as yet unmet clinical need for biomarkers to optimally select treatment for men with mHSPC. Specifically, biomarkers could help to select between therapies (ADT plus AR targeted agent versus docetaxel versus triplet therapy), select patients for therapy intensification versus deintensification, and monitor response.

Dr. Beltran began by raising the question of the degree to which biology underlies known prognostic clinical features in mHSPC. It is well-established that de novo (synchronous) mHSPC is a poor prognostic feature relative to relapsed (metachronous) disease. Likewise, men with high-volume mHSPC have significantly worse prognosis relative to those with low-volume disease. She posed the question as to whether these clinical features are due to inherent biologic differences. Are some tumors more “pro-metastatic” from the start? Or are high-volume tumors just caught later? Developing biomarkers that better reflect biology will help elucidate the mHSPC landscape and guide clinical management.

Several studies provide estimates of genomic alterations in mHSPC, which Dr. Beltran summarized. The most common alterations occurred in TMPRSS2-ERG (40-50%), PTEN (40%), and TP53 (25-45%). 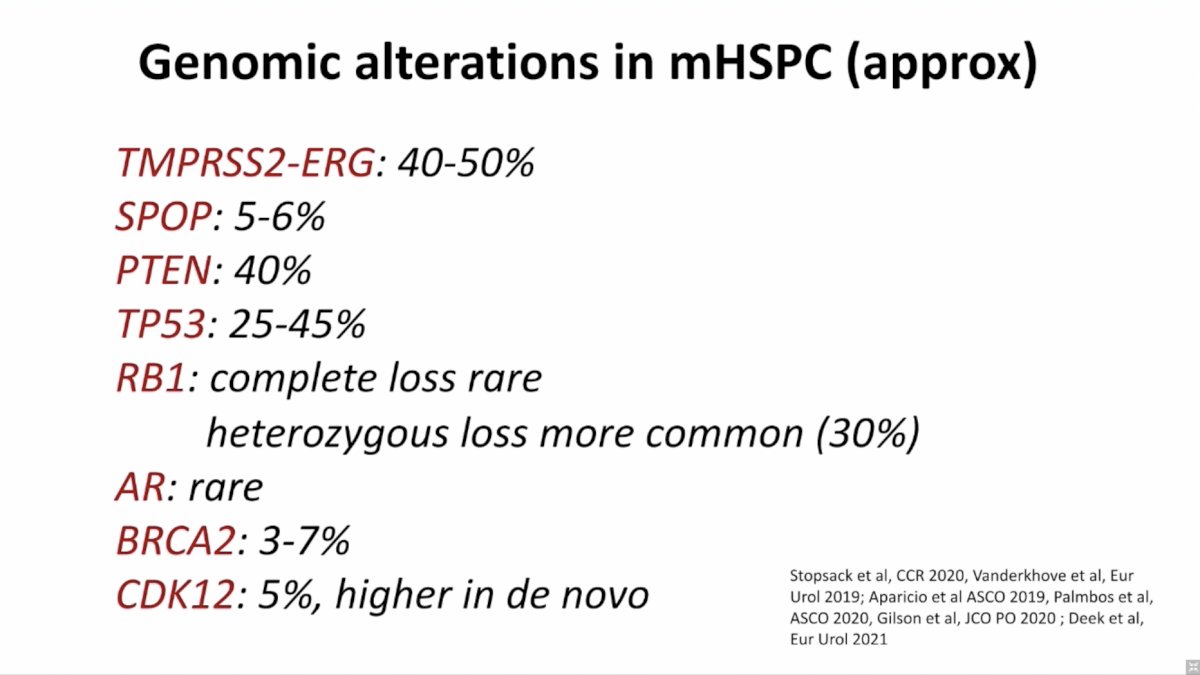 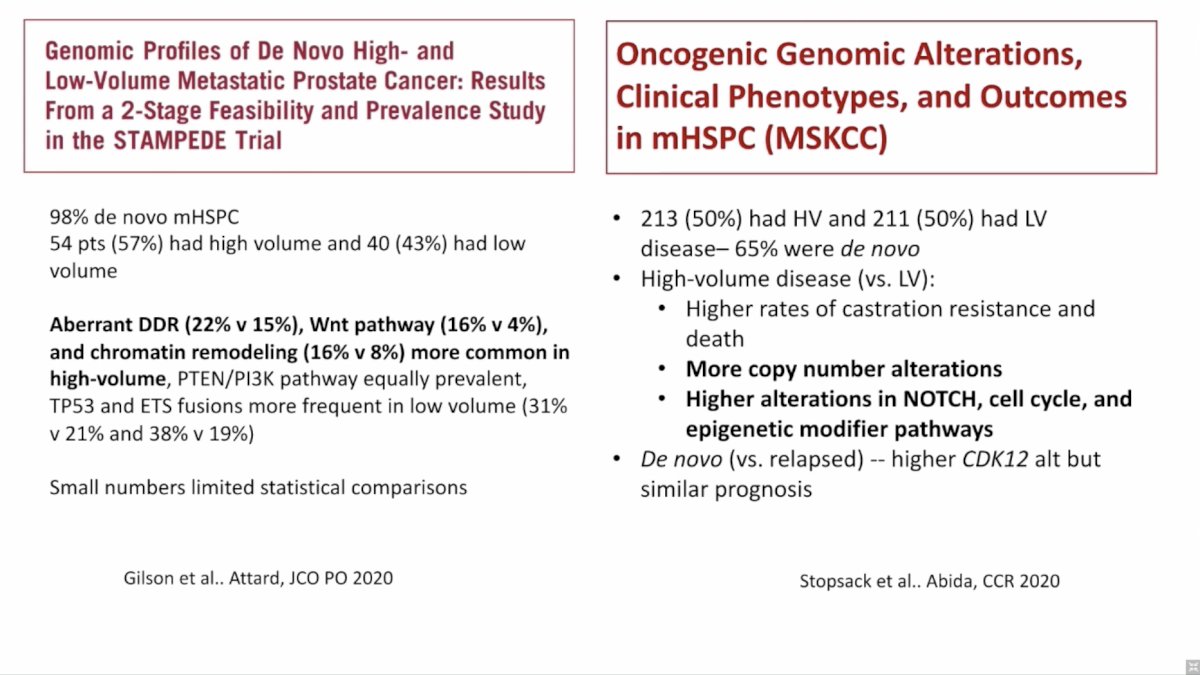 Clinical trials of neoadjuvant therapy prior to radical prostatectomy in clinically localized high-risk prostate cancer provides an opportunity to understand alterations enriched post therapy through paired pre/post-treatment biopsy. For example, in a trial of neoadjuvant ADT plus docetaxel, residual tumors at the time of surgery were enriched for alterations in TP53 and PTEN.[2] Frequency of alterations in these residual tumors reflected those seen in the metastatic setting. 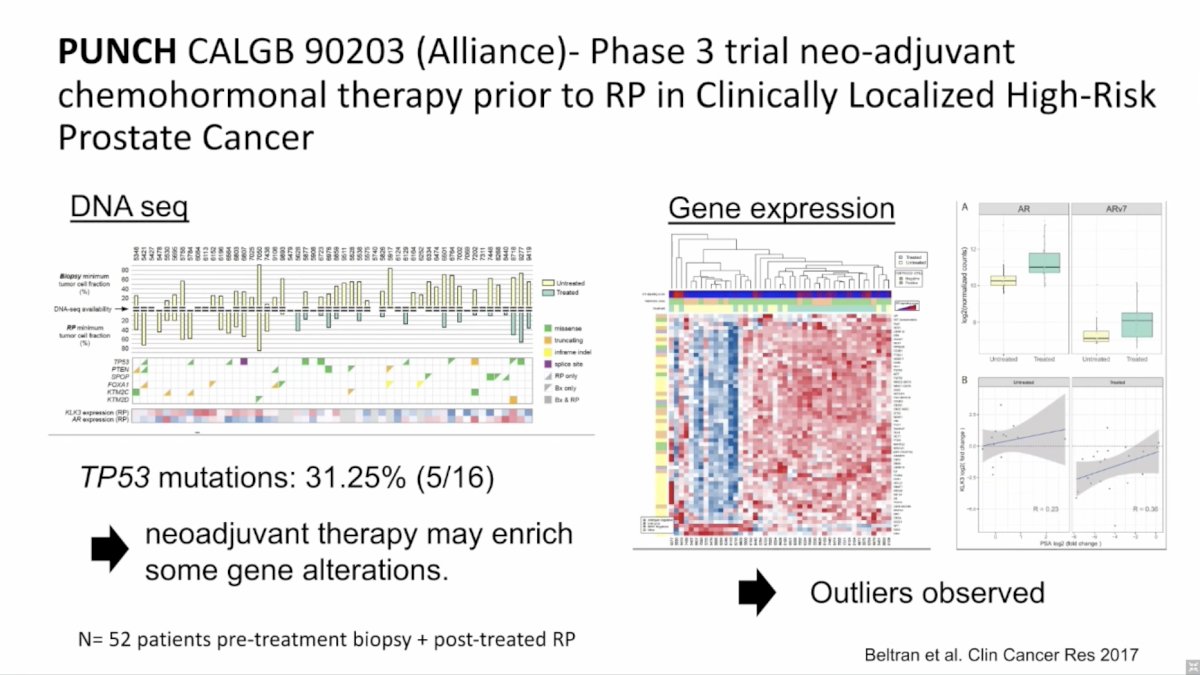 Summarizing available data, Dr. Beltran assigned prognostic impact to certain genomic alteration in mCRPC. SPOP mutations portend good prognosis and better response to AR targeted agents. CDK12 imparts a poor prognosis. Likewise, loss of tumor suppressor genes (RB1, TP53, PTEN) is bad and compound loss (more than one) is worse. Combined loss of RB1 and TP53 has been shown to lead to AR independence and lineage plasticity. While TP53 and PTEN can be early events that are selected for given the fitness they impart, RB1 alterations are often acquired.

Several studies have correlated gene expression profiles with clinical outcomes. The most robust finding is the predictive and prognostic associations of luminal versus basal signatures. Compared to the basal subtype, luminal subtype is associated with greater benefit from docetaxel in the mHSPC setting and greater benefit from AR targeted agents in the non-metastatic and metastatic CRPC setting. This raises the question of how do we best target the basal subtype? 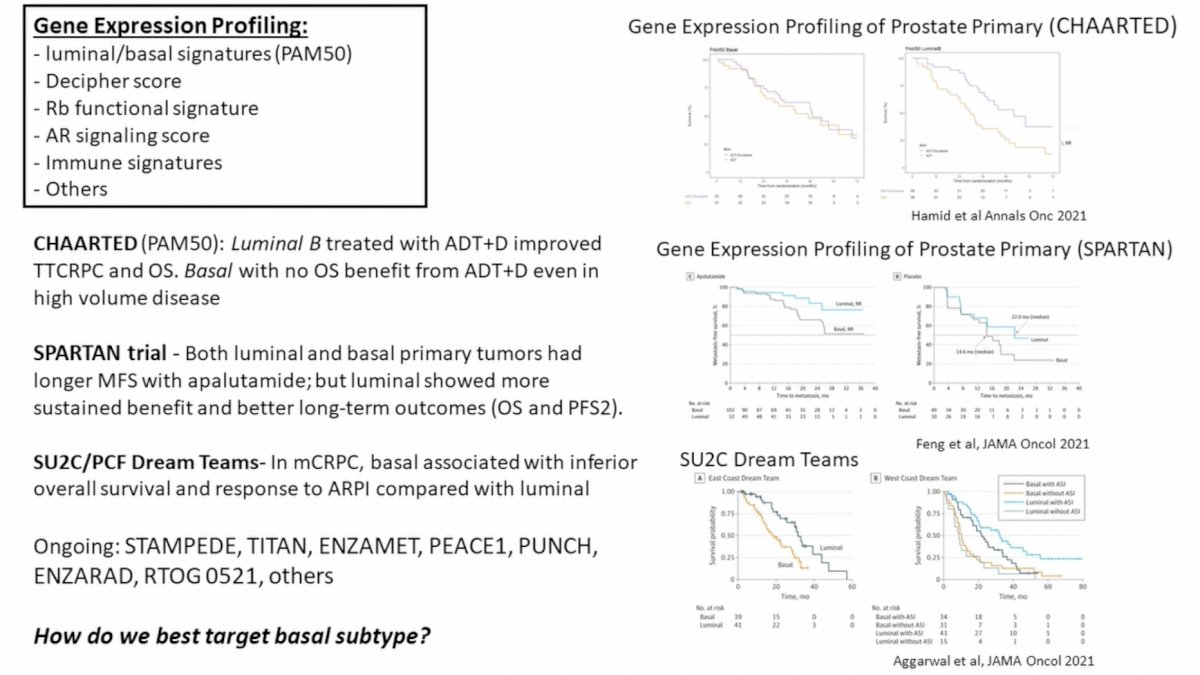 Finally, Dr. Beltran discussed the new molecular data available with PSMA PET scans. PSMA is a cell-surface protein expressed in primary and metastatic prostate cancer. PSMA expression is dynamic and change with treatment and across disease states likely reflecting evolving tumor biology. PSMA-negative lesions have been associated with AR independence, lineage plasticity, and NEPC features. Understanding the biology based on PSMA PET imaging will be an evolving area over the coming years. Specifically, Dr. Beltran is interested to see the response to PSMA therapy in the mHSPC setting and how heterogeneity on PSMA PET impacts treatment response and outcomes.