(UroToday.com) In this session, Dr. Christopher Sweeney, discussed whether different subgroups of patients with metastatic hormone-sensitive prostate cancer (mHSPC) need different treatments. He opened by reviewing important features to consider in personalizing treatment related to the patient, clinical features, and tumor biology. Patient-specific factors to consider include their preferences, life expectancy, comorbidities, performance status, and access to therapies. Important cancer-specific features include whether it presents as synchronous versus metachronous metastatic disease, and the volume of disease. Tumor biology is an emerging area of importance with regards to treatment selection and is covered in detail in a separate talk by Dr. Himisha Beltran. 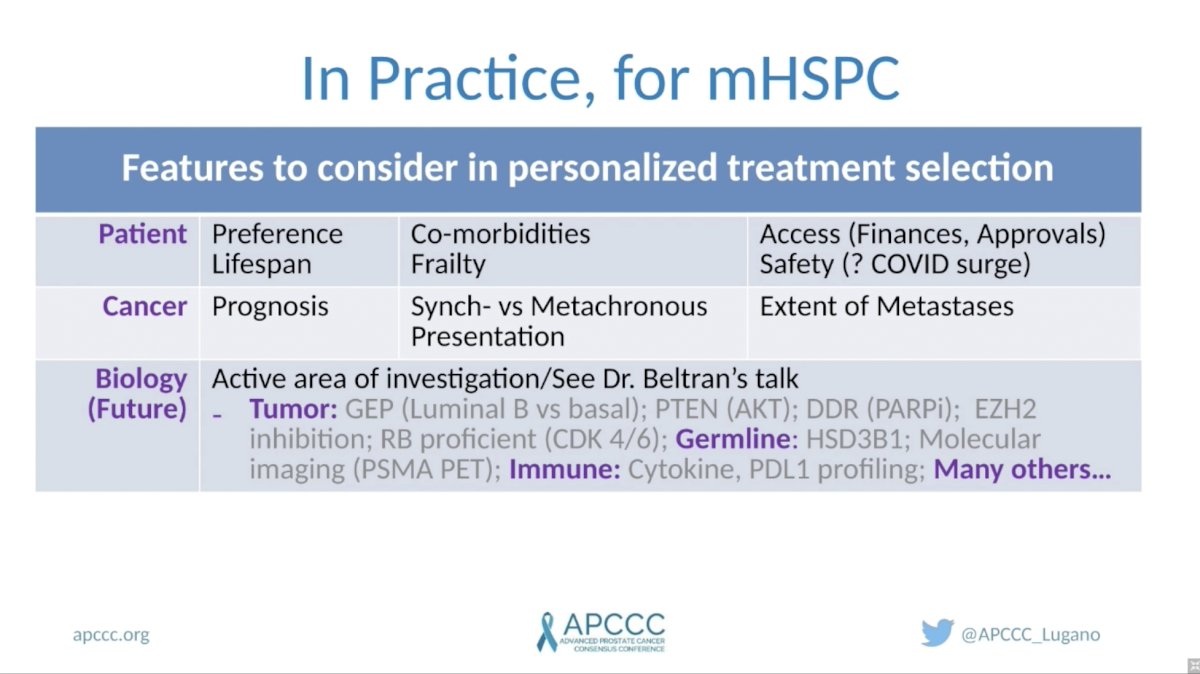 Dr. Sweeney posited that men with mHSPC have a wide array of prognoses that 1) can be readily defined by clinical variables, 2) impact the efficacy of different treatment strategies, and 3) harbor unique underlying biology. He began by reviewing previously proposed definitions of good versus poor-risk groups. Across four trials, each with slightly different definitions of risk, clinical prognostic groups were able to stratify men into those with good versus poor prognoses. Comparing the various definitions across trials, he raised the question of whether the following definition could be considered a consensus poor-risk group: four or more bone metastases regardless of location and/or liver metastases. 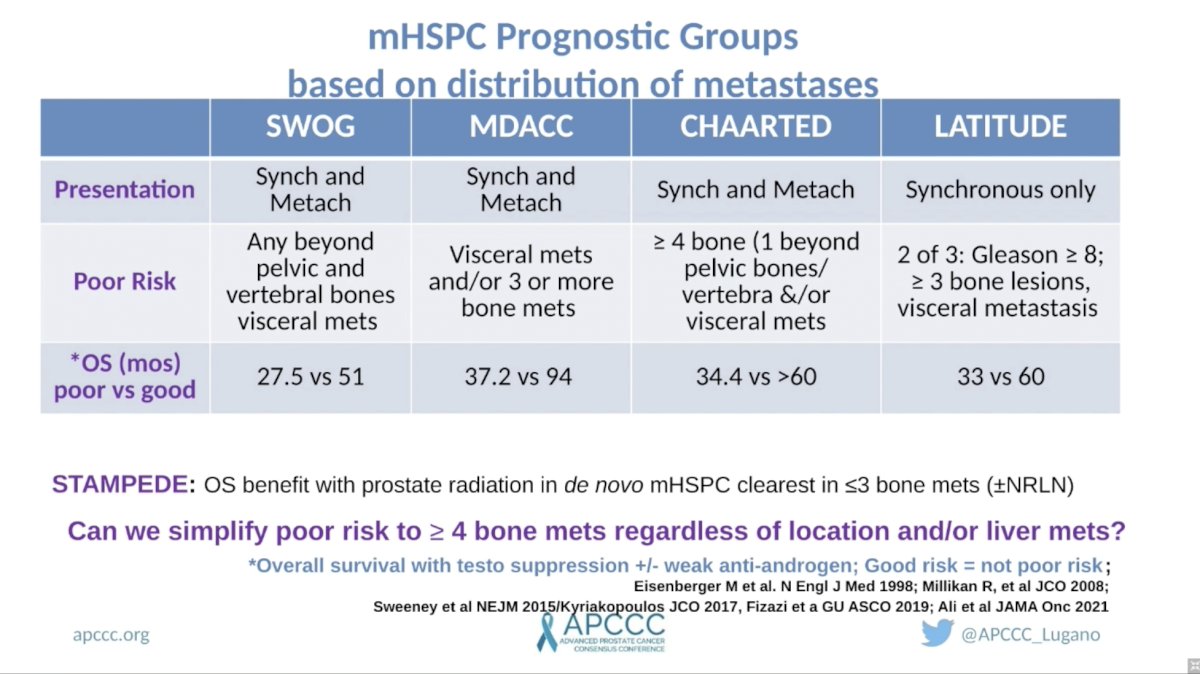 Dr. Sweeney moved on to discuss the prognostic impact of specific clinical features, starting with synchronous versus metachronous presentation and high versus low volume. Several lines of evidence suggest that synchronous and high volume are each individually associated with inferior outcomes. Men with synchronous (or de novo) high-volume disease have the worst prognosis of all men with mHSPC. Conversely, men with low-volume metachronous (or relapsed after prior local therapy) mHSPC have the best long-term outcomes. 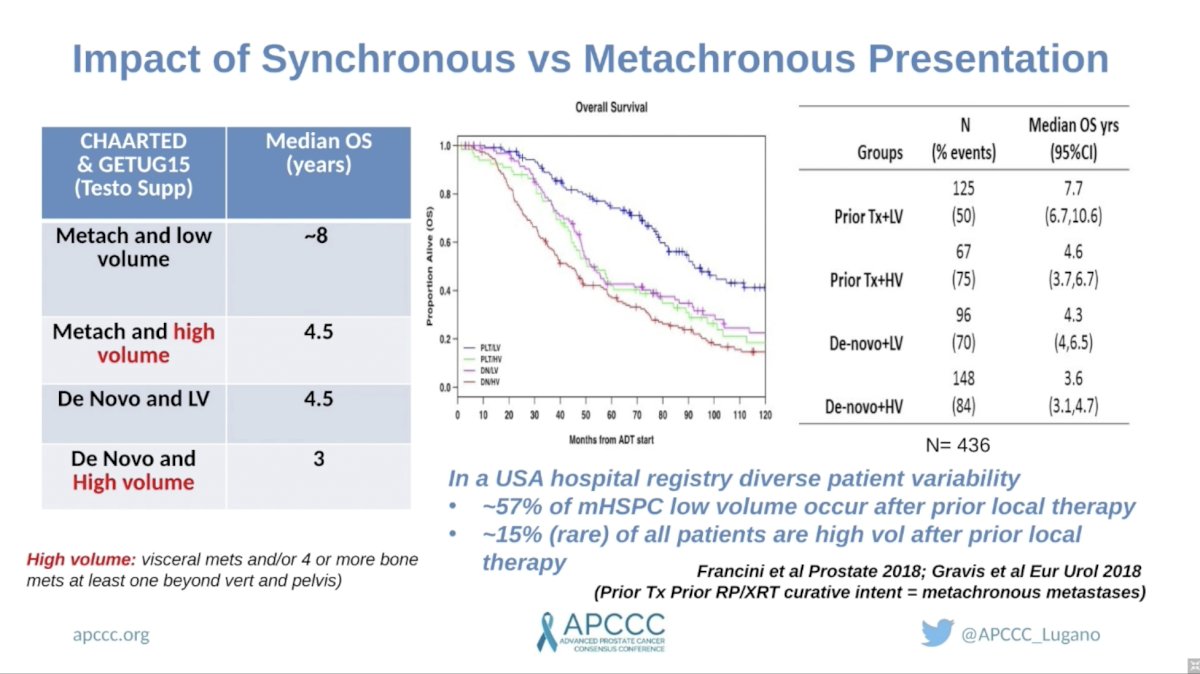 He next discussed the efficacy of approved mHSPC therapies across these prognostic groups focusing on four categories: 1) all men with mHSPC, 2) men with high-volume mHSPC, 3) men with low-volume synchronous mHSPC, and 4) men with low volume metachronous mHSPC. Starting with docetaxel, he reviewed data for the GETUG15, CHAARTED, and STAMPEDE trials. He noted an overall modest hazard ratio for overall survival (OS) across the three studies for all men with mHSPC, but a more robust and consistent HR in men with high-volume disease. The benefit was smaller and inconsistent in men with low-volume synchronous mHSPC and those with low volume metachronous mHSPC did not benefit from the addition of docetaxel to ADT. 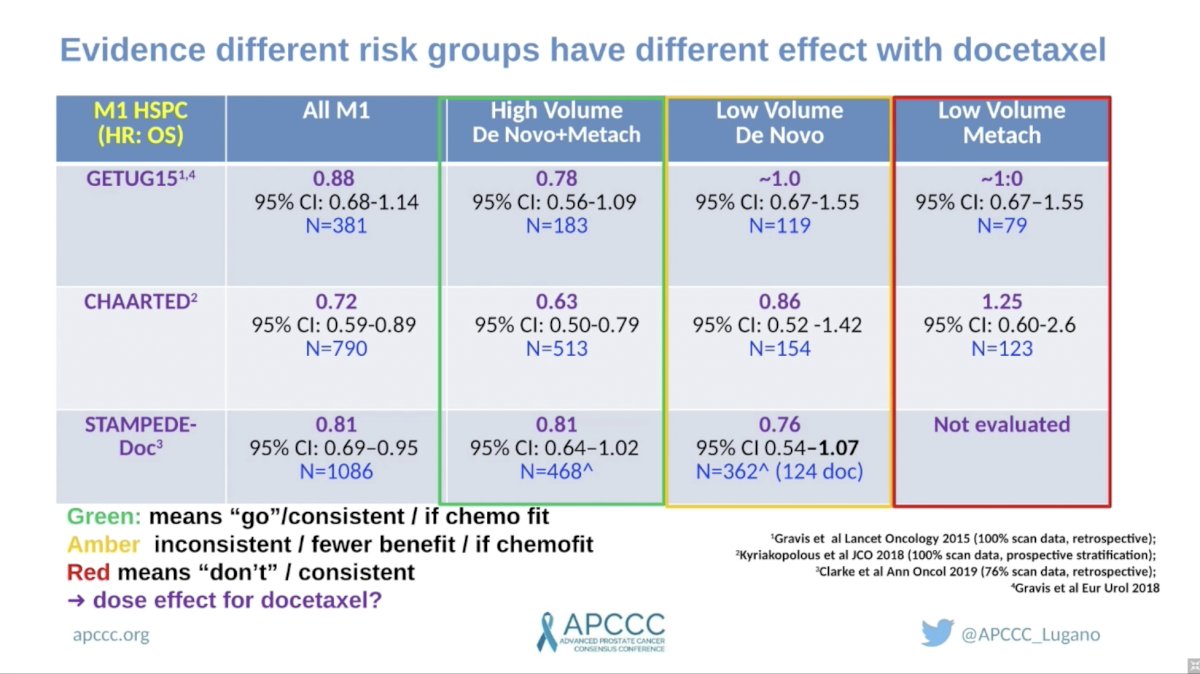 Moving on to AR targeted therapies (including abiraterone, enzalutamide, and apalutamide), their benefit was consistent across subgroups. Not only was the HR strong for the overall mHSPC cohort, but both men with high and low volume disease also demonstrated robust and consistent benefit. Additionally, ENZAMET and TITAN for the first time demonstrate a significant benefit for the addition of enzalutamide or apalutamide, respectively, to ADT in men with metachronous mHSPC. 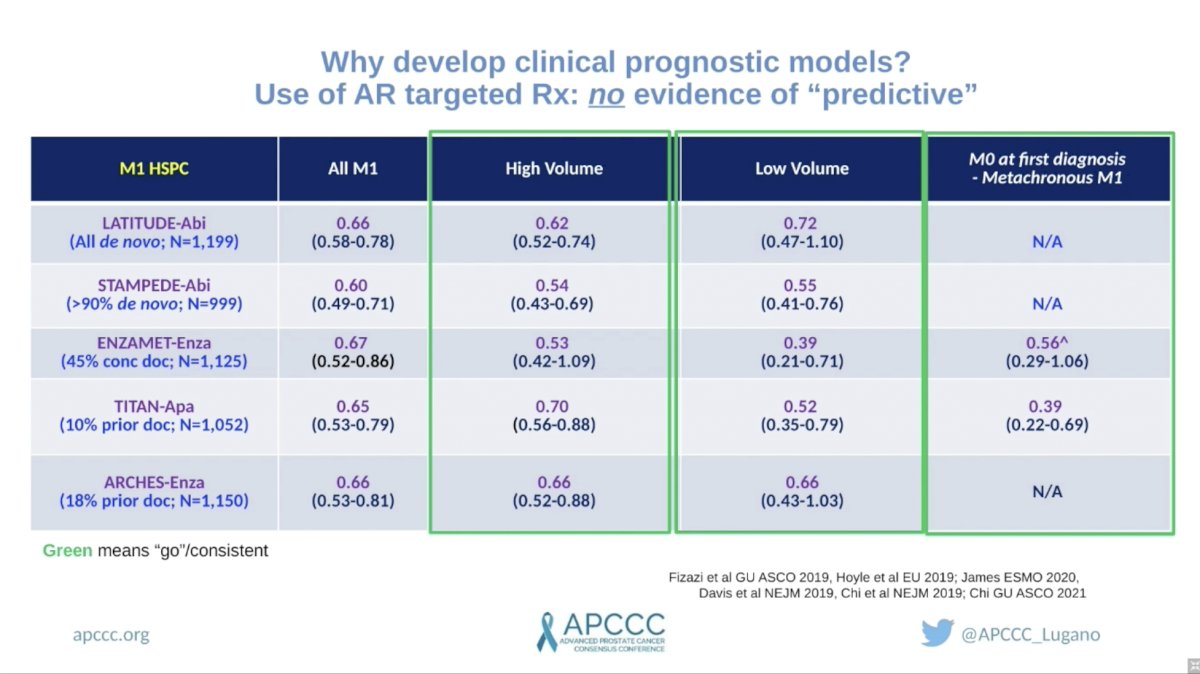 Dr. Sweeney briefly discussed the activity of triplet therapy (ADT plus docetaxel plus an AR targeted therapy) across mHSPC subgroups. Several Phase 3 RCTs are ongoing, which should provide insights into the benefit of triplet versus doublet therapy. At this time, the most robust data coming from PEACE-1, which suggests that men with high-volume mHSPC benefit from the addition of abiraterone to ADT plus docetaxel, but the benefit is less clear in those with low-volume disease. A significant caveat is that the low-volume OS data from PEACE-1 is immature given the low number of events in this cohort. Data from ENZAMET will also shed light on this question, but that data remains immature as well. 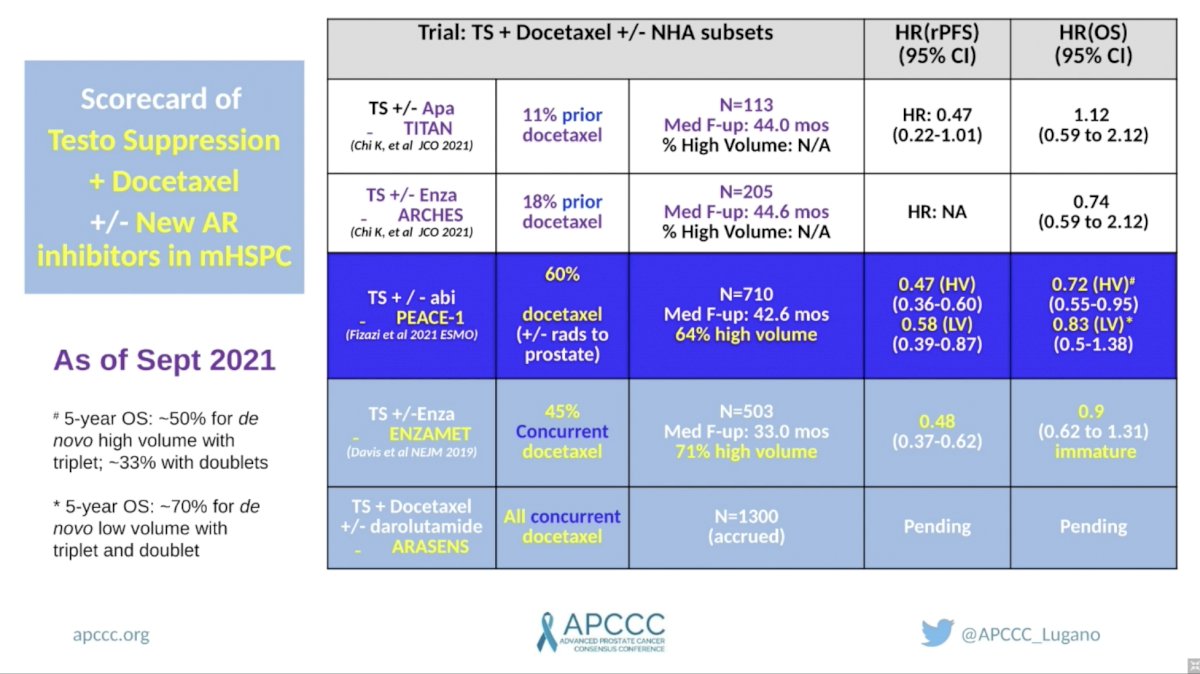 Finally, Dr. Sweeney advocated that men with liver metastases at the time of mHSPC diagnosis be considered as a separate poor-risk group. Whereas subgroup analysis of the CHAARTED study demonstrated benefit for the addition of docetaxel to ADT in men with mHSPC with liver metastases, the benefit was less clear for those treated with AR targeted therapy on the TITAN and ARCHES trials. 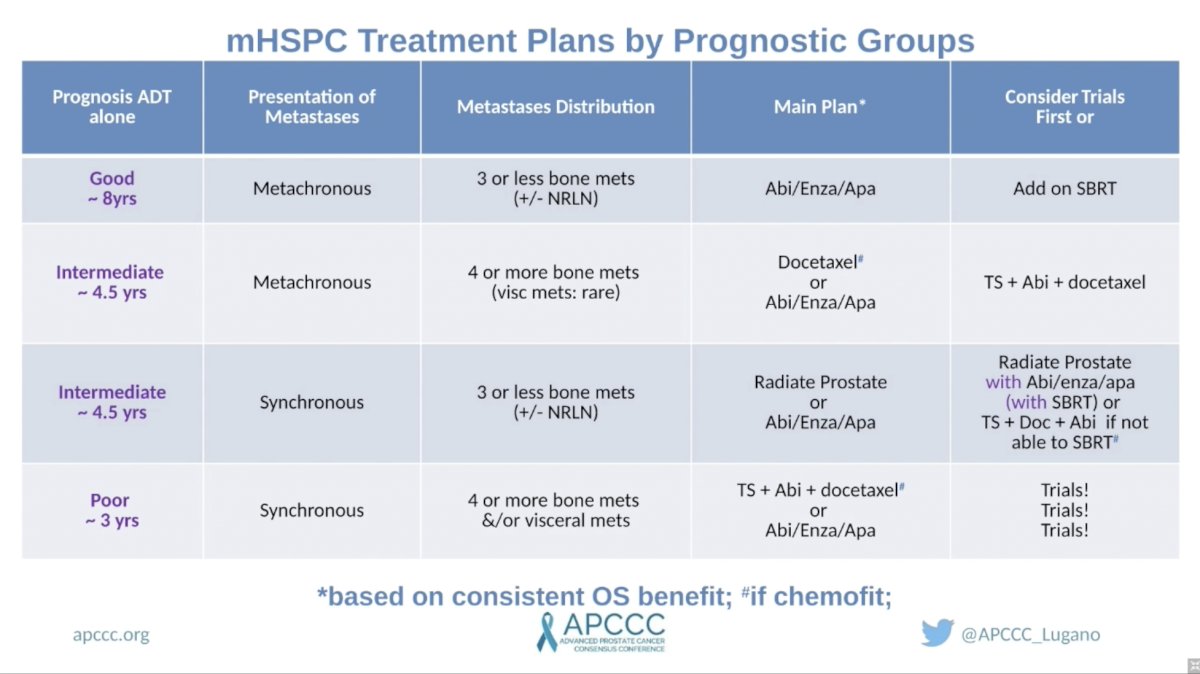