Basel, Switzerland (UroToday.com) The bone and bone metastases session at APCCC 2019 featured a debate regarding the use of antiresorptive therapy to reduce skeletal-related events (SRE) risk in men with bone-mCRPC. Dr. Chris Parker from The Royal Marsden Hospital discussed utilization of these therapies only for very select men.

Dr. Parker summarized the evidence base in 2002 after the publication of zoledronic acid 039: (i) the median duration of treatment was only 9 months, (ii) skeletal surveys detected every 3 months detected asymptomatic fractures, (iii) the lower dose was better than the higher dose, (iv) there was no overall survival benefit, (v) there was no quality of life benefit.

Moving forward to 2017, Himelstein and colleagues assessed the effect of longer-interval versus standard dosing of zoledronic acid on skeletal-related events among patients with breast, prostate, multiple myeloma bone metastasis2. For this trial, patients were randomized to receive zoledronic acid administered intravenously every 4 weeks (n = 911) versus every 12 weeks (n = 911) for 2 years. Among these 1,822 patients 795 completed the study at 2 years. A total of 260 patients (29.5%) in the zoledronic acid every 4-week dosing group and 253 patients (28.6%) in the every 12-week dosing group experienced at least one skeletal-related event within 2 years of randomization (risk difference of -0.3%; p < .001 for noninferiority). This trial concluded that the use of zoledronic acid every 12 weeks compared with the standard dosing interval of every 4 weeks did not result in an increased risk of skeletal events over two years.

So, what changed in the last 20 years? According to Dr. Parker, there are several changes, including (i) the mean overall survival of these metastatic patients increasing from 15 months to 32 months, (ii) an increase in the median time to skeletal-related event from 11 months in Dr. Saad’s initial trial in 2002 to 31 months in PREVAIL3, (iii) the type skeletal-related event has changed from a large proportion of fractures in zoledronic acid 039 to primarily radiation therapy to the SRE in PREVAIL, and (iv) an awareness of bone health management.

Dr. Parker notes that a major concern for prolonged treatment for all-comers is osteonecrosis of the jaw for patients on bisphosphonates. As depicted below, the cumulative hazard for this devastating adverse event increases substantially after 3-4 years on the medication: 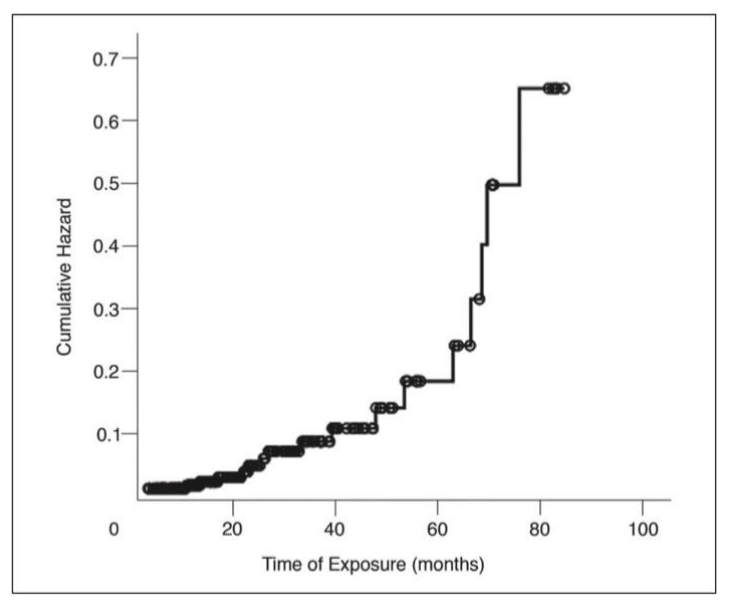 According to the NICE guidelines for bone health in 2017, oral bisphosphonates are recommended as an option for patients if their 10-year probability of osteoporotic fragility fracture risk is at least 1%. The UK Prostate Clinical Excellence Group guidance in 2019 suggested several lifestyle measures for men on ADT, such as weight-bearing exercises, smoking cessation, ≤ 2 units of alcohol per day, and adequate calcium and vitamin D status. They also recommended that men starting ADT for more than 1 year should be considered for oral bisphosphonates.

Dr. Parker concluded with the following summary table depicting differences in bone health management between 2002 and 2020: 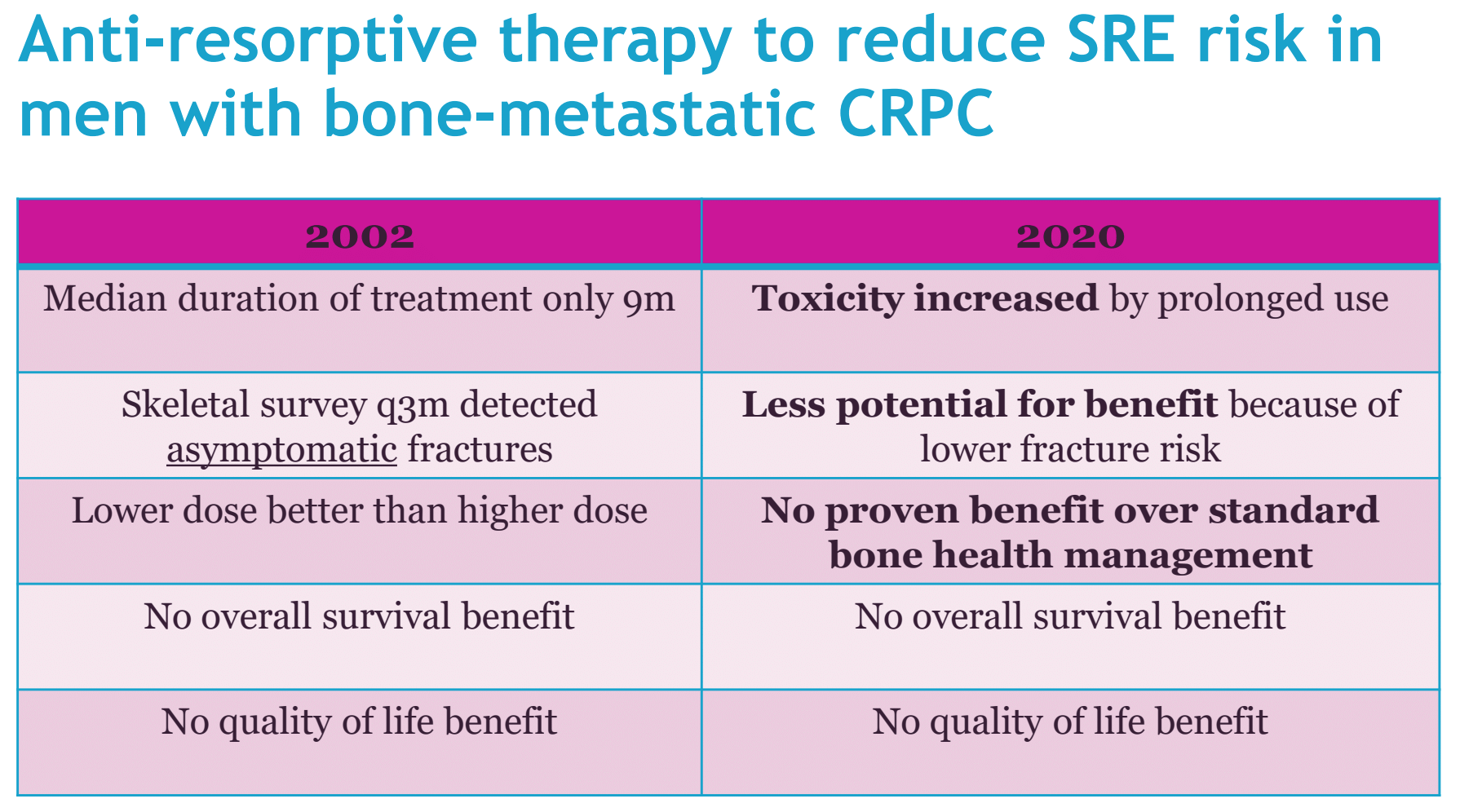