Dr. Parker began by discussing watchful waiting based on data “from the last century”. He described watchful waiting as a “worst case scenario”, indicative of the natural history of untreated. Thus, outcomes for patients treated with active surveillance can only have a better outcome. Further, cancers diagnosed today will have a better natural history given the increased use of PSA testing, more use of MRI, changes in biopsy technique, and changes in Gleason score.

In spite of this, he highlighted data from Albertsen and colleagues from 1998 among patients diagnosed from 1971 to 1984 who were treated conservatively. As highlighted in what Dr. Parker called “iconic” figures, prostate cancer specific mortality varied on the basis of age at diagnosis, Gleason score, and time since diagnosis. 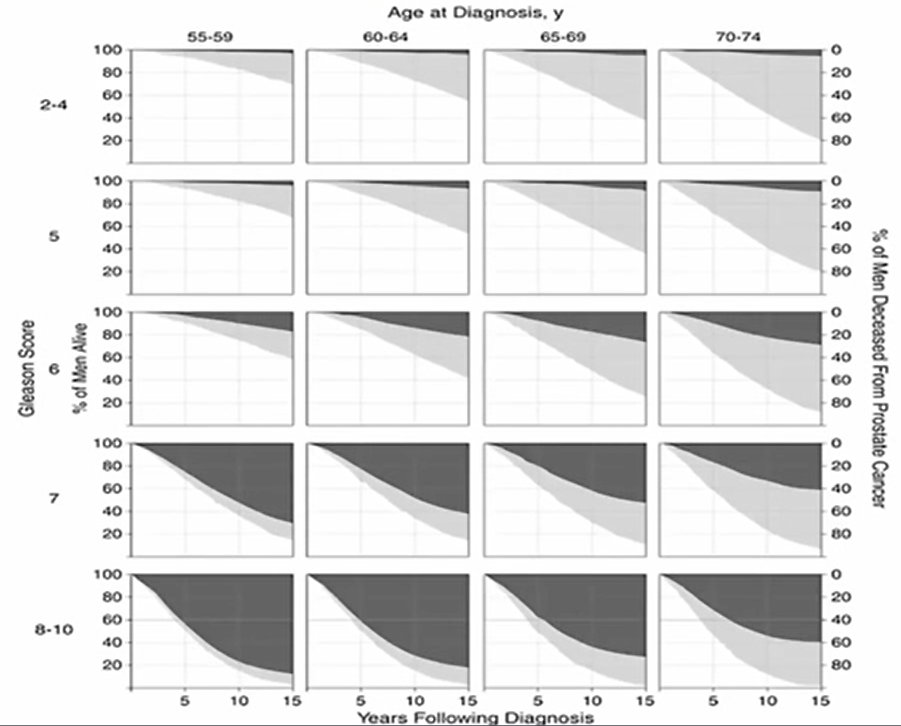 Dr. Parker highlighted that, for patients with Gleason score 6, prostate cancer specific mortality was approximately 20% at 15 years, indicating that this would be the worst case scenario for a conservative treatment approach.

Since this time, PSA testing was relatively widely adopted. Dr. Parker then highlighted his own work to predict the natural history of screen-detected localized prostate cancer. In this case, the estimated 15-year prostate cancer specific mortality was approximately 1%, rather than the 20% among an unscreened population in Dr. Albertsen’s data. Rather than modeling, PIVOT demonstrated in a randomized trial that the prostate cancer mortality at 15-years for those with low risk disease who were treated with observation is approximately 5%.

In PROTECT, active monitoring was utilized as a comparator. At 10-years, the risk of prostate cancer specific mortality was 1% for patients who received this approach. Thus, he emphasized that long-term outcomes for watchful waiting are generally very good. Therefore, there is relatively little room for improvement with more intensive regimes.

He then transitioned to discussing the “early days” of active surveillance. This is premised on the idea that watching over time may allow identification of those men who will benefit from active treatment. He highlighted the earliest report from the Toronto cohort published by Dr. Choo, Dr. Klotz, and colleagues in 2002. These authors included a wide range of patients with T1 or T2 disease, those with Gleason score 7 or less, and PSA up to 15 ng/mL. Patients were watched with PSA and DRE with a repeat biopsy at 18 months. Selective intervention was offered for PSA progression, histologic progression, or clinical progression. This is, in Dr. Parker’s words, a high bar for intervention. In spite of this, the long-term outcomes in this cohort are very good. Relatively to the risk of dying from prostate cancer, data from this cohort have demonstrated that the risk of dying from other causes is substantially (and statistically significantly) higher.

Dr. Parker then highlighted data from Dr. Fall and colleagues which showed that PSA kinetics were poor predictors of the eventual lethality of cancer. Further, he highlighted that the limitations of TRUS prostate biopsy were better appreciated. To this end, he showed data from PROMIS demonstrating a relatively poor identification of significant prostate cancer based on TRUS biopsy, compared to template mapping biopsy. Additionally, he highlighted that, among men with Gleason 6 disease on TRUS biopsy, 70% of men will be upgraded based on template mapping biopsy.

This leads to the rationale for MRI in active surveillance. Dr. Parker highlighted that initial uptake of MRI may have been limited by the extensive artifact seen following biopsy which limits useful interpretability. Dr. Parker highlighted that multi-parametric sequences, including diffusion weighting, can provide useful information regarding the presence of adverse histology. Notably, among patients with high ADCs, adverse histology was not found and perhaps repeat biopsy could be omitted. Thus, the Royal Marsden surveillance policy moved to annual PSA monitoring with MRI at 12 months and then every 2 years thereafter. MRI-based triggers were then used to initiate treatment, including increases in tumor volume or evidence of extra-prostatic disease. He acknowledged that these criteria are somewhat arbitrary.

This observation regarding high ADCs to spare repeat biopsy led to consideration of using MRI as an initial triage, prior to first biopsy. This formed the basis of the PROMIS study which generally supported this hypothesis and formed the basis of practice standard of care with initial upfront MRI. In the context of active surveillance, upfront use of MRI is likely to identify those cancers which benefit from treatment earlier. Thus, the insignificant cancers for which active surveillance is most indicated should be diagnosed much less frequently and the number of men on active surveillance is likely to diminish.