(UroToday.com) In a session entitled Clearer Vision chaired by Dr. Bertrand Tombal at the 2021 ANZUP Annual Scientific Meeting, Dr. Alison Birtle discussed what she described as wishful thinking in genitourinary oncology, with a focus on optimal therapy for systemic therapy in upper tract urothelial carcinoma (UTUC).

She began by considering the similarities and differences between UTUC and bladder cancer. There are pathologic differences between the two but perhaps more importantly, clinically, more than half of patients with UTUC present with invasive disease. Prior to POUT, surgical extirpation with nephroureterectomy followed by surveillance was the standard of care. However, in bladder cancer, the role of chemotherapy is well established with neoadjuvant therapy demonstrating the best evidence for improved disease free and overall survival.

Unfortunately, compared to bladder cancer, confirming UTUC stage pre-operatively is difficult. Therefore, routine use of neoadjuvant therapy is likely to lead to significant overdiagnosis. While trials of adjuvant chemotherapy in bladder cancer have proven difficult to recruit to due to the morbidity of cystectomy, nephroureterectomy is relatively less complex and morbid so post-operative recovery would be expected to be smoother and, thus, recruitment to an adjuvant trial in UTUC was anticipated to be less challenging.

Dr. Birtle then addressed the question of whether neoadjuvant therapy should be preferred due to the patient having two kidneys in situ. Addressing this, she highlighted data among patients with eGFR >60 at baseline who underwent nephroureterectomy. The median early and late eGFR were 49 and 49.6 in this population of 374 patients. Thus, while there was a median decline of 32%, she emphasized that this baseline inclusion requiring a eGFR over 60 is higher than many patients in practice (and higher threshold than needed to give cisplatin in her perspective) and also that the resulting eGFR postoperatively (~50) is certainly sufficient to give carboplatin and on the threshold to give cisplatin or fractionated cisplatin. She further highlighted that there is a non-significant rate of pathology which wouldn’t require chemotherapy: 12.9% of patients undergoing nephroureterectomy in one cohort did not have urothelial carcinoma. In ODMIT-C, among 284 patients, 7 patients had no cancer and 13 had a non-urothelial histology.

In terms of pre-operative staging, she emphasized that approaches range from 60-89%. Given dramatic differences in prognosis between those with pT1 (5-year DSS of 92%), pT2 (73%), and pT3 (41%), she emphasized her unease with the idea of neoadjuvant chemotherapy being widely adopted. The largest reason for POUT ineligibility was evidence of pT1 disease on final pathology.

Dr. Birtle then discussed the phase II neoadjuvant ECOG-ACRIN 8141 study of patients planned for nephroureterectomy who had high-grade UTUC (with biopsy, cytology, and a visualized mass/hydronephrosis). Patients received neoadjuvant chemotherapy with the regime dictated by their creatinine clearance (>50 = A-MVAC; 30-50 = gemcitabine/carboplatin). The primary endpoint of this study was the pathological complete response rate, with success defined at 3 patients having pCR among 28 (10.7%). In the end, 3 patients had ypT0 (14%) and the partial response rate with downstaging to ypT1 or less was 60%. Considering these data, Dr. Birtle emphasized that this is a small, phase II study and that pT1 disease was relatively common in POUT so downstaging here may not actually reflect treatment effect.

A recent systematic review assessing neoadjuvant and adjuvant chemotherapy in UTUC. Both in terms of studies included (n=6 vs 14) and patients accrued (n=869 vs 7983), the data is much more limited for a neoadjuvant approach.

However, while data are limited, there appears to be a benefit to each approach. However, all data for neoadjuvant are “at least level 2 evidence” whereas there are two prospective RCTs of adjuvant treatment providing level 1 evidence.

Dr. Birtle then provided an update on POUT. She again, based on the rationale described above, why POUT examined adjuvant therapy including an audit of surgical approaches and oncologist treatment patterns. They further used patient focus groups to assess interest in this approach. From both clinicians and patients, adjuvant therapy was clearly preferred.

She then summarized the POUT design which included patients with invasive UTUC following nephroureterectomy and randomized them in a 1:1 fashion to received adjuvant chemotherapy (with regime dictated by renal function) or surveillance. Patients were followed per protocol. 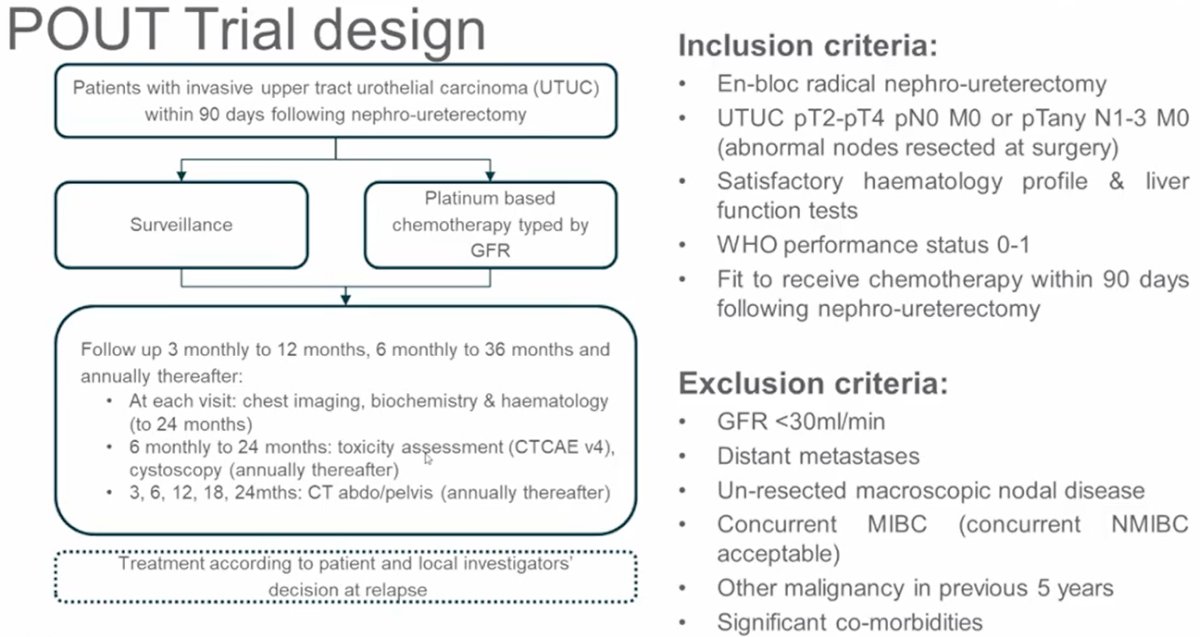 These results were robust to numerous a priori subgroup analyses including nodal involvement, planned chemotherapy type, and margin status.

Currently, overall survival is underpowered as the trial closed early. However, there is a trend towards improved overall toxicity. Toxicity analyses demonstrated no long-term effects and manageable short term toxicity. Patient reported quality of life declined in the first three months among those receiving chemotherapy but returned to the level of patients on surveillance by 6 months.

Moving forward, Dr. Birtle emphasized that molecular characterization of UTUC is rapidly advancing. We are appreciating that, compared to bladder cancer, UTUC has increased luminal and decreased basal subtype, an increased immune depleted profile, greater prevalence of MSI-high subtypes, and increased overexpression of FGFR mutations. As a result of this last feature, treatment with the FFR3 inhibitor infigrantinib has demonstrated promising results in the metastatic setting.

In terms of ongoing trials, Dr. Birtle emphasized that PURE-02, led by Dr. Necchi, is examining the effect of neoadjuvant pembrolizumab on pCR. In contrast, PROOF-302 is examining the role of infigratinib or placebo as adjuvant therapy for patients with either bladder cancer or UTUC who have alterations in FGFR3 and AMBASSADOR is comparing adjuvant pembrolizumab to observation in patients with pT2-pT4a disease. Adjuvant immunotherapy in bladder cancer in CheckMate274 demonstrated a benefit in bladder but not in UTUC. Dr. Birtle highlighted that post-operative surveillance is inappropriate based on results of POUT, thus observation (as offered in AMBASSADOR) may not be appropriate.

Dr. Birtle emphasized that in advanced disease, despite many trials of combination therapy, upfront chemotherapy remains the standard of care for patients with urothelial carcinoma. However, maintenance immunotherapy with avelumab can be used for those with advanced disease.