He began with the case of a 68-year-old man, without significant comorbidity apart from hypertension, presenting with urinary frequency. On physical exam, he had findings consistent with cT2 prostate cancer and, on laboratory testing, prostate specific antigen (PSA) was elevated at 16.4. Dr. Tan first asked the audience the best imaging modality in men with suspected high-risk localized disease. While the vast majority of the audience responded prostate-specific membrane antigen (PSMA)-PET/CT, he suggested that magnetic resonance imaging (MRI) would be most helpful in terms of initial tumor assessment.

Dr. Tan then asked if further imaging would change management, particularly if conventional staging investigations (bone scan and CT scan) were negative but PSMA-PET/CT demonstrated nodal metastases. The audience response was split, but Dr. Pearse suggested that upstaging on the basis of PSMA-PET/CT may meaningfully affect a radiotherapy-based treatment approach.

At this point, Dr. Emmett discussed the role of PSMA-PET/CT. In men planned for external beam radiotherapy and androgen deprivation therapy (ADT) for high-risk localized prostate cancer, there were meaningful rates (21% of patients) of upstaging (and occasional down-staging) with the use of PSMA-PET/CT. 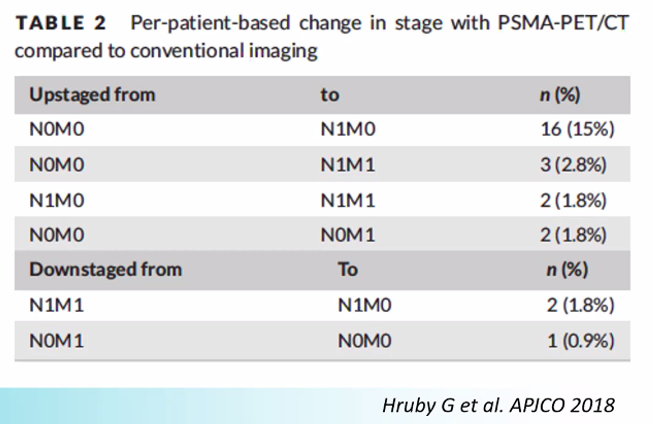 Dr. Emmett then discussed the recently published ProPSMA trial which was an Australian trial of Ga-68-PSMA-PET/CT for the staging of patients with high-risk disease prior to definitive intervention, with a cross-over design to conventional imaging. PSMA-PET/CT was more accurate in detecting extra-prostatic disease (92 vs 65%, p<0.0001), had a higher management impact (28 vs 15%, p=0.008), had fewer equivocal findings (7 vs 23%), and had a lower radiation exposure (8.4 mSv vs. 19.2 mSv, p<0.001). However, in spite of these randomized data, Dr. Emmett highlighted that funding is often not available to cover the cost of PSMA-PET/CT so often this places a financial burden on patients. 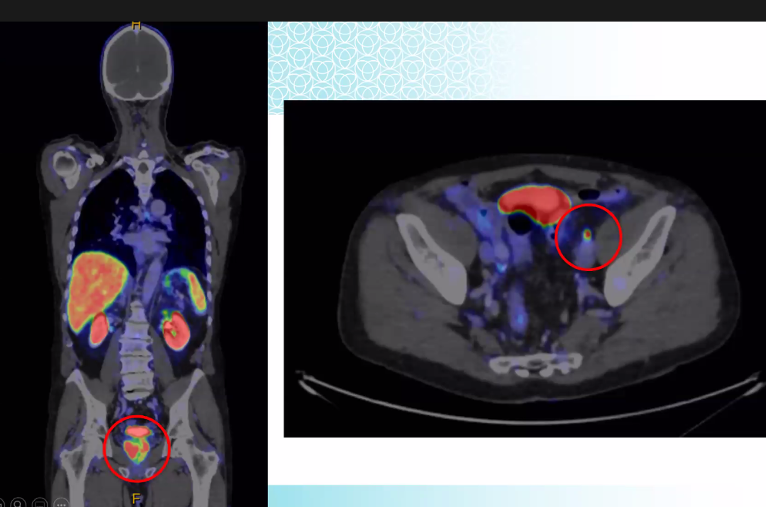 Dr. Emmett emphasized that, per RECIST criteria, this is not a lesion with measurable disease burden given that it’s less than 1 cm. Thus, based on conventional imaging, this man would be considered to have high risk localized disease. However, Dr. Pearse emphasized that, with this PSMA-PET/CT data available, she would recommend extending the radiotherapy field to include the nodes.

Dr. Tan then asked the audience and the panelists how they would define oligometastatic disease, including one, 1-3, 4-10 sites of disease, or some other definition. Dr. Pearse highlighted that while the concept of oligometastases was first described in 1995, there remains no good definition: initially, 1-3 lesions were considered oligometastatic disease but she added that many now consider up to 5 lesions.

Dr. Tan presented data from Dr. Ost showing that radiotherapy to oligometastatic disease can defer the initiation of ADT. However, when he asked Dr. Pearse if she would recommend ADT following SBRT of oligometastatic disease, she said she would, though the data is unclear and there is not strong evidence to support this approach. Dr. Fong concurred, similarly advising the use of ADT given evidence of synergy between ADT and radiotherapy with radiosensitizing effects, however acknowledging the lack of evidence to support this approach. In polling the audience, approaches were split with respect to this question.

Continuing with the case, Dr. Tan described that this case was discussed at a multidisciplinary tumor board with radiotherapy-based treatment and ADT-monotherapy discussed. The patient began ADT with LHRH agonist and bicalutamide lead-in. He was then referred to medical oncology for consideration of further systemic therapy.

Dr. Tan then asked if this patient should be considered as having low or high-volume disease to which most of the panelists, and 50% of the audience, suggested that it was complicated. The remainder categorized this as low volume disease. Dr. Fong emphasized that the disease biology is more important than “volume” likely. Given this man’s de novo locally advanced disease, he would be predicted to behave aggressively.

Dr. Tan then polled the audience as to what treatment approach should be used. Results were mixed though most suggested that he should receive intensified treatment, compared to ADT alone.

Dr. Gon expressed that he, like Dr. Tan, would favor the use of ADT with abiraterone. To this end, they showed data highlighting that the survival benefits associated with the addition of docetaxel in mHSPC are limited to those with the high-volume disease while this is not true of the addition of abiraterone acetate. Dr. Fong emphasized that data from the STAMPEDE trial, as it included patients with high-risk localized disease and node-positive disease, are likely most directly applicable to this case. He further emphasized that funding and reimbursement issues will likely influence treatment choices for many patients. Dr. Martin Stockler, an audience member stated that, in Australia, neither abiraterone or enzalutamide are funded in this setting. 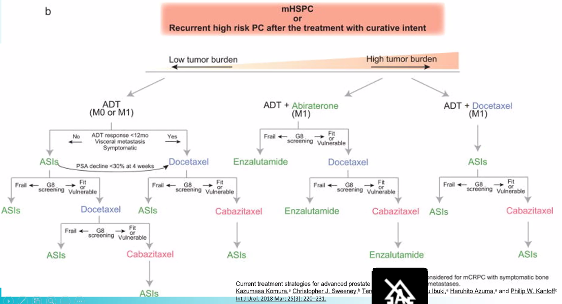 Continuing with the case, Dr. Tan described the patient experiencing multiple hot flushes daily, significant fatigue, irritability, and poor sleep within 6 weeks of initiating ADT. In an audience poll, he suggested multiple approaches including stopping ADT, enlisting the help of a nurse specialist, referral to psychosocial services, or starting megestrol acetate. Ms. Tiffany Schwass, uro-oncology nurse specialist, emphasized that there are many reasons why patients may not tolerate ADT, some of which may not be directly attributable to ADT. She emphasized the importance of screening for depression, exercise and dietary modification, and assurance.

Moving forward with the case, Dr. Tan described him starting abiraterone 1000mg daily and prednisone 10mg daily, along with his ADT. In the following months, his PSA declined to 0.2ng/mL. Following the initiation of this systemic treatment, Dr. Tan asked whether we should consider consolidative radiotherapy. The majority of audience members endorsed this approach, to which Dr. Pearse concurred, stating that she would offer treatment to the prostate and pelvic lymph nodes.

She emphasized that STAMPEDE included prostate only radiotherapy in low volume metastatic disease, but didn’t treat nodes. In response to a hypothetical question from Dr. Tan regarding a patient with a high volume of disease who has a great response to systemic therapy, Dr. Pearse suggested consolidation is possible or radiotherapy could be deferred until progression.

Ms. Schwass then discussed the management of lower urinary toxicity of radiotherapy. She emphasized that urinary symptoms are common following radiotherapy with some having short term while others have longer-term effect. In her view, fluid management is important in this patient population with some drinking too little, some too much, and some the wrong kinds of fluids (e.g. coffee or caffeinated sodas). Dr. Pearse emphasized that acute radiotherapy toxicity peaks at 2 to 3 weeks following the start of therapy and should settle within 2 or 3 months. She suggested that referral for further management should be undertaken if this has not occurred.

When necessary, the panel suggested evaluation with uroflow, urine microscopy and culture, and cystoscopy.

Continuing with the case, the patient was referred to radiation oncology with a plan for consolidative radiotherapy. Unfortunately, prior to the consultation, he developed lower abdominal pain and PSA increased from 0.2 to 0.4 over 3 months. Dr. Tan then polled the audience as to their next steps. The majority suggested re-imaging with PSMA-PET/CT.

PSMA is somewhat controversial as available treatment options are systemic. However, given prior PSMA avidity, it should be sensitive to use in this setting. Dr. Tan highlighted that, in patients with nmCRPC based on conventional imaging, a large proportion will have detectable disease using PSMA-PET/CT: 196/200 patients in one study, comprising 44% with pelvic nodal disease and 55% with M1 disease. However, Dr. Emmett emphasized that it’s unclear whether this information is helpful or actionable.

A repeated biopsy was performed demonstrating poorly differentiated carcinoma, in which neuroendocrine prostate cancer could not be excluded. Dr. Tan then asked the panelists and the audience how they would approach treatment of this site of disease progression. While responses were mixed, most favored an approach including systemic therapy.

Dr. Pearse emphasized that this patient has an extensive burden of local disease in the pelvis which has already become symptomatic. Therefore, it would be expected that he will continue to develop issues with local progression. Dr. Fong concurred and expressed a preference for initiation radiotherapy, given the speed of progression and need for local control.

Continuing with the case, Dr. Tan described that this patient received palliative radiotherapy to the prostate and pelvis with 30Gy in 6 fractions. A subsequent PSMA-PET/CT demonstrated an increase in the pelvic mass, along with new pulmonary and hepatic lesions, consistent with metastases through histologic confirmation with lung biopsy was unsuccessful.

Dr. Tan then asked what the next line of therapy should be considered, including options of novel androgen antagonists, docetaxel chemotherapy, docetaxel-carboplatin chemotherapy, carboplatin-etoposide chemotherapy, checkpoint inhibition, or lutetium. The audience concurred with Dr. Tan and Dr. Fong who recommended a carboplatin-based chemotherapy approach. Dr. Fong emphasized that the actual regime is probably less important though consideration of a docetaxel-containing regime may be prioritized for patients with coexisting adenocarcinoma while etoposide may be more appropriate for those with pure small cell carcinoma. Dr. Fong also stressed that outcomes will be poor regardless of treatment in this clinical circumstance.

Dr. Tan then asked Dr. Emmett about the role of directed ligand therapy in this setting. She stated that small cell is contra-indicated for TheraP trial and that the best responses to Lutiteum-based targeted ligand therapy are observed in patients with high PSMA and low FDG expression.

Moving forward with the case, Dr. Tan stated that the patient received docetaxel chemotherapy for 2-cycles while awaiting the results of the lung biopsy. There was evidence of clinical progression with increasing pelvic pain and progression on imaging. As a result, he was switched to carboplatin-etoposide with evidence of disease response following the second cycle. However, he had further disease progression following cycle four and developed bilateral hydronephrosis as a result of this pelvic mass. He then was placed on supportive care and subsequently died.

In closing, Dr. Tan highlighted the importance of considering the heterogeneity of metastatic prostate cancer, particularly with progression to castration resistance. Dr. Fong added that we may further consider the role of germline and somatic genetic testing as this may open up further lines of therapy. Additionally, this case highlighted the potential role of focal radiotherapy in patients with oligometastatic disease and nuclear medicine in both diagnostic and therapeutic roles. From a nursing perspective, this case highlighted the importance of considering the psychosocial impacts of cancer.