Dr. Lynam’s case included a 19-year-old male who presented with a self-detected lump following a football injury. His pre-orchiectomy tumor markers and CT of the chest, abdomen, and pelvis were normal. The pathology from his orchiectomy was classical seminoma, 3.5 cm tumor with rete testis invasion, and no lymphovascular invasion. Dr. Lynam then polled the audience for the next steps in management for this patient including (i) active surveillance, (ii) carboplatin x1 cycle, (iii) carboplatin x2 cycles, or (iv) radiotherapy to the para-aortic nodes. As follows is the audience response to the next steps in treatment for this patient with stage I seminoma:

Discussion amongst the panelists favored surveillance in this patient, but also making sure to highlight that this must include a well-informed and compliant patient. Dr. Bastick notes that in patients that are unwilling to be compliant or those that may be traveling overseas for extended periods of time, she would favor a single cycle of carboplatin. Dr. Lynam notes that based on most guidelines that the number of visits post-diagnosis (whether for surveillance or after a single dose of chemotherapy) are essentially the same, which is important to convey to patients who are weighing their treatment decisions.

Lyndal Moore notes that from the nursing side she is heavily involved with patients in the age range of 15-25, including many with testicular cancer. She states that it is really important to have a strong initial engagement with the patient, utilizing psychosocial screening tools. It is also important to highlight that this age range of patients may have significant mental health illness, in her estimation upwards of >25% of patients. Furthermore, the majority of patients do not have a regular general practitioner and many are transitioning from being a child to an adult and wanting to be independent. Ultimately, it is important to delineate what they understand and make sure they are honest with regards to what their level of compliance will be (including aspects of work, transport, etc). Mrs. Moore also makes sure to get every patient’s contact information and make sure the patient understands that she is very non-judgmental and is an advocate for the patient, sending reminders and making sure they are setting their own reminders in their phone (clinic appointments, tumor markers, imaging, etc).

This patient went on to active surveillance and ultimately was found to have an elevated beta-HCG (152) in the follow-up. Dr. Lynam then posed the following next steps the audience (i) FDG-PET, (ii) CT chest, abdomen, pelvis, (iii) CT brain, chest, abdomen, pelvis, (iv) repeat beta-HCG, or (v) ultrasound of the contralateral testicle. 65% of the audience would opt for a CT of the chest, abdomen and pelvis, followed by 15% repeating the beta-HCG. This patient did receive repeat imaging of the chest, abdomen, and pelvis which was essentially negative. Dr. Lynam notes that there are spurious reasons for the beta-HCG to be elevated, including heterophile antibodies interacting with different assays, cannabis use, pancreatic cancer, and hypogonadism.

In terms of timing and patterns of recurrence, Dr. Lynam and Dr. Bastick note that stage I seminoma patients will typically recur within the first three years. Dr. Bastick also stated that even with chemotherapy, patients will also likely recur within that same time period. This patient was subsequently lost to follow-up and presented three years later with CT imaging demonstrating extensive peri-aortic recurrence: 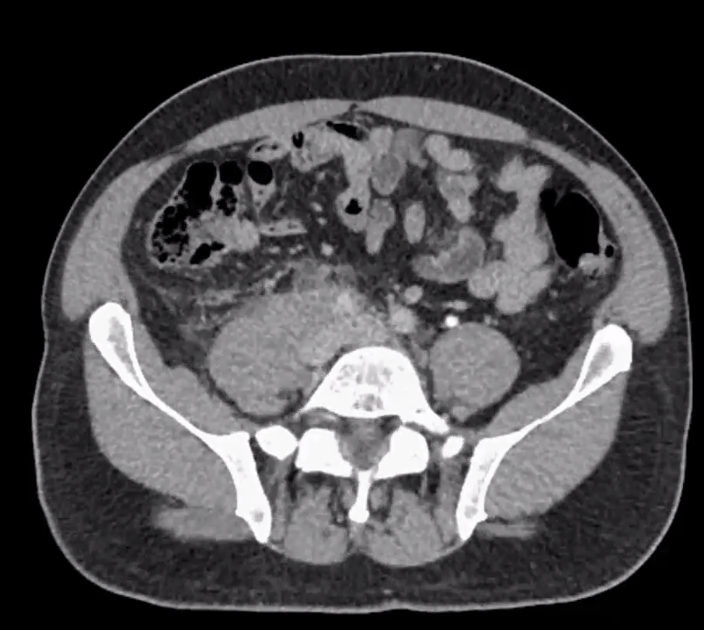 At this point, Dr. Lynam posed the following treatment options for this patient to the audience: (i) BEP x3, (ii) RPLND + adjuvant carboplatin (AUC 7) x2, (iii) EP x4, (iv) BEP x4, or (v) dog-leg radiotherapy. The audience overwhelming (85%) would offer BEP x3 in this patient with good-risk metastatic seminoma. Dr. Bostick strongly prefers BEP x3 rather than EP x4, unless there is a convincing reason not to give the patient bleomycin; she feels that the extra cycle of cisplatin is less preferable given the not insignificant side effects of cisplatin. High-risk patients for bleomycin in her opinion are those that are older and those with extensive smoking histories. With regards to pulmonary function testing (PFTs) while giving bleomycin, Dr. Bastick notes that she will routinely perform it at baseline, whereas during treatment she does not routinely perform PFTs, unless there is an indication to do so.

This patient subsequently underwent BEP x3 and his post-treatment CT scan demonstrated an overall decent response, but with a persistent retroperitoneal mass with a cystic appearance (3.5 cm). Dr. Lynam posed the following options to the audience as possible next steps in management: (i) second-line chemotherapy, (ii) dog-leg radiotherapy, (iii) RPLND, (iv) surveillance of the mass with repeat CT in 3 months, or (v) FDG-PET.  As follows is the audience response, which was quite varied:

Given that the mass was over 3 cm, the patient ultimately underwent an FDG-PET that was negative for FDG activity in the aforementioned lymph nodes. A surgical opinion in these cases is always important, but in the setting of residual seminoma, an RPLND for these patients is always very challenging.

The second case presented by Dr. Lynam was that of a 33-year-old ex-professional rugby player that presented with retrosternal chest pain, with a subsequent CT scan showing a mediastinal mass with pulmonary metastases. His tumor markers showed an AFP of 130, beta-HCG of 20, and LDH of 240. Dr. Lynam then proposed the following potential interventions to the audience (i) BEP x3, (ii) aggressive resection, (iii) mediastinoscopy, (iv) BEP x4, (v) VIP x4) or (vi) enroll the patient in the ANZUP P3-BEP clinical trial. 36% of the respondents would enroll the patient in the clinical trial, whereas 23% would do a mediastinoscopy with biopsy and 23% would give BEP x4. The patient ultimately underwent a mediastinoscopy + biopsy (embryonal GCT), he received chemotherapy, but ultimately progressed. The audience was then given the following options for the next steps in management: (i) aggressive resection of residual disease, (ii) VIP x 4, (iii) TIP x 4, (iv) TI-CE + stem cell transplant, or (v) enroll on the TIGER study (a randomized phase III trial comparing conventional-dose chemotherapy using paclitaxel, ifosfamide, and cisplatin with high-dose chemotherapy using mobilizing paclitaxel plus ifosfamide followed by high dose-carboplatin and etoposide (TI-CE) as first salvage treatment in relapsed or refractory germ cell tumors). In this setting, 50% of the audience would enroll the patient in the TIGER study, whereas 27% of patients would give the patient TI-CE + stem cell transplant. Because the TIGER study was not available at the time, Dr. Lynam had Dr. James aggressively resect this patient. Dr. James notes that aggressive local resections in this setting is almost becoming a subspecialty among CT surgeons, noting that it is helpful to be comfortable with both cardiac and thoracic surgery when operating on these patients.