(UroToday.com) Dr. Matthew Mossanen, MD, MPH is a urologic oncologist at the Brigham and Women’s Hospital and Dana Farber Cancer Institute in Boston, MA. He is the recipient of the 2020 BCAN Patient Centered Clinical Young Investigator Award for his research-focused smoking cessation in bladder cancer patients.

Smoking is the leading risk factor for developing bladder cancer, with up to 1 in 5 patients continuing active tobacco use at the time of radical cystectomy. Smoking is known to increase the risk of perioperative complications, increase healthcare costs, and even negatively impact cancer-specific and overall survival in bladder cancer patients. Smoking cessation has been identified as a patient-centered priority through the BCAN Patient Survey Network. In a JCO publication from 2018, Dr. Mossanen suggests there is an ethical obligation to include smoking cessation in bladder cancer patient counseling.

The aim of this study was to (1) increase the understanding of patient and provider perspectives regarding smoking cessation and (2) design an intervention for providers to promote smoking cessation. The investigators designed a patient survey administered through the BCAN Patient Survey Network (PSN). A separate provider survey was administered through the SUO and LUGPA groups. The study took place from May until June 2021 and included 308 patients and 103 providers. Patient variables, including sex and stage distribution, generally conformed with those seen in clinical practice.

When former smokers were surveyed, the majority preferred no pharmacologic intervention (ie. they preferred to quit “cold turkey”). Two-thirds of patients had tried to quit previously on more than one occasion, citing the overall health benefits as the most common reason to attempt cessation. Notably, only 57% of patients reported that their urologist discussed smoking cessation as part of their treatment plan. 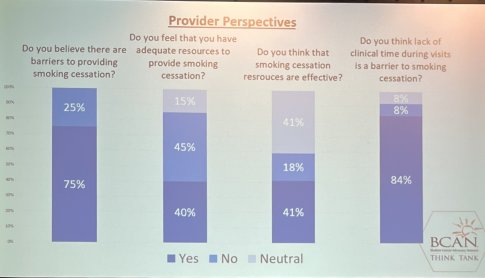 While the majority of providers had never received formal training in smoking cessation methods, 79% reported that they would be interested in pursuing such training.

The investigators concluded that bladder cancer patients use a variety of cessation strategies, and most will attempt quitting on more than one occasion. The “cold turkey” approach is preferred by most patients as they are often motivated by their new bladder cancer diagnosis. Providers identified the lack of time and formal training as the biggest barriers to widespread adoption of smoking cessation counseling. Future efforts should be focused on provider education to provide this invaluable resource to both patients and their family members, as smoking cessation is often a familial, cultural attitude that takes significant buy-in from all stakeholders.

Presented by: Matthew Mossanen, MD, MPH is a urologic oncologist at the Brigham and Women’s Hospital and Dana Farber Cancer Institute in Boston, MA