(UroToday.com) In a podium presentation at the 2022 American Urologic Association Annual Meeting held in New Orleans and virtually, Dr. Walia examined the health and economic implications of concurrent versus stages testicular implant placement for patients undergoing radical orchiectomy for testis cancer. Discussion of placement of a testicular prosthesis is recommended in American Urological Association guidelines, though utilization is relatively low. The authors, therefore, assessed outcomes and care utilization between the concurrent implant (CI) and staged implant (SI) insertion after radical orchiectomy.

To do so, they used to MarketScan Commercial claims database from 2008 to 2017 to identify men 18 years and older who underwent radical orchiectomy for testicular tumors. Patients were then divided into three groups: orchiectomy with no implant, CI, or SI (any time post-orchiectomy). The authors then examined 90-day rates of reoperation, readmission, emergency department (ED) presentation, and outpatient visits.

Overall, the author identified 8803 men who underwent radical orchiectomy in the dataset. The vast majority (8564) did not have a prosthesis placed while 190 had one placed concurrently and 49 had one placed in a staged fashion. There were no differences in age, Charlson comorbidity index, benefit plan, additional cancer treatment, or metastasis between these groups. 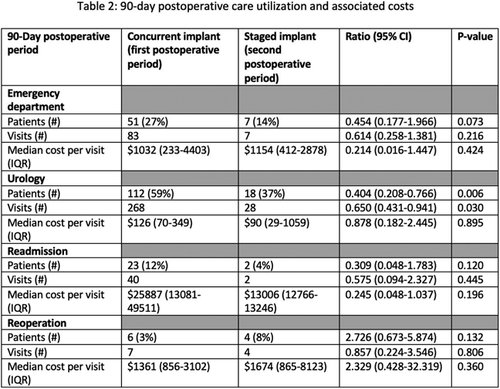 The authors, therefore, conclude that concurrent prosthesis placement, in the small proportion of patients who opt for a prosthesis, is associated with less total perioperative cost, lower explant rate, and similar postoperative utilization compared to a staged approach.