(UroToday.com) The 2022 Engineering and Urology Society included a presentation featuring the work of Mr. Sina Soltanzadeh Zarandi and colleagues regarding the result of their study assessing the efficacy of the latest irritation of the MultiphzeTM enclosed irrigation system (Multiphze LLC) in evacuating a clot-filled bladder in an in-vivo porcine model (Figure 1). Current bladder irrigation techniques for clot evacuation can be associated with an increased risk of blood and urine contamination, are burdensome, and are often inefficient. At EUS 2022, Mr. Sina Soltanzadeh Zarandi and colleagues demonstrated the efficacy of the MultiphzeTM self-contained bladder irrigation system to evacuate a clot-filled bladder in a porcine model when compared to the commonly used Bard Irrigation Kit (BIK).

In this animal study, two female, juvenile, Yorkshire pigs were anesthetized. Thereafter, 100 ml of blood was drawn via a femoral vein and mixed with 44.4 ml of Glow-Bright Concentrate. The bladders were then drained using a 24 Fr 6 eye hematuria urinary catheter. Finally, the 100 ml of blood and Glow-Bright Concentrate mixture was instilled into the bladder using a BIK. After 5 minutes, 4 postgraduate urologists with prior experience using a BIK were randomized into two groups and performed bladder irrigation with 3 L of sterile water utilizing both the BIK technique and the MultiphzeTM system in two separate trials. The two groups differed in the sequence they used the BIK technique vs. the MultiphzeTM system. The two different techniques were evaluated based on the duration of each irrigation cycle, the fluid clarity achieved following each irrigation cycle, as well as the total area of fluid spillage on the procedural field at the conclusion of bladder irrigation (Table 1). 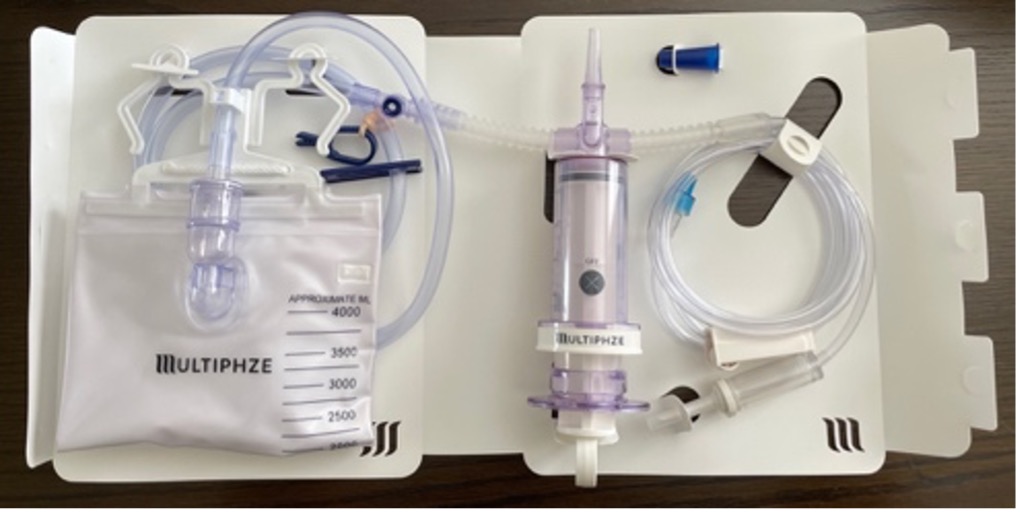 Mr. Sina Soltanzadeh Zarandi concluded his presentation on the In Vivo Porcine Evaluation of the MultiphzeTM Device with the following statement: