(UroToday.com)  The 2022 Annual Meeting of the American Urological Association was host to a podium session of surgical therapies in localized prostate cancer. Dr. Giorgio Gandaglia presented results of his group’s work evaluating the role of 68 Ga-PSMA PET/CT for the pre-operative lymph node staging in patients undergoing a radical prostatectomy.

Dr. Gandaglia began his presentation by noting that the role of PSMA PET/CT in the primary staging for patients with prostate cancer is still debatable. Metaanalyses have demonstrated that in studies where LN involvement prevalence ranged between 5 and 20%, the negative predictive value of PSMA PET/CT remained steadily above 90%. Although previous studies suggested a high NPV in intermediate risk patients, the variation of FN rate according to the prevalence of LN invasion based on pre-operative risk assessment has never been tested.

The aim of this study was to explore the variation of FN rates in a consecutive cohort of men receiving preoperative PSMA PET. The authors identified 90 patients evaluated with 68 Ga-PSMA PET/CT before RP and extended LN dissection between 2019 and 2021 at two referral centers. The main outcome was the FN rate. To test the correlation between the pre-operative LN risk and FN rate, the Briganti nomogram was utilized. The association between the pre-operative LN risk and FN rate was further assessed using logistic regression analyses and the Lowess function.

The baseline patient characteristics are displayed below. Median pre-operative LN involvement risk was 31% (IQR 17-52%). 30 patients had a positive PSMA PET/CT. The FN rate was 22%.

On a per patient basis: PSMA PET/CT showed:

On logistic regression analysis, a higher pre-operative LN risk, per the Briganti nomogram, was significantly associated with an increased risk of a positive PET/CT finding (HR 1.36, p=0.02). At Lowess analysis, the NPV progressively increased with higher LNI risk. Notably, FN rates remained equal or lower 10% in patients with a low risk of LNI (< 15%). 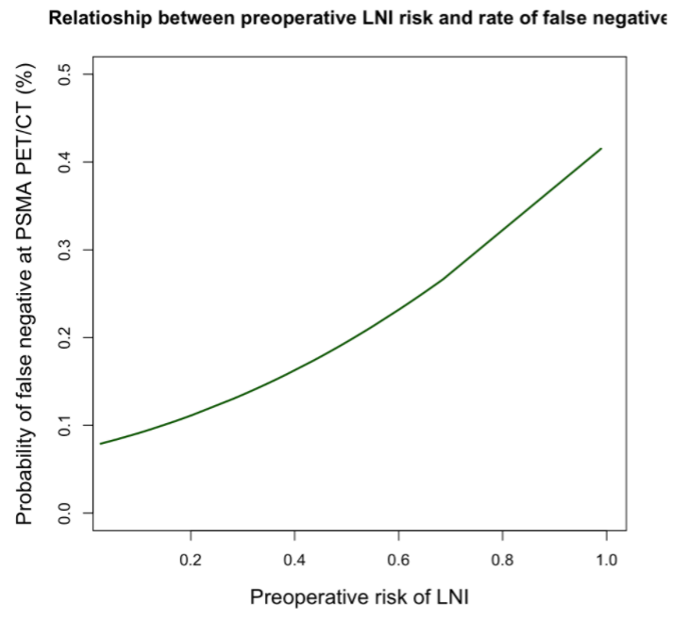