(UroToday.com) In a moderated poster presentation at the 2022 American Urologic Association Annual Meeting held in New Orleans and virtually, Dr. Hird presented results of a population-based analysis of the prevalence and natural history of non-metastatic castration-resistant prostate cancer (nmCRPC). While there have been rapid changes in this disease space in the past few years with the introduction of the novel hormonal agents apalutamide, darolutamide, and enzalutamide, the landscape of nmCRPC has not been well characterized.

Thus, the authors performed a retrospective population-based cohort study of men with nmCRPC in Ontario, Canada. The authors included patients with nmCRPC based on the following definition: a diagnosis of prostate cancer, castrate level of testosterone (<1.7 nmol/L) and a PSA >2.0 nmol/L with a subsequent rise >25% from the nadir, and without diagnostic or treatment codes for metastasis. They then calculated the annual prevalence of nmCRPC. Further, they examined the crude time from nmCRPC to metastasis and death. Univariable and multivariable Fine and Gray subdistribution hazard models were used to identify predictors of time from nmCRPC to prostate cancer death while accounting for the competing risk of non-prostate cancer death.

The median time from primary treatment to the diagnosis of nmCRPC was 6 years (IQR: 3-10). The median PSA at the time of meeting nmCRPC criteria was 3.0 ng/L. Following the diagnosis of nmCRPC, patients were followed for a median 31.1 months (IQR: 19.8-47.9). During this time, the overall annual prevalence of nmCRPC ranged from 1,519-1,913 patients, representing 7-12% of men with prostate cancer prescribed androgen deprivation therapy each year. The crude median time from nmCRPC to all-cause death was 37.6 months (IQR: 22.1-55.4). Median time from nmCRPC to metastasis and metastasis to all-cause death was 20.0 and 8.3 months, respectively. These durations differed somewhat on the basis of the initial treatment approach that patients received with longer time from nmCRPC or metastasis to death seen among patients initially treated with surgery, likely reflecting their younger age and better overall health. 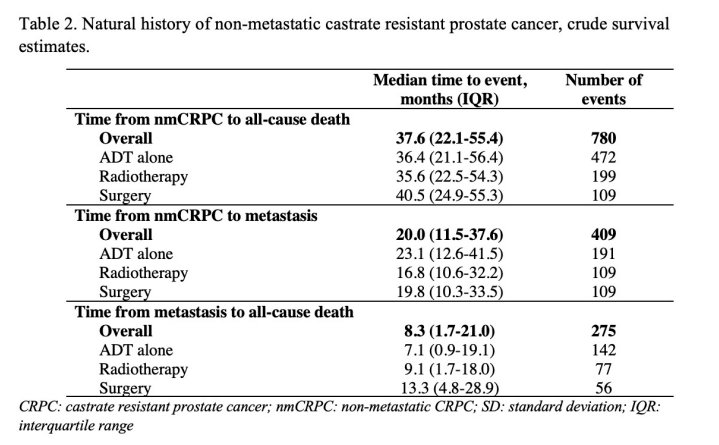 On regression analysis, the authors identified that older patients, patients who had a higher PSA at the time of meeting nmCRPC criteria, and patients with grade group 4-5 disease had a shorter time from nmCRPC to prostate cancer death.

The authors conclude that this, the largest analysis of the prevalence and natural history of nmCRPC, may be used as a historical comparison as this field rapidly evolves with the introduction of novel treatment and imaging approaches.