To evaluate this further, the authors examined a cohort of 8,362 patients treated with radical prostatectomy at a single center between 1987 and 2020. Among these 8,362 men, 1,328 had adverse pathology features (i.e. Gleason Grade [GG] 4-5 with ≥pT3a stage and/or lymph node invasion [LNI]). The authors further restricted their analytic cohort to patients with follow-up >36 months, absence of PSA persistence following surgery, and ≤6 positive nodes were included (n=682). Patients were stratified according to treatment with adjuvant RT vs. observation with or without salvage RT. The primary endpoint was overall mortality (OM) and the authors used multivariable Cox regression models to assess the association between adverse pathology features on OM. Based on Cox-derived coefficients, a score was assigned to each adverse pathology feature (1 point for pT3b; 2 for GG 5 or 1-2 positive nodes; 3 for >2 positive nodes). Patients were stratified in low (0-1 points), intermediate (2-3 points) and high (4-5 points) risk groups. The probability of receiving adjuvant RT was weighted using an inverse-probability of treatment weighting propensity score adjusted for the presence of positive surgical margins, PSA, year of surgery and age. The resulting weight was used as propensity adjustment in multivariable Cox regression models examining the impact of adjuvant RT on OM after adjusting for age, salvage RT and adjuvant or salvage hormonal therapy (HT), with each risk group tested independently. 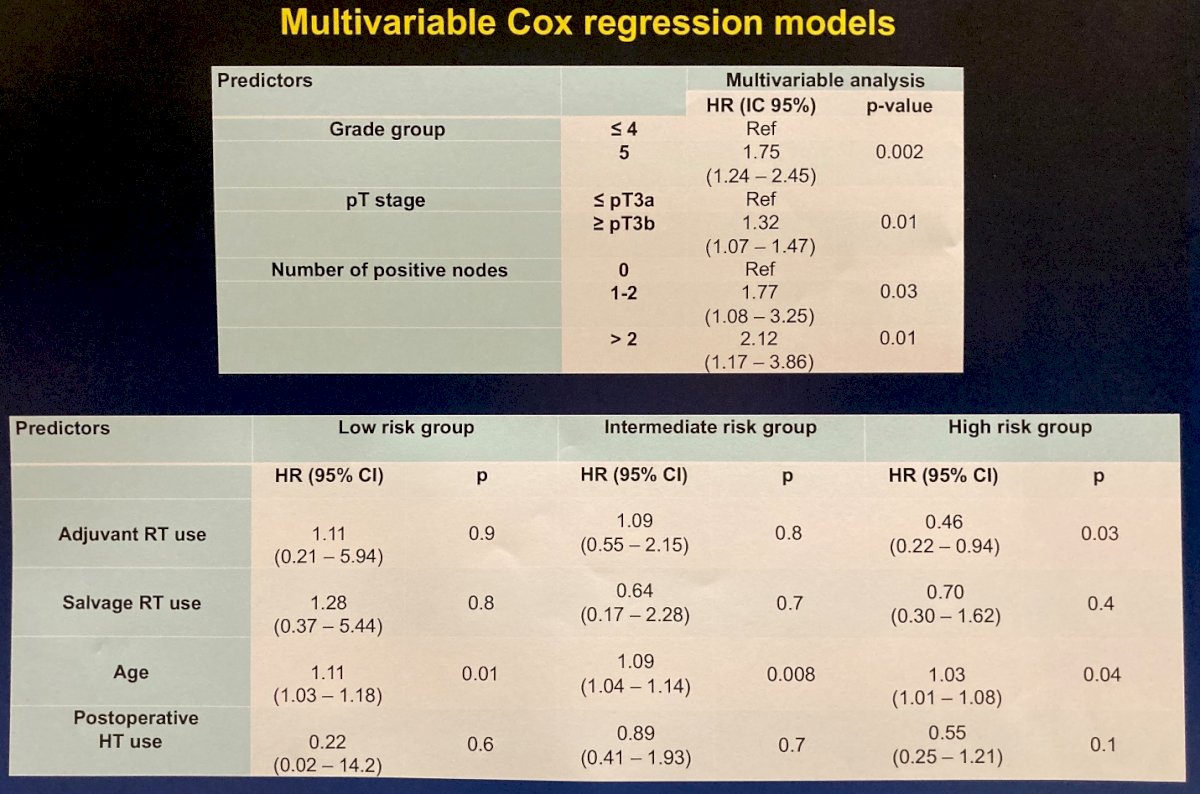 Cox-derived Kaplan Meier analyses demonstrated no differences in 10-year OM-free survival between low and intermediate risk patients (all p=0.2) who were treated with adjuvant RT or observation with or without salvage RT. However, in the high-risk group, use of adjuvant RT was associated with significant improvement in 10-year OM-free survival compared to observation +/- salvage RT (86 vs 73%, p=0.04).

Thus, the authors conclude that, among patients with adverse pathology features, they were able to identify three subclassification of risk. Only among those with high-risk characteristics did an adjuvant RT approach appear to provide a survival benefit compared to observation with or without salvage RT.