(UroToday.com) In a moderated poster presentation at the 2022 American Urologic Association Annual Meeting held in New Orleans and virtually, Dr. Boris Gershman presented on behalf of Dr. Schaufler to discuss the role of immediate radiotherapy in patients with evidence of nodal spread following radical prostatectomy for prostate cancer. The optimal management of these patients who are found to have node positive disease (pN1) at the time of radical prostatectomy is uncertain.

Randomized evidence to support the use of early, life-long androgen deprivation therapy (ADT) though this practice is not widely followed in part due to concerns regarding the generalizability of the study cohort to modern practice was provided. Recent trials of early salvage radiotherapy included only a minority of pN1 patients, leaving a data vacuum. These authors, therefore, emulated a hypothetical pragmatic trial of immediate (adjuvant) radiotherapy versus observation in men with pN1 prostate cancer.

To do so, they used the design of the RADICALS-RT trial to inform the design of a hypothetical target trial. Thus, they identified men aged 50-69 years with pT2-3 Rany pN1 M0 prostate cancer with an initial pre-treatment PSA <50 ng/mL in the NCDB from 2006-2015. To be included patients had to either be treated with 60-72 Gy of adjuvant RT (aRT) ± ADT within 26 weeks of RP or undergo observation.

The authors derived a propensity score for receipt of aRT, and then used stabilized inverse probability of treatment (sIPW) re-weighting to estimate absolute and relative treatment effects for adjuvant RT.

The authors included 3,510 patients, of whom 587 (17%) received aRT (73% with concurrent ADT). Over a median follow-up of 42.3 months, 333 deaths occurred. After sIPW re-weighting, baseline characteristics were well-balanced between those patients who received adjuvant RT and those who underwent observation. 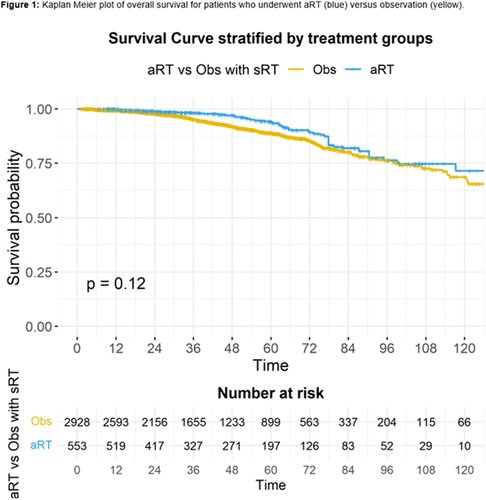 While adjusted overall survival was higher for patients receiving adjuvant RT compared to observation at 94% versus 89% at 5-years and 82% versus 80% at 8-years, this did not reach statistical significance (p=0.12).

Similarly, in IPW-reweighted Cox regression modelling, adjuvant RT was associated with a lower risk of all-cause mortality than observation, but this did not reach statistical significance (HR 0.71, p=0.06).