(UroToday.com) The 2022 Annual Meeting of the American Urological Association was host to a panel discussion of the best prostate biopsy techniques in 2022. This session was moderated by Dr. Daniel Barocas with Drs. Arvin George, Benjamin Ristau, Kristen Scarpato, and Samir Taneja as the panel speakers.

Dr. Arvin George was tasked with advocating for the transrectal ultrasound (TRUS)-guided prostate biopsy, although he estimates that ~95% of prostate biopsies done in his practice are via the transperineal (TP) approach. When considering the choice of TRUS versus TP biopsy, one must consider cost and cost-effectiveness, efficiency, patient experience, infectious complications and other adverse outcomes, and cancer detection rates. The costs of TP biopsy are considerable:

Although TRUS biopsy is known to be associated with increased infectious complications, a meta-analysis of 4,280 patients by Xue et al. published in Oncotarget in 2018 demonstrated no difference in overall biopsy-related complications. From a patient experience perspective however, TP biopsies were associated with significantly more discomfort (VA pain scale of 4.0 for TP versus 2.0 for TRUS biopsy). Based on data from the Michigan Urological Surgery Improvement Collaborative (MUSIC) registry, it appears that these increased pain scores are most likely a result of increased pain from anesthetic administration at the time of TP biopsy (3.45 versus 1.96). In the MUSIC registry, the overall pain was also higher in the TP patients (3.50 versus 2.73), with the most painful part of the biopsy procedure being the local anesthetic administration, compared to probe insertion with TRUS biopsies. 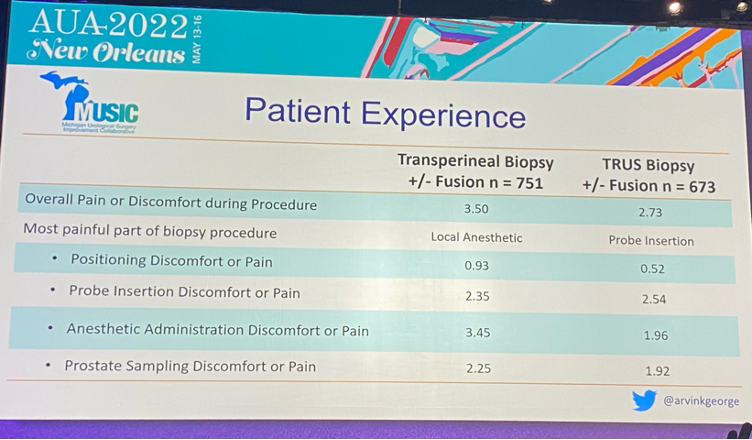 Next when considering adverse outcomes, results from MUSIC confirm that infectious hospitalizations were non-significantly higher in the TRUS arm (0.6 versus 0.33, p=0.11). However, non-infectious hospitalizations (e.g. bleeding, retention) were significantly higher in the TP arm (0.38 versus 0.18, p=0.04). Dr. George concluded his discussion by stating that both TP and TRUS prostate biopsies were viable options and choice of one versus the other rests with a shared decision-making process between the patient and treating physician.

Next, Dr. Ristau advocated for TP biopsy in the diagnosis of PCa. He began his talk by highlighting work by Takenaka et al. that randomized 100 patients to 12 core TP versus 12 core TRUS biopsy. The cancer detection rates were non-significantly different (47% TP and 53% TRUS), even when stratified by PSA level and PSA density. Similar work by Guo et al. of 339 patients similarly found no difference in overall or grade-specific cancer detection rates. With the overall cancer detection rates being similar, the question of improved anterior/apical tumor detection with the TP technique was addressed. Hossack et al. evaluated 1,132 radical prostatectomy specimens (414 diagnosed via TP and 718 via TRUS). More “anterior” only tumors were detected using TP (16%) compared to TRUS (12%, p=0.046). “Anterior only” tumors detected via TP biopsy were smaller (1.4 ml versus 2.1 ml, p=0.03) and of less advanced stage (EPE: 13% versus 28%, p=0.03).

Dr. Ristau next addressed the issue of increased infectious complications with the TRUS approach. The current update of the AUA White Paper on the Prevention and Treatment of the more common complications related to prostate biopsy reports infectious complication rates ranging from 0.1-7%, with sepsis admission rates ranging between 0.3 and 3.1%. Currently, 10-22% of patients harbor bacteria with fluoroquinolone resistance and these patients are at a four-fold increased risk of infectious complications. Dr. Ristau emphasized the importance of maintaining antibiotic stewardship by minimizing the amount of prophylactic antibiotics used. With the TP approach, the sepsis readmission rates were only 0.076% in a recent systematic review. The question becomes whether antibiotic prophylaxis is needed at all in patients undergoing a TP biopsy. A meta-analysis of 3,662 patients undergoing TP biopsy, 2,368 of whom received antibiotics and 1,294 whom did not, demonstrated no significant difference in post-biopsy fever, GU infections, sepsis and infectious readmission rates regardless of whether patients had received antibiotic prophylaxis or not. These results were similarly corroborated in a meta-analysis of 42,577 patients by Basourakos et al.

With regards to pain with the TP approach, Dr. Ristau highlighted work by Dr. Andrew Loblaw’s group that demonstrated that mean VAS score remains less than three throughout the various steps of the TP biopsy. One can further augment pain control with a pudendal nerve block, in addition to the standard periprostatic block.

Taking a step back and looking at the overall picture, it appears that the focus in the TP biopsy space is to focus on:

In comparison, the focus in the TRUS space is to focus on:

In Dr. Ristau’s opinion, the medical community must veer away from approaches that would conflict with current antibiotic stewardship recommendations, which is another argument against TRUS biopsies.

Next, Dr. Scarpato advocated for the role of MRI in the diagnosis of prostate cancer. The goals of prostate biopsies are:

Multiparametric MRI (mpMRI) may have some use as an aid in diagnosis and provides excellent anatomic and functional detail. PI-RADS v2.1 simplifies the acquisition, interpretation and reporting of lesions.

Early data from Dr. Pinto’s group at the National Cancer Institute compared MRI/US fusion-guided biopsy with US-guided biopsy alone for the diagnosis of prostate cancer in 1,003 men with elevated PSA or an abnormal rectal exam. Targeted biopsies diagnosed 30% more high-risk cancers and 17% fewer low-grade cancers.1 Results from the PROMIS trial which enrolled 740 men, 576 of whom underwent a 1.5 Tesla mp-MRI followed by both a TRUS-biopsy and TP mapping/saturation biops, demonstrated that 27% of biopsies could be avoided with a negative mp-MRI and MRI guidance is associated with increased detection of 18% more cases of clinically significant cancer. The sensitivity of MRI was significantly higher than that of TRUS biopsy (88% versus 48%) at the cost of reduced specificity (45% versus 99%).2 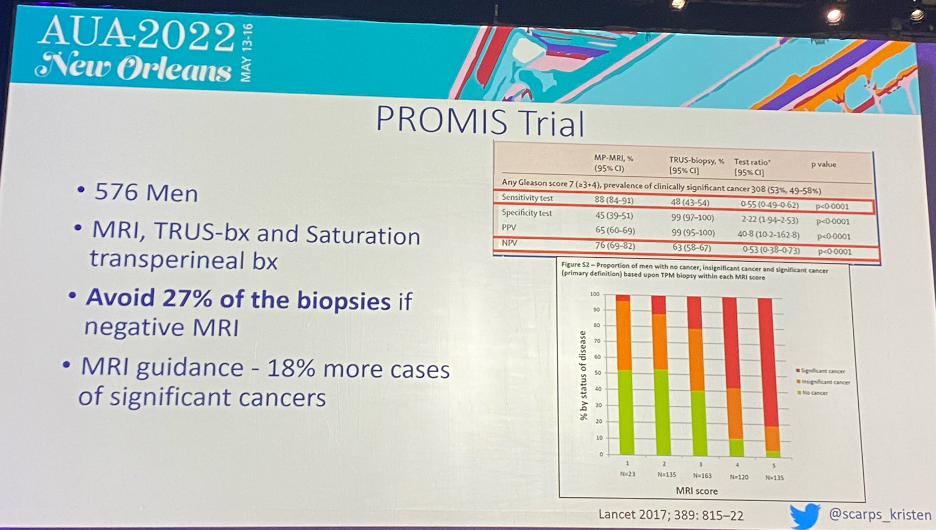 The non-inferiority PRECISION trial, which enrolled 500 biopsy-naïve men to mp-MRI followed by targeted biopsy alone if positive or no biopsy if MRI was negative versus 10-12 core TRUS-guided biopsy demonstrated improved detection of clinically significant prostate cancer (Grade Group Two disease or higher): 38% versus 26%. There was decreased detection of clinically indolent cancer in the MRI group: 9% versus 22%. Importantly, 28% of men in the MRI group avoided a biopsy.3 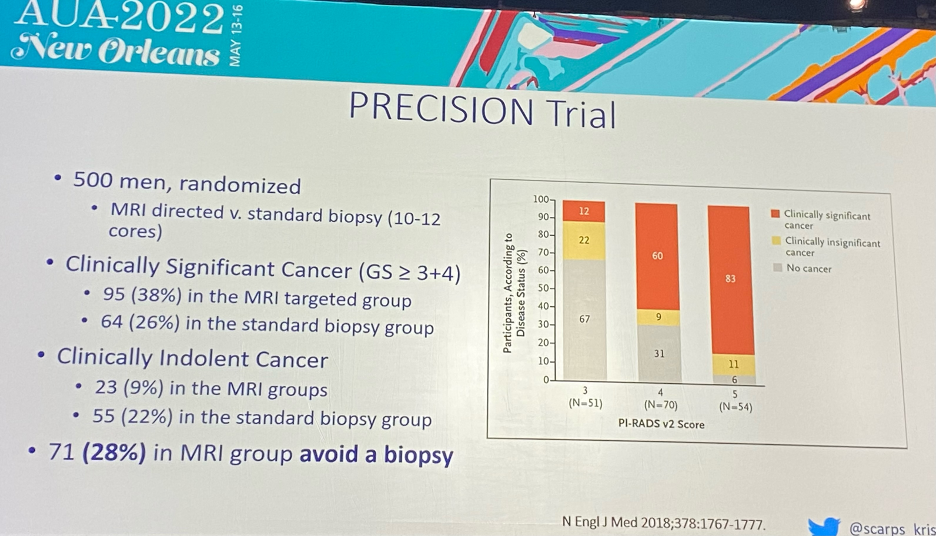 A recent Canadian phase three trial led by Dr. Klotz similarly evaluated MRI-targeted biopsies in patients with PI-RADS 3 or greater lesions versus 12-core systematic TURS biopsy in 453 biopsy-naïve patients with a Prostate Cancer Prevention Trial (PCPT) risk of 5% or greater for Grade Group Two disease. Biopsy was avoided in 37% of men in the MRI group. Detection of clinically significant cancer was non-significantly superior in the MRI targeted group (35% versus 30%), with fewer insignificant cancers and fewer adverse events.4 Findings from these studies have been reflected in the latest NCCN guidelines. 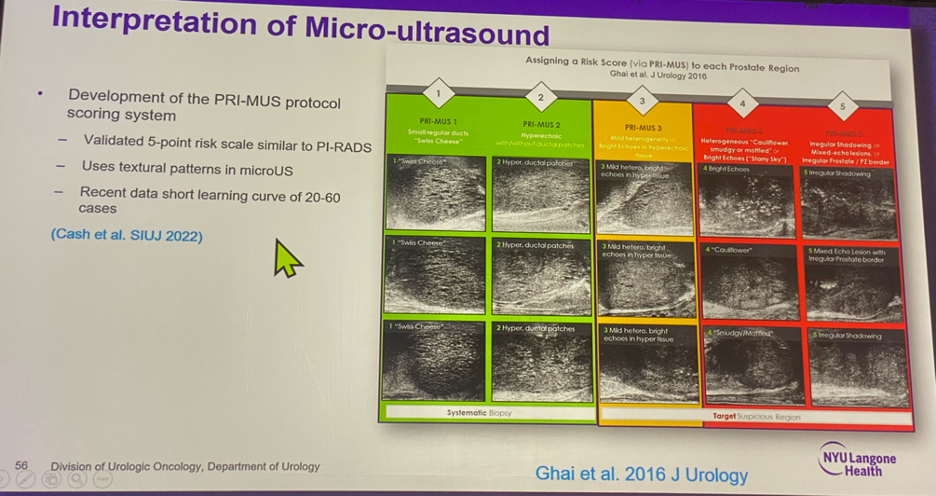 Dr. Scarpato concluded her talk with the following recommendations:

Next, Dr. Samir Taneja discussed the role of micro-ultrasound targeted prostate biopsy. Although MRI has revolutionized the current landscape of prostate biopsies, MRI quality varies widely due to high inter-observer variability and inconsistent image quality by center/scanner. Issues with access remain, and this modality is not for everyone due to claustrophobia, hip implant artifact, or medical contraindications. There is also a significant cost associated with the MRI, fusion platforms and cost/patient time spent in additional visits. Thus, there remains a desire for alternatives to reduce cost and increase access.

Microultrasound is a high frequency transrectal ultrasound producing improved tissue resolution. It operates at 300% higher frequency (17-29 MHz versus 6-12 MHz) and the resolution is down to 70 microns, allowing most prostate ducts and tissue patterns to be visualized. Similar to conventional ultrasound, it can be used for TRUS or TP biopsies, with or without MRI fusion and for large prostates (>200cc).

Similar to the PI-RADS score for mp-MRI, the PRI-MUS protocol scoring system has been developed for the interpretation of microultrasound. It is a validated 5-point risk scale that uses textural patterns in microultrasound with a relatively short learning curve (20-60 cases). 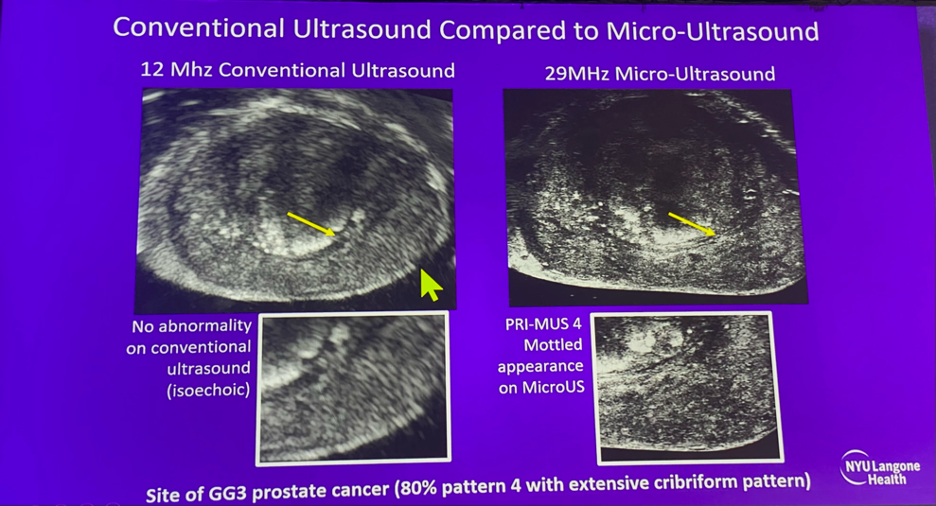