(UroToday.com) In a podium presentation at the 2022 Society of Urologic Oncology Meeting held in conjunction with the American Urologic Association Annual Meeting held in New Orleans and virtually, Dr. Stephen Boorjian presented on tips and tricks in inferior vena cava (IVC) thrombectomy. He began by highlighting the importance of the pre-operative imaging evaluation for patients with IVC thrombus. He suggested magnetic resonance imaging (MRI), and in particular MRV has notable value in assessing the height of the thrombus. Further, it allows evaluation and distinction between tumor thrombus and bland thrombus. Bland thrombus, made of platelets, characteristically does not enhance on the MRI and is often found in the infra-renal IVC. For patients in whom bland thrombus is identified, immediate anticoagulation is recommended to prevent its propagation. 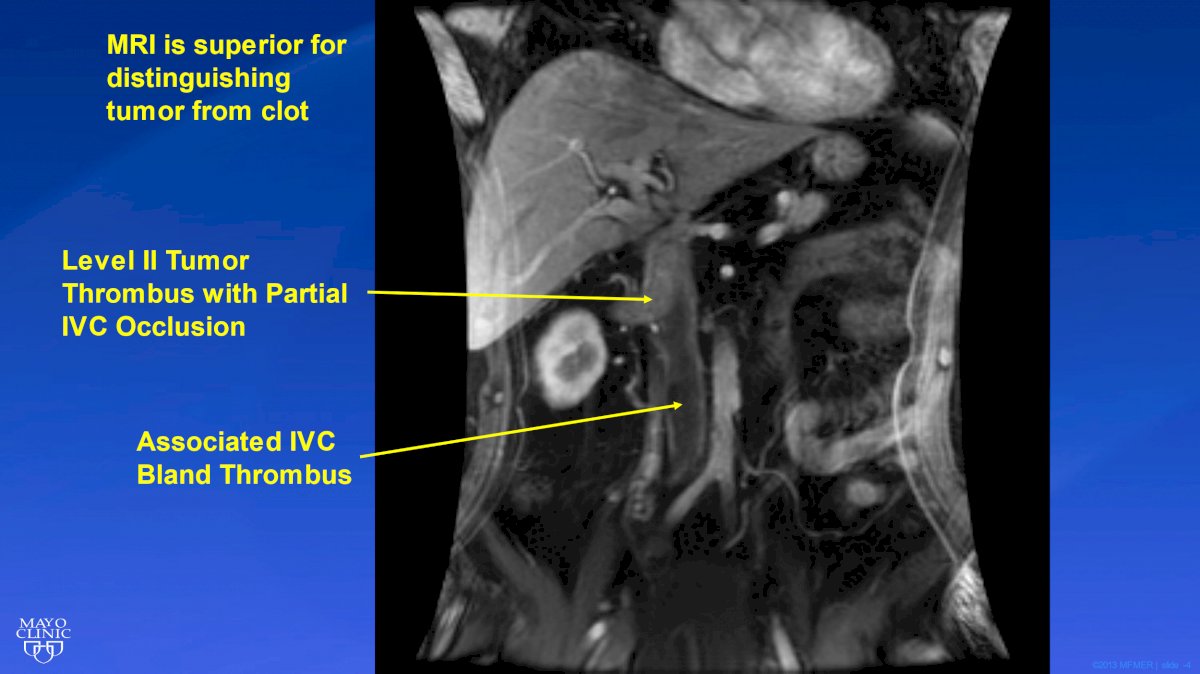 Providing images of sequential MRI scans performed 20 days apart, he noted that tumor thrombus can progress rapidly (including for example from level III to level IV). Thus, recent imaging (within a week of the operative date) is critical. In terms of pre-operative optimization, he noted that anticoagulation should be considered in patients with bland thrombus, those with VTE events, with complete or near occlusion of the IVC, and those with a level IV thrombus. However, he noted that IVC filter placement pre-operatively is not recommended as this significantly complicates intra-operative management.

Highlighting a small series from Dr. Margulis examining the effect of targeted molecular therapies on the level of caval thrombus in the tyrosine kinase era, he noted than 3 of 25 patients had a decrease, 1 had an increase, and 21 patients had a stable thrombus. Among these 25 patients, only 1 had a change in the surgical approach. However, looking forward, he highlighted three small studies examining potential pre-surgical therapies including immune checkpoint inhibitors and neoadjuvant SABR radiotherapy. While the data are limited so far, surgery is safe and feasible following these neoadjuvant approaches.

Considering the level I thrombus, he highlighted the need for care. While the idea of “milking it back into the renal vein” may be appealing, he emphasized that this may dislodge the thrombus or leave an inadequate renal vein stump to secure. In doing so, these techniques may risk turning a manageable case into something much more difficult to manage. Further, use of a side-biter may risk narrowing the IVC or leave an inadequate lip of posterior IVC to sew.

Thus, he suggested that it is “ok to make a big deal” of a case, taking the formal approach of isolating and clamping the infrarenal IVC, contralateral renal vein, and suprarenal IVC before ligating the renal artery. He noted the importance of being purposeful in terms of ligating short hepatic veins when necessary and in terms of the sequence of applying and removing the venous clamps. 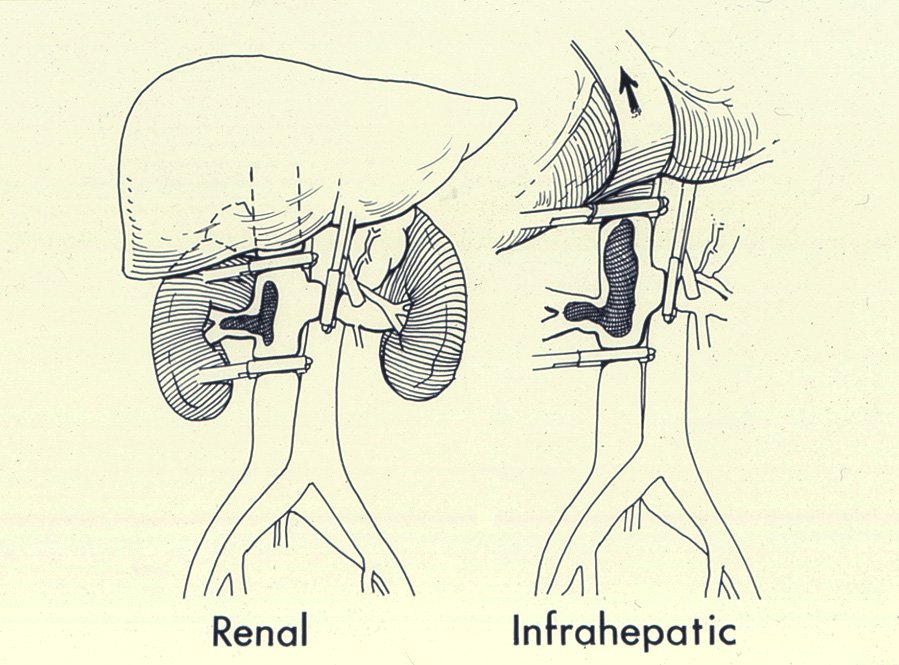 Highlighting work done at Mayo with Dr. Blute and others, he noted a treatment algorithm they developed for IVC management as a result of the degree of IVC occlusion and presence of bland thrombus. These clinical situations were associated with different suggested management. 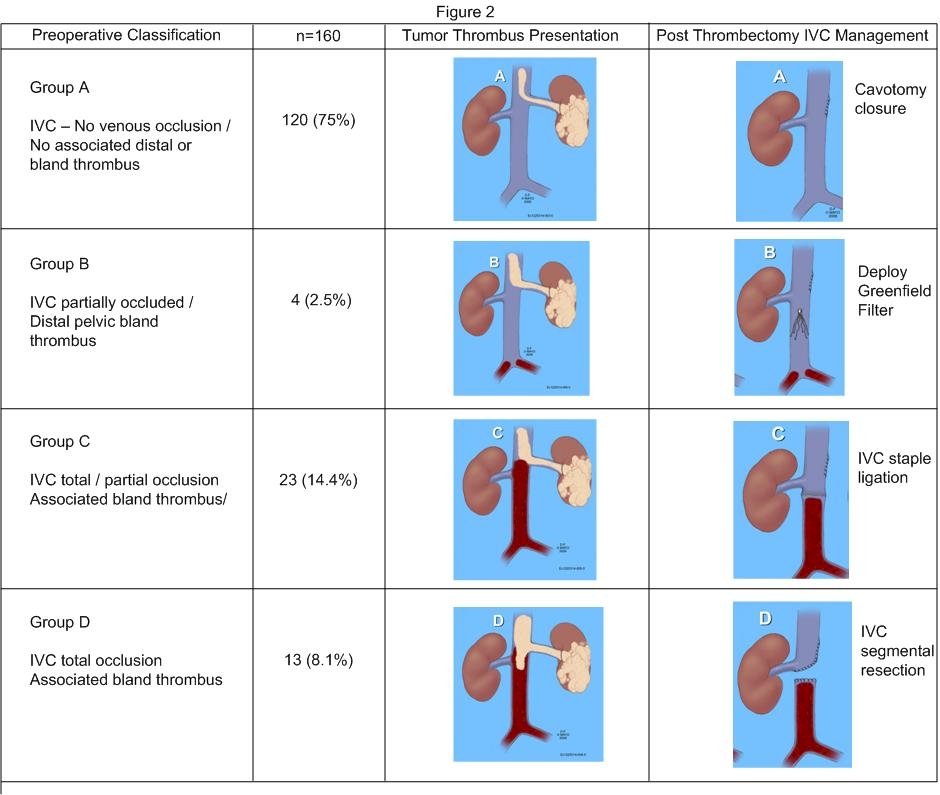 In this schema, patients in group D have total IVC occlusion with associated bland thrombus and may have unclear margins. In this case, IVC resection and ligation is the suggested management approach. Using intra-operative photos, he highlighted that this may be performed with either a sewn or stapled closure.

More recent work from the Mayo group identified features predictive of the need for IVC resection pre-operatively, on the basis of MRI. These included an IVC AP diameter exceeding 24mm at the level of the renal vein ostium, complete occlusion of the IVC at the renal vein ostium, and a right sided tumor. Taken together, patients with 0 features had a 4% chance of IVC resection while this rose to 9%, 24%, and 68% for patients with 1, 2, or 3 features, respectively. When IVC reconstruction is required as in cases where it is needed to achieve complete removal of the intraluminal thrombus or when tumor is infiltrating into the vein wall, Dr. Boorjian noted that a patch is preferred over a graft if possible.

Dr. Boorjian noted the importance of teamwork in managing patients with RCC and IVC thrombus. Highlighting Canadian data published by Paul Toren, 75% of all mortalities in patients undergoing IVC thrombectomy occurred in the first two cases a surgeon performed. Increasing surgeon volume was associated with lower in-hospital mortality. Therefore, he noted that there is “zero downside” to loading the boat and suggested that vascular and hepatobiliary surgeons are particularly valuable colleagues in these cases.

In conclusion, he highlighted that careful preoperative preparation is critical for these patients with the importance of timely, high-quality imaging and anticoagulation in select patients. The role of neoadjuvant therapy in patients without metastatic disease remains to be established. However, from a surgical approach, it is critical not to take shortcuts on the level I thrombus and to use the degree of IVC occlusion and presence of bland thrombus to guide decision making.

Presented by: Stephen A. Boorjian, MD, Carl Rosen Professor and Chair of the Department of Urology as well as the Director of the Urologic Oncology Fellowship at Mayo Clinic.