(UroToday.com) The 2022 Annual Meeting of the American Urological Association was host to a panel discussion about the optimal management of an incidentally discovered 3 cm solid renal mass. This panel discussion was moderated by Dr. Costas Lallas with Drs. Brian Lane, Lee Ponsky and Jaime Landman as panelists.

Dr. Lallas began his presentation by highlighting an analysis from the SEER database (1975-2009) that has shown an annual increase in the incidence of kidney cancer diagnoses, with most of this increase secondary to an increased incidence of localized kidney cancer. 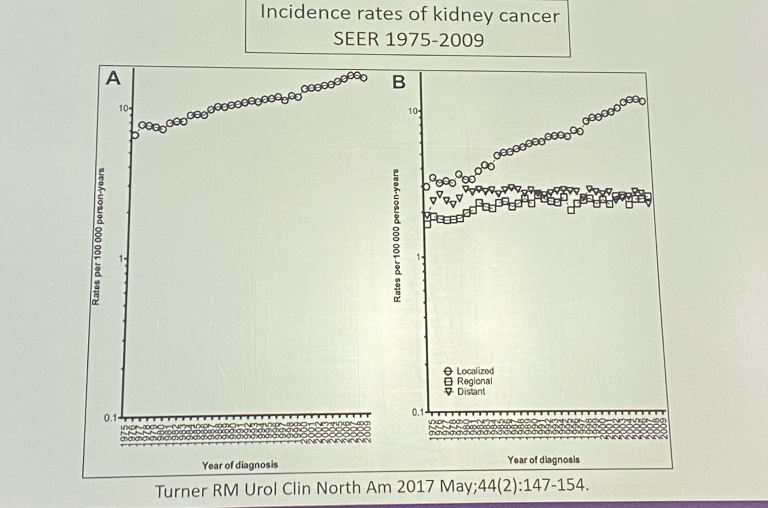 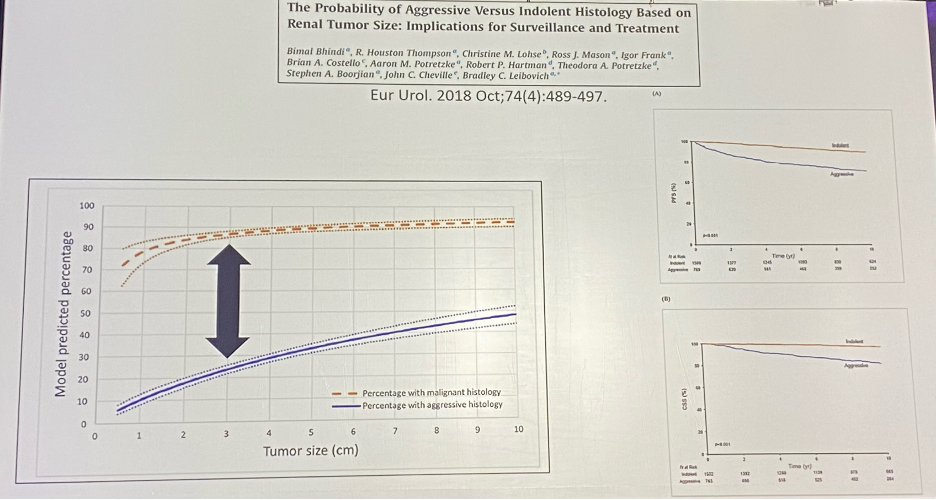 Studies from the Cleveland Clinic have previously evaluated the benefit of surgical treatment of cT1 renal masses in patients 75 years of age or older. After a median follow-up of almost four years, cardiovascular death (29%) was the most common cause of death and cancer progression was responsible for only 4% of deaths. Patients managed with active surveillance (AS) versus nephron-sparing or radical nephrectomy had no significant difference of in overall death rates, even after adjustment on multivariable analyses, suggesting that surgical treatment may not always be necessary for such patients.

Next, results from the Hopkins group evaluating the diagnostic accuracy and risk of biopsy in the diagnosis of a renal mass were presented. A meta-analysis of 20 studies and 3,113 biopsies of masses <5 cm demonstrated a sensitivity of 96.3%, specificity of 96.0%, PPV of 99.6% and NPV of 72.7% with a very low rate of clinically significant complications. The authors concluded that clinicians and policy makers should strive to identify patients most likely to benefit from biopsy and where it might change management.1

Results from the Michigan Urological Surgery Improvement Collaborative (MUSIC) published recently in European Urology demonstrated that renal mass biopsy was utilized for 15.5% of masses <7 cm. A biopsy was more likely to be performed in patients with more comorbidities and larger tumor size. Non-malignant pathology rates improved from 13.4% without a biopsy to 5.0% in patients who underwent a renal mass biopsy. Specifically in patients undergoing a radical nephrectomy, the non-malignant pathology rate was 2.7% with renal mass biopsy and 9.0% in patients without a biopsy. Results of the biopsy were also hugely predictive of treatment choice with 95% of patients with a benign biopsy opting for observation and none undergoing radical nephrectomy.2 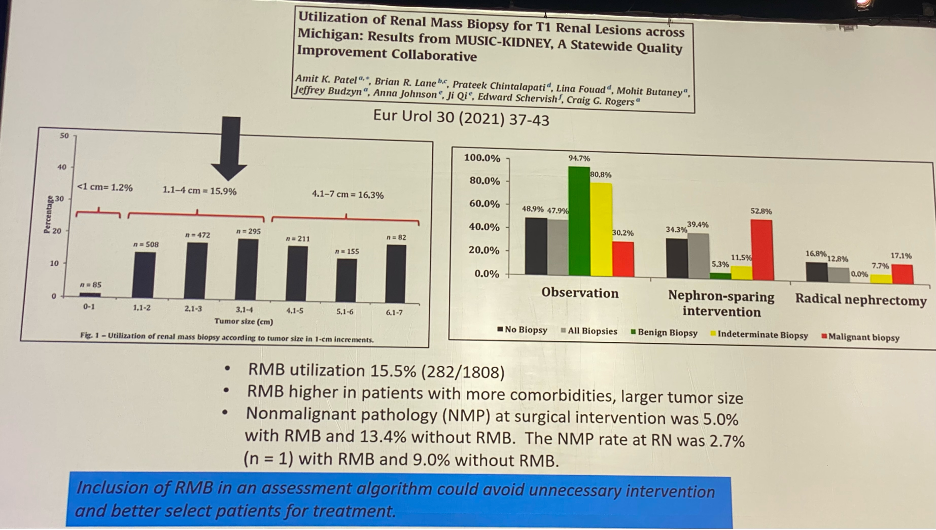 Dr. Lane was next tasked with presenting the arguments in favor of surgical treatment of incidentally discovered 3cm solid renal masses. He began by emphasizing the importance of individualized treatment with patient factors, tumor factors, and prediction models crucial in the decision-making process. One needs to consider the expected outcomes, patient preference and follow available guidelines. The current AUA guidelines state:

What are the benefits of partial nephrectomy for a 3 cm renal mass?

What are the risks of partial nephrectomy for a 3 cm renal mass? 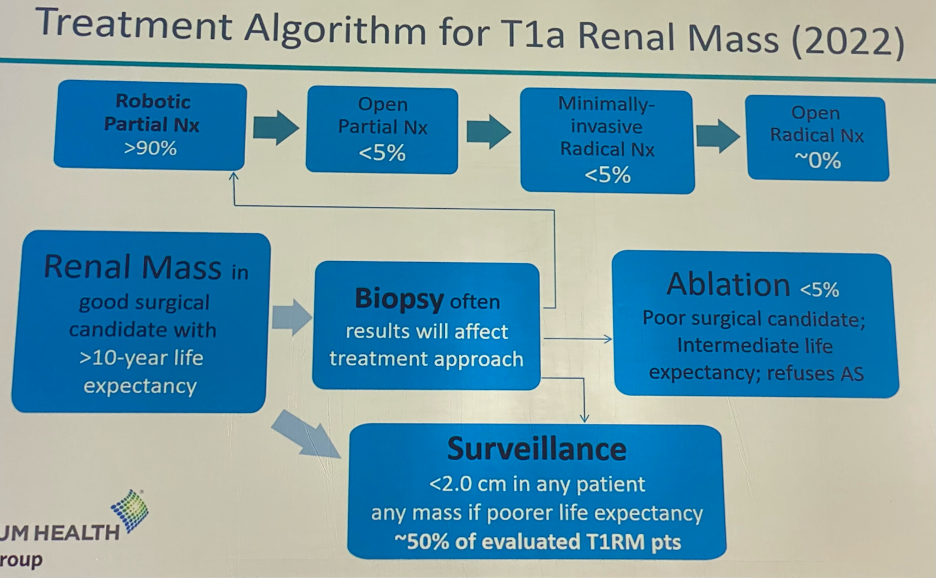 Dr. Ponsky next discussed the role of renal radiosurgery in the management of small renal masses. He began by attempting to debunk the myth that kidney cancer is radioresistant. This historically was likely secondary to the dosage and radiotherapy technique utilized. However, with stereotactic ablative radiotherapy (SABR) this has become feasible. The role of SABR/cyber knife has long been prominent in the treatment of CNS renal metastatic lesions by neurosurgeons and thus its potential in the treatment of renal cancers was explored further by Dr. Ponsky. In 2003, Dr. Ponsky used swine models to evaluate treatment effects of cyberknife for extracorporeal renal tissue ablation with excellent ablative results and minimal surrounding inflammation/distortion of renal parenchyma. In 2015, Ponsky et al. published results of a phase 1 dose-escalation study of stereotactic body radiotherapy (SBRT) for poor surgical candidates with localized renal cell carcinoma and demonstrated that dose escalation to 48 Gy in 4 fractions is feasible without dose-limiting toxicities. A pooled analysis of SABR for 223 primary renal cell carcinomas from the International Radiosurgery Oncology Consortium for Kidney (IROCK) demonstrated a five year cancer specific survival of 91.9% and local control rate of 97.8%. A meta-analysis of 383 patients similarly demonstrated a local control rate of 97.2%. The risk of grade 3-4 toxicities was only 1.5% with an average eGFR loss of 7.7 mls/min. The feasibility of SABR in 81 uninephric patients was demonstrated by Correa et al. with an eGFR loss of only 5.8 and none of the patients undergoing SABR requiring dialysis. The local control rate was 98.0%, distant control rate was 95.7%, cancer-specific survival was 98.2% and overall survival was 81.5%. Siva et al. recently reported on SABR in patients with T1b or worse primary renal cell carcinoma. While “any failure” rates were worse in patients with masses >4 cm, compared to those <4 cm, this was due to higher incidence of distant failures, but not local failures. A Canadian report by Swaminath et al. demonstrated that SBRT results in well-preserved quality of life in the weeks to months following treatment for primary kidney cancer. A cost analysis by Donovan et al. demonstrated that SBRT, as compared to radiofrequency ablation, was economically more cost-effective. The current NCCN guidelines state that: “SBRT may be considered for medically inoperable patients with Stage 1 kidney cancer (category 2B), with Stage II/III kidney cancer (both category 3). 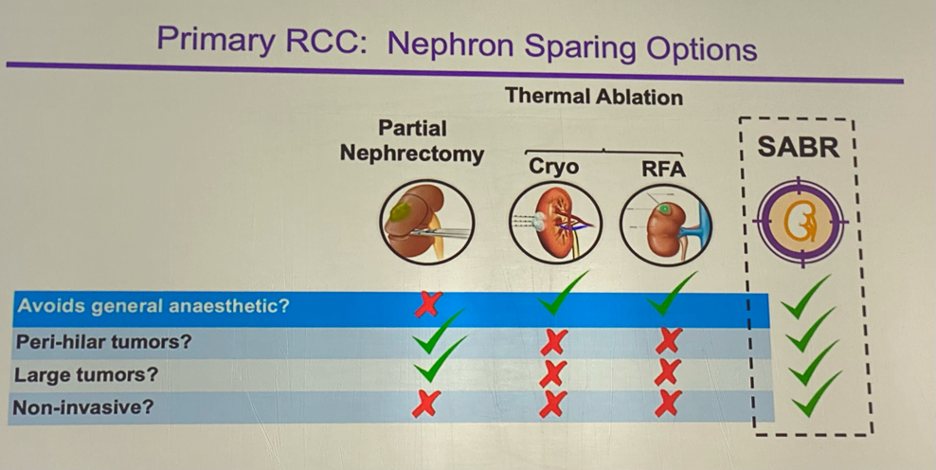 Dr. Landman was next tasked with discussing the role of AS in the management of T1a renal masses. He began by discussing the various indications for AS, as outlined by the different guidelines. The AUA currently endorses AS as an option for initial management of masses <2 cm (conditional, C) with contrast enhanced CT or MRI =/-US every 3-6 months for surveillance. 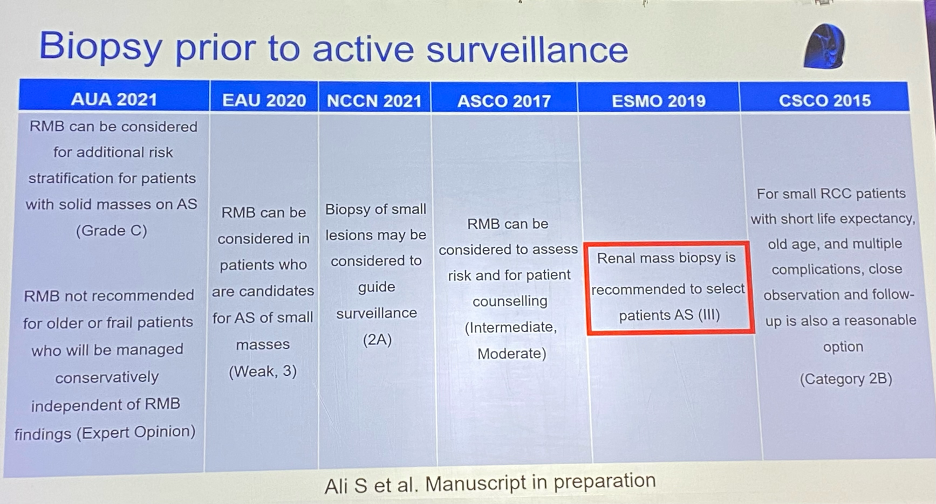 Indications for delayed intervention similarly vary between guidelines, with the 2021 AUA guidelines outlining the following:

AS guidelines are based on poor data, and uniquely on non-biopsy driven AS standard. They are, for the most part, indicated for unhealthy patients with tumor sizes 2-4 cm and imaging standards are poorly defined. Dr. Layman went on discuss his center’s experience with biopsies for small renal masses: Biopsy Informed active surveillance (BIAS). This was a single center retrospective review of T1a cortical neoplasm patients who underwent pre-treatment biopsy between May 2013 and August 2019. A biopsy was performed for 192 patients prior to any intervention (ablation or extirpation) or who wanted to understand biology prior to entering active surveillance. 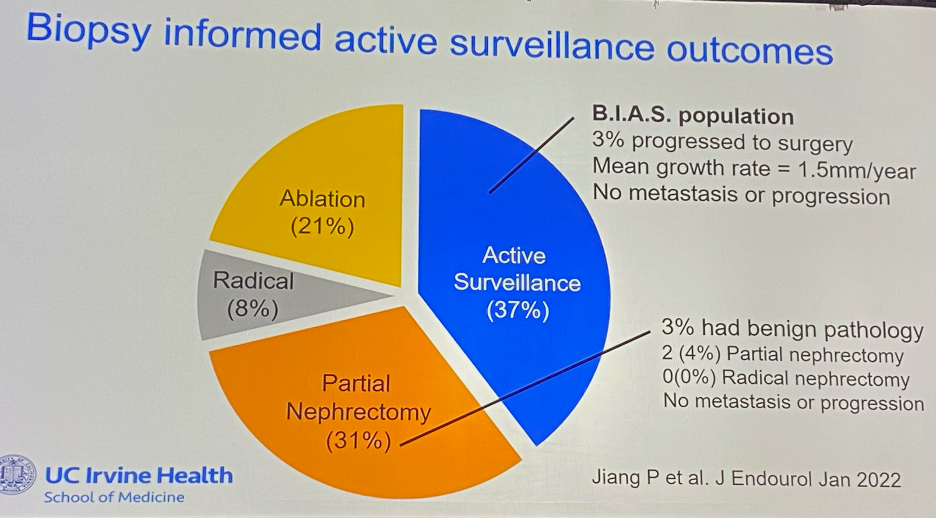